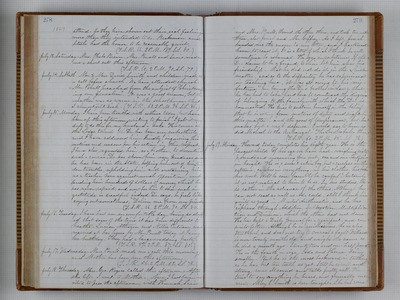 1867. attend. So they have shown out their real feelings more than they intended to do. Brakeman and Steele had the honor to be reasonably quiet. (T.S.R. 66. 2 P.M. 89. S.S. 80.) July 13. Saturday. Mrs. Phebe Brown, Mrs. Powell and Susie made me a short call this afternoon. (T.S.R. 60. 2 P.M. 90. S.S. 79.) July 14. Sabbath. Mr. & Mrs. David Smith and children made us a call before church. We have attended church. Mr. Powell preached from the subject of "Christ weeping over Jerusalem." It was a good sermon, but the weather was so warm in the schoolhouse, that I almost felt sick. (T.S.R. 61. 2 P.M. 96. S.S. 86.) July 15. Monday. I have been troubled with asthma today, but have been up this afternoon writing to Josiah. I felt it my duty to do this for my husband's sake. His course in the Lodge towards the Dr. has been very unbrotherly, and I have addressed him kindly, inquiring his motives and reasons for his action in this respect. I have also requested him, as a brother, to discontinue such a course, Dr. has shown him every kindness since he has been in the State, helping him out of his Linden troubles, upholding him and sustaining him as a teacher here against much opposition, and lending him hundreds of dollars of money which he has never repaid, and now for him to show such in gratitude is dreadful indeed. Dr. says, he feels like crying out sometimes, "Deliver me from my friends," (T.S.R. 66. 2 P.M. 90. S.S. 80.) July 16. Tuesday. I have had an uncomfortable day, being so stuffed that some of the time it has been difficult to breathe. Lucien Atheam and Nellie Putnam were married at her home by Mr. Powell today, it being her birthday. They had a large wedding party. (T.S.R. 59. 2 P.M. 87. S.S. 80.) July 17. Wednesday. Mrs. Powell made me a call this morning, and Mother has been here this afternoon. (T.S.R. 56. 2 P.M. 83. S.S. 78.) July 18. Thursday. Mrs. Geo. Rogers called this afternoon. After she left I went to Mother's, where I had been invited to pass the afternoon, with Hannah, Susie, and Mrs. Powell. Found the others there, and took tea with them, also Josiah and Mr. Geffroy. As I left, Josiah handed me the answer to my letter, and I hastened home to read it. It is a letter of which I think he will sometime be ashamed. He says in substance. If the Dr. claims to be a friend to him let him show his friendship - that he did not do it in the Linden matter, and as to the difficulty he has experienced in teaching here, it was all owing to his "misfortune" in being the Dr.'s brother-in-law:- that he has had to labor hard here to counteract the "disgrace" of belonging to the family with which the Dr. is connected. He tries to sustain himself in the belief that he is acting from motives of duty and right in this matter, and the good of temperance, but he makes but a weak defence. I would say to him as did Michael to the Archangel. "The Lord rebuke thee". (T.S.R. 60. 2 P.M. 85. S.S. 78.) July 19. Friday. Howard today completes his eighth year. He is the largest child of his age we have had, weighing sixty pounds and measuring four feet, one and one half in in height. He is a smart active boy, but careless in the extreme, careless in everything, in his clothes, his books his work. Will he ever learn to be careful? Certainly it is not natural to him to be so. In his studies, he is rather in the advance of the others. Although he can not read as well as Ada could, still I think him quite as good in Mental Arithmetic, and he has ciphered through Addition, Subtraction, Multiplication and Division, which the others had not done. He has kept a Daily Journal for a year past, and can write letters. Although he is mischievous, he is also truthful, and does not try to conceal a fault Willard is now twenty months old, and weighs the same as he did a month ago twenty two and one-half pounds. He is the fourth in size, Ada and Horace being smaller. But he is the most backward in teething as he has but ten teeth as yet. Still he is well and strong, runs M round and talks pretty well. He tries to say anything he hears, and generally succeeds. Mary E. Smith is here tonight. She has come