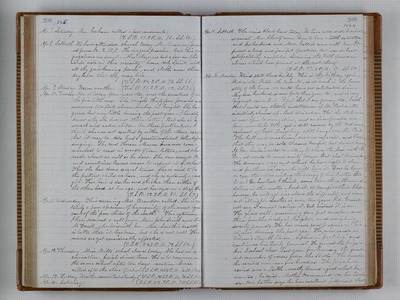 1866 Apr. 7. Saturday. Mrs. Gorham called a few moments. (T.S.R. 51. 2 P.M. 76. S.S. 64.) Apr. 8. Sabbath. We have attended church today. Mr. Guernsey preached from Is. 3. 10, 11. He is a good preacher, but his congregations are small. Alas! there are but a few on the Lord's side in this vicinity. "Come Holy Spirit," with all thy quickening powers," and clothe a new these dry bones, that they may live. (T.S.R. 54. 2 P.M. 78. S.S. 66.) Apr. 9. Monday. Warm weather. (T.S.R. 51. 2 P.M. 82. S.S. 71.) Apr. 10. Tuesday. Ida is today four years old, and the smallest of all the five little ones. She weighs thirty four pounds and measures two feet, eleven inches in height. She has grown but very little during the past year. I hardly know why she does not thrive better. But she is a smart and active child. In these particulars, I think she was not excelled by either of the others, except that it may be Ada had a greater natural talent for singing. She and Horace Mann have now commenced to read in words of four letters, and she reads about as well as he does. She can count 12, and sometimes learns verses to repeat at S. school This she has done several times. She is said to be the prettiest child we have, and she is certainly a good girl. Her hair is darker and thicker than either of the others had at her age, and her eyes are a deep blue (T.S.R. 52. 2 P.M. 81. S.S. 67.) Apr. 11. Wednesday. This morning Mrs. Brandon called. She is certainly a poor specimen of humanity, of the most ignorant of the "poor whites of the South." This afternoon, I have received a call from Mrs. John Smith and Tira McDowell, who lives with her. Mrs. Smith's health is better than it has been, but she is not well. Her nerves are yet considerably affected. (T.S.R. 54.2 P.M. 73. S.S. 62.) Apr. 12. Thursday. Miss Mill's school closed today. She had no examination. Josiah dined here. He is to commence the same school after ten days vacation. Susie called after the close of school. (T.S.R. 45. 2 P.M. 70. S.S. 64.) Apr. 13. Friday. Weather somewhat cloudy. (T.S.R. 48. 2 P.M. 70. S.S. 60.) Apr. 14. Saturday. (T.S.R. 52. 2 P.M. 75. S.S. 66.) 1866 Apr. 15. Sabbath. The wind blows hard today. We have attended S. school as usual. Mrs. Christy came here to have a tooth extracted and her husband and Mrs. Gallies came with her. It proved a long and painful operation, but was at last satisfactorily completed. Loosening the tooth opened an abscess which had formed at the root therof. (T.S.R. 57. 2 P.M. 67. S.S. 54.) Apr. 16. Monday. Wind still blows briskly. This is the birthday again, but as Mr. Peters the Carpenter, is at work in the lower story of the house, we could have no celebration dinner. My dear husband is now forty three years old, and is very frequent remark is, "I feel that I am growing old." I wish that I could say that the indebtedness of Ste. Pert matter is entirely cleared up. But it is not so. Tho’ the Mok. river is now open to navigation, and an incorporated company now take tolls, yet a debt caused by the bad management of Capt. Bradbury, still hangs over the Pert. The hull and machinery are now separate, and I hope that they may be sold to some benefit, but do not know If Geo. Locke would be willing to share the loss with the Dr., it could be more easily borne. But also! it is not so He demands every cent which he has a right to claim and furthermore says he will have it. Does he know or care that it is wasting the energy of his brother thus to do? Dr. has lost I think, some two or three thousand dollars in this matter - lost it to benefit others. I hope however, he will yet rise abowe the difficulty, and come out "all right." Luther is now ten years old. I need not say I cannot realize it, but indeed it is so. He grows well - measuring four feet and four and three-fourths inches in height, and weighing seventy pounds. He has made good progress in his studies during the past year. He now reads in Wilson's Fourth Reader, ciphers in "fractions" and continues his Daily Journal. He gained the prize in his S. school class last year for learning the greatest number of verses from the Bible. The number he recited was near five hundred. The prize he received was a Bible - neatly bound - just - what he wanted, he said. Mother Hammond was his teacher. His father says he has excellent judgment about