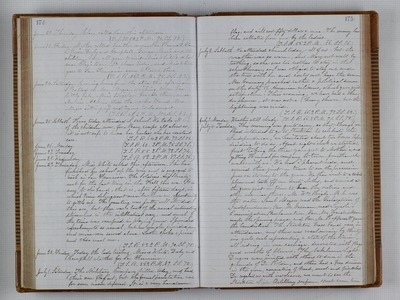 June 22. Thursday. Clara called here this afternoon. (T.S.R. 54. 2 P.M. 91. S.S. 78.) June 23. Friday. Mother called here this morn. She, Hannah, Clara, Misses Derby and Campbell, George, Susie and the children, have all gone to visit Miss White's school near Clay's Bar. It closes today, and Miss White goes to San Francisco soon to teach there. (T.S.R. 56. 2 P.M. 95. S.S. 83.) June 24. Saturday. Coming home from the store this afternoon, I called on Mrs. Magee, wishing to see her little babe, Miss Bigelow boards there, and Melissa Atkins does the work. Found Mrs. Magee sitting up and trying to be smart. (T.S.R. 61. 2 P.M. 100. S.S. 83.) June. 25. Sabbath. Have today attended S. school. We take all six of the children now, for Mary creeps all about so, it is not safe to leave her unless she has constant care. (T.S.R. 64. 2 P.M. 99. S.S. 80.) June 26. Monday. (T.S.R. 60. 2 P.M. 95. S.S. 76.) June 27. Tuesday. (T.S.R. 55. 2 P.M. 93. S.S. 74.) June 28. Wednesday. (T.S.R. 52. 2 P.M. 89. S.S. 75.) June 29. Thursday. Miss White called this afternoon. She has finished her school up the river and is engaged to teach in San Francisco. The Soldiers' Aid Society met for the last time in the Hall this eve. It is now to disband, that is, after fifteen days, in which time delinquent members have an opportunity to settle up. The meeting was pretty well attended this eve, but there was a lack of the usual interesting stimulus in the intellectual way, and much of the time was occupied in playing gamed. I provided refreshments as usual, but no one else provided any and mine were served alone. Luther spoke a piece and Ada read one. (T.S.R. 53. 2 P.M. 92. S.S. 75.) June 30. Friday. Today the lady teachers, Misses White, Deby and Campbell started for San Francisco. (T.S.R. 55.2 P.M. 89. S.S. 72.) July 1. Saturday. The Military Company drilled today, and had their new flag out, but the formal presentation was for some reason deferred. It is a very handsome flag, and will cost fifty dollars or more. The money has been collected from and by the ladies. (T.S.R. 55. 2 P.M. 86. S.S. 76.) July 2. Sabbath. We attended church today - all of us - but the weather was so warm, and Mary not well by teething, so she was too restless to stay in the schoolhouse, so I was obliged to stay out under the trees with her and could not hear the sermon Mr. Guernsey preached rather a political sermon on the duty of American citizens, which gave good satisfaction. This evening, we have had a thunder shower, it was not a heavy shower, but the lightening was vivid. (T.S.R. 65. 2 P.M. 97. S.S. 82.) July 3. Monday. Weather still cloudy. (T.S.R. 65. 2 P.M. 91. S.S. 72.) July 4. Tuesday. This morning was quite rainy, so that, though we had intended to go to Stockton to celebrate the Independence, we hesitated about two hours before deciding to do so. About eight o'clock we started, first taking the three youngest to Mother's, and getting Hannah for company to town, Jonathan also went with us. We had a pleasant ride, and arrived there just in time to see the procession pass on its way to the grove. We then went to a retired place and took off our dusty clothes, and arrived at the grove just in time to hear the oration and other exercises there. Mr. Wm Higby, M. C. was the orator. Saml Meyers read the declaration of Independence, Rev. Mr. Gasmam read Lincoln's Emancipation Proclamation, Rev, Mr. Hendrickson made the opening prayer and Rev. Mr. Happersett gave the benediction. The Stockton brass band were in attendance, and there was vocal music by thirty-six girls, each representing a state of the Union, all riding in one carriage, decorated with flags and wreaths of flowers. The Mokelumne Light Dragoos were invited with others to dine in the grounds of Dr. Holden, and others had a free dinner in the grove, consisting of bread, meat and pickles, Dr. regaled as with ice-creams, we went to see the Stockton Light Artillery perform, spent some time