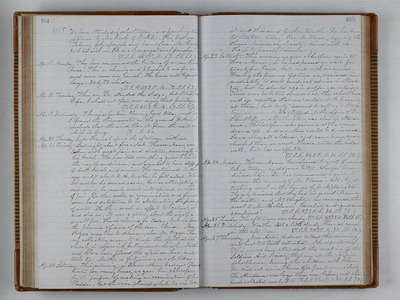 1865We have attended S. school today, and preaching this afternoon by Mr. Crosby of Stockton. His text was, "Toke my yoke upon you and learn of me." Mr. Crosby took tea with us. He is a Congregational preacher. (T.S.R. 45. 2 P.M. 69. S.S. 61.) Apr. 17. Monday. They have command the building of our new brick house. This is cheering and pleasant to me for we need more room very much. The house will be quite large, 34 by 38 inside. (T.S.R. 47. 2 P.M. 73. S.S. 63.) Apr. 18. Tuesday. This eve Dr. attended the Lodge, but I did not I fear I shall not often now enjoy that privilege. (T.S.R. 45. 2 P.M. 67. S.S. 57.) Apr. 19. Wednesday. The wind has been blowing hard today, and as I found the thermometer on the ground broken, I conclude that the wind blew it from the nail on which it hung. (T.S.R. 44. Apr. 20. Thursday. Sister Hannah spent the afternoon with me. Apr. 21. Friday. Last night about five o'clock, Horace Mann was taken with great pain and distress, seemingly in his bowels. He vomited every thing given him in the way of medicine, and seemed to have stopping of both bowels and wine. He continued in this way until about 2. A.M. when he fell asleep. When he awoke he seemed easier, but on attempting to void urine, he nearly went into sparms, on account of pair. Dr. then made an examination and found some hard substance to be obstructing the passage of water. He then made an effort to extract it and did so. It was a stone, about the size of a small pea. He is relieved for today, but we fear the presence of more of the same kind. Mrs. Rogers was here to dinner, also Mr. Rogers. They are collecting money to drape the Methodist church in mourning for President Lincoln. Mother and Clara have passed the afternoon here, and took tea. Mother is forty nine years old today. Apr. 22. Saturday. This morning, as Horace Mann had not pass water for many hours, we gave him chloroform for the purpose of making an examination of his bladder, but the urine flowed while he was taking it and this saved further trouble. Dr. has been to Stockton today. Rev. Mr. Warren, agent of the Home Missionary Society, dined with us. He is to preach tomorrow. Apr. 23. Sabbath. This morning we gave chloroform again to Horace Mann, as he had passed no water for twenty four hours, but met with no success. Fearing the presence of stone we, decided immediately to seek medical advice in Stockton, lest he should again suffer convulsions. There were to be two sermons at the schoolhouse and we regretted that we could not be present at them, but duty seemed to call us to Stockton, so we went. We stopped at the office of Dr. Shurtleff, and Dr. Langdon was also in attendance, Chloroform was given and the urine drawn off, and no stone could be discovered. So we were all relieved, and came home more cheerful than we went. Horace stood the ride well, but has no appetite. (T.S.R. 44. 2 P.M. 84. S.S. 72.) Apr. 24. Monday. Horace Mann has relieved himself of urine twice today, and seems better. Lawyer Green dined here. Dr. has commenced a suit to recover the amount of Mr. Eldred's bill, by attaching wool in the hands of J. McNaughton. The jury decided that they had no jurisdiction in the matter, and McNaughton has consigned the wool to Mr. Kohlman. Rascality and ignorance combined! (T.S.R. 49. 2 P.M. 84. S.S. 75.) Apr. 25. Tuesday. The afternoon was cloudy. (T.S.R. 49. 2 P.M. 78. S.S. 65.) Apr. 26. Wednesday. Weather still a little cloudy. Hannah came in this afternoon. (T.S.R. 55. 2 P.M. 75. S.S. 64.) Apr. 27. Thursday. Miss Addie Andrews called this morning and had two teeth extracted. She is quite deaf. This eve we have attended the meeting of the Soldier's Aid Society this eve at the Alpine schoolhouse, leaving the children with Clara. We did not arrive home till past one o'clock. The attendance was larger than ever before, and the funds collected nearly $ 16. (T.S.R. 56. 2 P.M. 80. S.S. 73.)