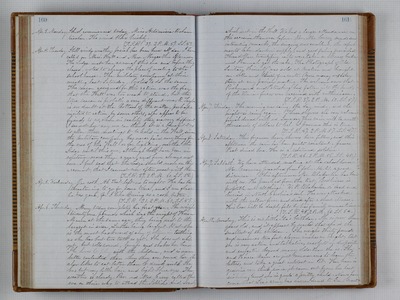 Apr. 3. Monday. School commenced today, Miss Artemisia Behan teacher. The wind blows briskly. (T.S.R. 39. 2 P.M. 59. S.S. 52.) Apr. 4. Tuesday. Still windy weather. Josiah has been here all day. I have called on Mrs. Kett and Mrs. Magee this afternoon. The Lodge met here as usual this eve and before they closed, voted to change the place of meeting to the schoolhouse. The military company at their meeting last Saturday, voted to do the same. The reason assigned for this action was the fear that the Hall was too weak to stand, but the true reason is probably a very different one R. Taylor is no doubt at the bottom of the matter, perhaps incited to action by some others, who appear to be friends to us, when in reality they are very different. I see not how any one can think it is a benefit to us to allow these meetings to be held in the Hall, since the military company has never paid anything for the use of the Hall or for lighting, neither the Lodge until this eve, although both have been in existence more than a year and have always met here. I feel sad that the Lodge should move on this account, that I cannot now often meet with them. (T.S.R. 37. 2 P.M. 60. S.S. 52.) Apr. 5. Wednesday. Our cook, Ah Teet, left us tonight. He has been threatening to go for some time, and I am glad he has gone, for I like Quing as a cook, better. (T.S.R. 31. 2 P.M. 60. S.S. 55.) Apr. 6. Thursday. Mary today completes her first year. She weighs twenty one pounds which was the weight of Horace Mann at the same age, they being next to the largest in size, Luther being largest. But she is the most backward of any of them in teething, as she has but two teeth as yet. She does not creep yet, but rolls round, laughs and shakes her head. She loves to play with the children, and is never better contented than when they are round her. She also likes to eat better than to drink milk. She has but very little hair and light blue eyes. The weather is cloudy. Rev. and Mrs. Curry called this eve on their way to attend the Soldiers' Aid Society which met in the Hall. We had a larger attendance on this occasion than ever before. Rev. Mr. Curry made some interesting remarks, the singing was excellent, the refreshments abundant in supply, and good feeling prevailed. Three dollars, twenty five cents were taken on a Guess Cake and Hannah got the cake. The Photograph of "Old Santary Himself" was sold at Auction and brought one dollar and thirty five cents. More money was taken thank at any previous meeting. The welcome news that Richmand and Petersbury had fallen into the hands of the Union forces was received with enthusiasm. (T.S.R. 37. 2 P.M. 62. S.S. 57.) Apr. 7. Friday. The morning was rainy, the day windy, and the night is rainy again. These showers are very welcome Josiah dined with us. Some say this rain will be worth thousands of dollars to Cal. I presume this is true. (T.S.R. 47. 2 P.M. 57. S.S. 47.) Apr. 8. Saturday. This forenoon heavy showers have fallen, and this afternoon the rain has been quite constant. James Peal dined here. He is a returned soldier. (T.S.R. 46. 2 P.M. 56. S.S. 45.) Apr. 9. Sabbath. We have attended meeting at the schoolhouse. Mr. Guernsey preached from John. 14. 21. a good discourse. This afternoon Mr. Blakeslee has been with us. He preached from the text. "Godliness is profitable unto all things." W. P. Blakeslee is dead and buried in North Carolina's soil. He was attacked with the yellow fever and died after a short illness. His loss will be deeply felt by his family connections. (T.S.R. 45. 2 P.M. 62. S.S. 54.) Apr. 10. Monday. This is our little Ida's birthday. She is now three years old, and it appears by record that she is the smallest of the children. She weighs thirty pounds and measures two feet, eleven inches in height. But she is very active and talkative, resolute in disposition and energetic beyond many older than she is. She and Horace Mann are just commencing to learn the letters, and take a great interest in it. Her hair is growing very thick since it came out from her last sickness, and she is quite a pretty child. News have come that Lee's army has surrendered to Gen. Grant.