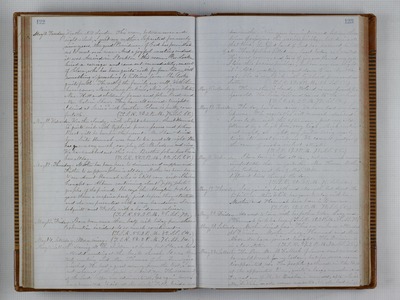 May 10. Tuesday. Weather still cloudy. This morn, between seven and eight o'clock, I met my mother, separated for nearly nine years, the good providence of God has permitted us to meet once more. And a joyful meeting indeed it was. Arrived in Stockton this morn, Geo. Locke hired a carriage and came out immediately, on acct. of Clara, who has been quite sick for four days, with something approaching to billions fever. She looks quite feeble. The rest of the family are well. With them have come, Miss Lucy Perkins, Miss Lizzie White, Mrs. Hett and children, James and John Reed and Mr. Calvin Shaw. They have all arrived tonight. I dined at Susie's with mother. Clara is pretty comfortable. (T.S.R. 53. 2 P.M. 75. S.S. 68.) May 11. Wednesday. Weather cloudy, with slight showers. Aunt Hannah is quite sick with typhoid fever. James and John Reed will be here for the present. Mr. Shaw dined here. Sister Hannah was here to tea and all night. She has grown very much, can play the Melodeon and sing. We have walked out this eve. Brother John has been here all day. (T.S.R. 58. 2 P.M. 80. S.S. 68.) May 12. Thursday. Mother has been here to dinner and supper and Father to supper - Johnnie all day. Mother has been down to see Aunt Hannah who is still very sick. She has brought an Album containing about fifty photographs of the friends. She says the Abington people gave them a surprise party just before they started, and she was presented with a very handsome album bedquilt and Father with a handsome valisse. (T.S.R. 58. 2 P.M. 86. S.S. 70.) May 13. Friday. I have been more than half sick today from sheer exhaustion incident to so much excitement. (T.S.R. 55. 2 P.M. 83.S.S. 64.) May 14. Saturday. Morning. (T.S.R. 58. 2 P.M. 76. S.S. 64.) May 15. Sabbath. Leaving all the children at home but Ida, we have attended meeting at the brick church. It was Quarterly meeting and Mr. Thomas of San Francisco preached. He had a good sermon from the text, "I am not ashamed of the gospel of Christ," etc. The sacrament of the Lords' Supper was administered. Yes again have I been permitted to sit at the Lord's Table beside my dear mother. Nine years have intervened between these times of enjoying this precious privilege, but during all that time, the good hand of God has preserved us both & all. Thankfulness filled my heart today as I recalled His great goodness, and tears of joy over flowed my eyes. I love this precious privilege, how can any one slight it? After meeting we went down to see Aunt Hannah. She is very sick with typhoid fever, and no better. (T.S.R. 52. 2 P.M. 81. S.S. 65.) May 16. Monday. The weather is cloudy. Roland is now twenty two years old. He teams here and learns to the mines. (T.S.R. 58. 2 P.M. 77. S.S. 64.) May 17. Tuesday. The day has been rainy. We have had very heavy showers. The vegetables will be much refreshed. I was taken sick this afternoon, first very cold followed by a high fever, very high, which continued nearly all night, my pulse being nearly twice its usual quickness. We cannot judge of the cause of such a violent attack. (T.S.R. 59. 2 P.M. 75. S.S. 56.) May 18. Wednesday. I have been in bed all day, but am much more comfortable than on yesterday. Mrs. Harrer, Mother Lucy Perkin's, and Rev. & Mrs. Miller have called at different times through the day. (T.S.R. 50. 2 P.M. 76. S.S. 64.) May 19. Thursday. I am gaining health and strength, but Aunt H. is failing. Miss White has gone to stay with her. Mother and Hannah have been in to see me. (T.S.R. 52. 2 P.M. 77. S.S. 65.) May 20. Friday. Ada went to town with her father today. Lucy and Hannah took tea here. (T.S.R. 50. 2 P.M. 86. S.S. 75.) May 21. Saturday. Mother dined here. This eve we have attended the Division. Mother, Lucy, Hannah and Mrs. Alexander have joined tonight. The Division is in a low state. (T.S.R. 57. 2 P.M. 94. S.S. 75.) May 22. Sabbath. The Rev. Mr. M’Calloch of Sonora sent us word he would preach for us today, but for some reason disappointed us, The people gathered in the Hall at the appointed time, quite a large number and Dr. read one of H. W. Beecher's sermons, after which Mr. T. Wiley made some remarks, we also had singing