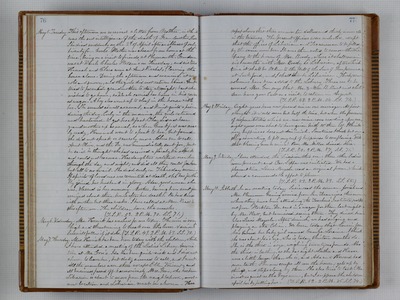 May. 5. Tuesday. This afternoon we received a letter from mother, in which was the sad intelligence of the death of Grandmother Shan. She died suddenly on the 2nd of April after an illness of only twenty four hours. Mother was absent from home at the time, being on a visit to friends at Plymouth. Grandma was at Uncle Charles Stetson's on Tuesday, and sisters Hannah and Clara were at Aunt Rachel's, leaving the house alone - During the afternoon and evening, it was cold and snowy, and the girls did not return home. Aunt tried to persuade grandmother to stay all night, but she wished to go home, so Uncle carried her home in his covered wagon. A boy also went up to sleep in the house with her. She seemed as well as usual, and knit quite a price during the day. Early in the morning, the girls returned and hastened to get breakfast. They did not hear grandmother up as usual, so when breakfast was nearly ready, Hannah went to speak to her, but found she did not speak or scarcely move. Clara ran to call Aunt Olive, and the Dr. was immediately sent for, but he said he thought she had received a paralytic shock and could not recover. Her daughters watched over her through the day and night, and did all they could for her but all to no avail. She died early on Thursday morning. If spirits of loved ones are re-united at death, she has probably joined her husband in glory. A dear, good woman she was, blessed is her memory. Mother, having been sent for arrived about three hours after her death. She had lived with mother but three weeks. I have called at Mrs. Read's this afternoon. The children have the measles. (T.S.R. 53. 2 P.M. 90. S.S. 71.) May. 6. Wednesday. Mrs. Herrick has washed for me today. The river is very high and threatening to break over the levees. A serious loss will follow if it does. (T.S.R. 49. 2 P.M. 83. S.S. 70.) May 7. Thursday. Mrs. Herrick has been here today with the children, while I have attended a meeting of the Ladies' Library Association at Mr. Gove's. Ida has been quite sick and I did not choose to leave her, but duty seemed to call, and I went. All the members were there except Ellen Vincent; and all business passed off harmoniously. Mrs. Gove, who has been Librarian is about to move from the neighborhood, and new location and Librarian must be chosen. Her report shows that there are now ten dollars and thirty seven cts. in the treasury. The present officers were re-elected, except that the offices of Librarian and Treasurers are to be filled by the same member. It was then voted to remove the Library to the house of Mr. Boody, where it shall remain six months with Mrs. Boody as Librarian, afterwhich time it shall be taken to the Hall of the Sous of Temperance at Lockeford, and I shall then be Librarian. Thirty new volumes have been added to the Library. These are to be covered. Mrs. Gove says that Mr. & Mrs. B. Burt and children have gone East on a visit, to return in August. (T.S.R. 48. 2 P.M. 84. S.S. 74.) May 8. Friday. Eight years have now passed since our marriage. At first thought it would seem but half the time, but when the pressure of responsibilities which are now mine come crowding upon me, eight years seem short to have given birth to them all. I think my happiness does not diminish. Sometimes I think but one thing is wanting to fill my cup of happiness to overflowing. Well that blessing ever be mine? Rev. Mr. Miller dined here. (T.S.R. 50. 2 P.M. 87. S.S. 71.) May 9. Saturday. I have attended the Division this eve - three other ladies were present and Geo. Lippe was initiated. We had a pleasant time. Lewis Megerle read an original poem, which showed a commendable effort to please. (T.S.R. 52. 2 P.M. 83. S.S. 65.) May 11. Sabbath. In our meeting today, Susie read the sermon. Josiah and Mr. Plummer having arrived from San Francisco this morn where they have been attending the Teachers' Institute, walked out from Stockton. Dr. sent in a wagon for them last night by Mr. Hett, but he missed seeing them. They dined here also Lewis Megerle. After dinner, we had singing and playing on the Elian. We leave today that Cousin Joan has buried her baby girl named Eunice Loraine. I think she was about Ida's age, who is today thirteen months old. She is the third in size, weighing twentyone pounds. Also the third in teething, as she has eight - Luther and Horace were a little larger than she is, and Ada and Howard had more teeth. She now creeps all over the house; gets up by things, and steps along by them. She also tries to talk. She is not so quiet as the boys were, but I suppose the children spoil her by petting her. (T.S.R. 52. 2 P.M. 85. S.S. 74.)