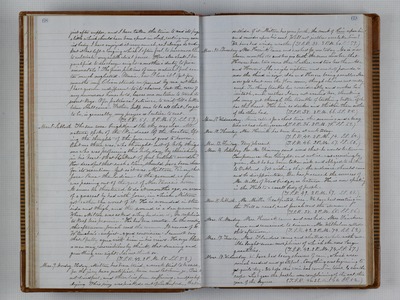 just after supper, and I have taken the time to read its page a little which should have been spent in sleep, resting my wearied body. I have enjoyed it very much, as I always do reading But it has left a longing which I often fed, to have more time to cultivate my intellectual powers. How else shall I be qualified to discharge might a mother's duty to five immortals? The finer portions of my nature I feel are too much neglected. Music, how I love it! Yet for months my Elian stands unopened by me, not that I have grown indifferent to its charms, but the care of my numerous household, leaves me no time to touch its sweet Keys. O for patience! patience to wait till a better time shall come. Father, help one to be all that I ought to be, is generally, my prayer as I retire to rest. (T.S.R. 51. 2 P.M. 67. S.S. 59.) Mar. 8. Sabbath. The sun rose brightly and the sky was clear. All nature spoke of the kindness of the Creator, lifting the thoughts of the pure and good to heaven. But one there was, who thought not of holy things one who was profaning this holyday, by cherishing in his heart that blackest of foul intents murder. How dreadful that such a time should have been chosen for its execution. Yet as it was. Milton Vance, shot for Rana-the Indian to the ground, as Jose was passing out of the yard of Mr. Vance's home. It seems he threatened to do it months ago, on account of a quarrel he had with Jose, in which Milton got rather the worst of it. He is wounded in the side and thigh, and the wound is a dangerous one. When Milton was asked why he did it, he replied "to keep his promise." He has been arrested. In the meeting this afternoon, Josiah read the sermon. It was one of H. W. Beecher's subject a good conscience. I cannot say that I fully agree with him in his views. He says that a man may conscientious by think that dancing and gambling are right. I do not think so. (T.S.R. 42. 2 P.M. 65. S.S. 53.) Mar. 9. Monday. Today. Milton has been tried, a mock trial to be sure, for the jury have justified him and let him go. O is it not dreadful, and there lies Jose suffering, and perhaps dying. This jury was picked out of Lockeford, that is, outside of it. Milton has gone forth, the mark of Cain upon him and murder upon his soul. Will not justice overtake him? We have had windy weather. (T.S.R. 38. 2 P.M. 60. S.S. 57.) Mar. 10. Tuesday. Mrs. Herrick came and washed for me today. Ida is now eleven months old and has six teeth the same number that Horace had, two more than Luther, and two less than Ada and Howard. She weighs eighteen and one half pounds, is now the third in size. Ada and Horace being smaller. She now gets about over the floor some, though she does not really creep. Teething troubles her considerably and makes her irritable, and restless. I have not weaned her, thinking she may get through the trouble of teething better, if she has the breast. Her hair is darker and thicker than either of the others had. (T.S.R. 38. 2 P.M. 66. S.S. 55.) Mar. 11. Wednesday. Susie called for a short time this evening, and a busy time we had chatting as usual (T.S.R. 36. 2 P.M. 71. S.S. 63.) Mar. 12. Thursday. Mrs. Herrick has been here at work today. (T.S.R. 40. 2 P.M. 74. S.S. 64.) Mar. 13. Friday. Very pleasant. (T.S.R. 46. 2 P.M. 67. S.S. 60.) Mar. 14. Saturday. Rev. Mr. Finney sent word that he would lecture on Temperance here tonight, and notice was accordingly given. But he has been taken sick and obliged to return to Oakland. Not wishing that the audience should come and be disappointed, Dr. has procured the services of Mr. Miller of Woodbridge, as lecturer. He is now speaking in the Hall to a small body of people. (T.S.R. 49. 2 P.M. 67. S.S. 58.) Mar. 15. Sabbath. Mr. Miller breakfasted here. We have had meeting in the Hall as usual, and Josiah read the sermon. (T.S.R. 38. 2 P.M. 65. S.S. 56.) Mar. 16. Monday. Mrs. Herrick came and washed. Mrs. Fincher came and remained to dinner. Mr. Wilhelm called this afternoon. (T.S.R. 43. 2 P.M. 74. S.S. 63.) Mar. 17. Tuesday. Mrs. Flanders came and chatted awhile with me. She bought some morphine of which she uses large quantities. (T.S.R. 42.2. P.M. 74. S.S. 67.) Mar. 18. Wednesday. We have had heavy showers of rain, which were much needed and grateful. Everything was beginning to get quite day. We hope this rain has come in time to save the crops. Last year the people were complaining of the wet, this year of the dryness. (T.S.R. 46. 2 P.M. 60. S.S. 52.)