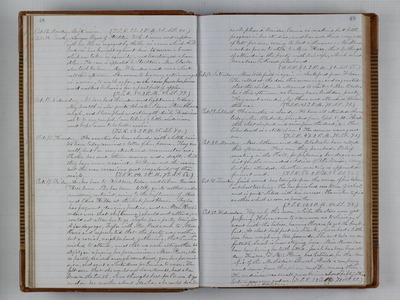 Oct. 13. Monday. Quite warm. (T.S.R. 53. 2 P.M. 86. S.S. 80.) Oct. 14. Tuesday. Lawyer Byers of Stockton took dinner and supper with us. He is engaged by the Dr. in a case which A.D. Goodwin has brought against him to recover a horse which was taken in security, and has strayed or been stolen. The case is appealed to Stockton. Mr. Clark also look tea here. Mrs. Flanelees made me a short call this afternoon. She seems to be a very active, energetic woman, to walk so far, as she came from her home and walked to Susie's for a pail full of apples. (T.S.R. 50. 2 P.M. 86. S.S. 79.) Oct. 15. Wednesday. We have had thunder and lightning today. My health is now quite delicate. I have a trouble some cough, and I lose flesh and strength daily. Dr. advises me to be very careful. I am taking a little medicine, and hope soon to be better again. (T.S.R. 52. 2 P.M. 86. S.S. 80.) Oct. 16. Thursday. The weather has been cloudy with a little rain. We have today received a letter from home. They are well, but in very straitened circumstances. Father has sent them money and a draft, which they have never received. We know not the cause, but the war occasions great irregularity of the mails. (T.S.R. 54. 2 P.M. 73. S.S. 62.) Oct. 17. Friday. Dr. has been to Stockton today and taken Emma Here home. She has been lately quite restless under necessary restraint, owing to the influence of Mrs. and Edna Hibbe at the Lockeford House. Taylor has frequent dancing parties, and as Mrs. Herr's orders were that she(Emma) should not attend, we could not allow her to go. Taylor has a party tonight. A few days ago, Taylor with Mr. Read went to Mrs. Herr's and represented that the party was nothing but a social, neighborhood gathering, that Emma wished to attend, and that we were altogether to strict, in refusing her permission. Mrs. Herr, who is hardly decided enough sometimes, gave her permission, and sent a white dress for Emma to wear. We felt sure that she would not have done to, had she known the truth. So we thought best for Emma to go and see her mother about it, when she could decide as she pleased. Besides, Emma is making but little progress in her studies, and has not done very well of late for me, owing to bad influence. Mr. Read went so far as to stale to Mrs. Herr, that he thought of attending the party with his wife, which must have been a direct falsehood. (T.S.R. 51. 2 P.M. 71. S.S. 66.) Oct. 18. Saturday. Miss Wakefield is again in Lockeford from Folsom. She called at the door this morning, and requested that the children be allowed to visit at Mr. Blakeslee's this afternoon, as Emmy has a birthday party. They went accordingly. Have not attended Division this eve. (T.S.R. 47. 2 P.M. 75. S.S. 71.) Oct. 19. Sabbath. The weather is cloudy. We have all attended church today. Mr. Blakeslee preached from Eph. 5. 14. "Awake thou that sleepest, and arise from the dead," etc. How like death is a slate of sin! The sermon was a good one. (T.S.R. 47. 2 P.M. 78. S.S. 71.) Oct. 20. Monday. Mrs. Athearn and Mrs. Blakeslee have called this afternoon. This eve, they have had a Relief meeting in the Hall, for preparing bandages and hid for the wounded soldiers of the Union army. But few attended. Another meeting is appointed for next week. (T.S.R. 63. 2 P.M. 86. S.S. 80.) Oct. 21. Tuesday. Josiah arrived here tonight from the scene of his labors in school teaching. He has finished one term of school, and is quite dated with his success. He wishes to find another school as soon as possible. (T.S.R. 58. 2 P.M. 80. S.S. 72.) Oct. 22. Wednesday. Very early this morn, while the stars were yet peeping, Horace came to summon us to Susie's. I went with the babies, leaving Horace to get the breakfast. At about half past six o'clock, Susie had a little son born weighing ten pounds. She and babe are comfortable. Sarah is now staying here. Miss Miner has been here having her teeth filled. Josiah has been here all day. This eve, T. Starr Hing has lectured for the benefit of the Methodist church. Quite a company went down from this place, and Dr. among them. The audience was small, numbering about fifty. The lecture was a very good one. (T.S.R. 52. 2 P.M. 72. S.S. 66.) subject Patriotism.