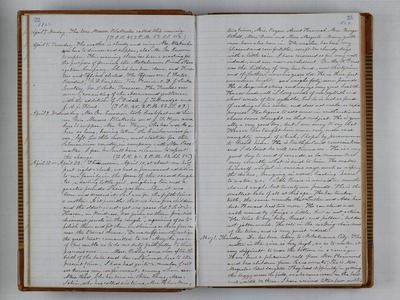 April 7. Monday. The two Messrs. Blakeslee called this evening. (T.S.R. 41. 2 P.M. 63. S.S. 58.) April 8. Tuesday. The weather is cloudy and rainy. Mr. Blakeslee was here to dinner and supper, also Mr. Geo. Emerson to supper. This evening there has been a meeting for the purpose of forming the Mokelumne River Navigation Company, which has been done, and Trustees and Officers elected. The Officers are, E. Foster, President, G. D. Compton, Vice President D. J. Locke Secretary, Geo. S. Locke. Treasurer. The Trustees are seven, consisting of the above named gentlemen with the addition of S. Diddle, J. Tallmedge and J. A. J. Flood. (T.S.R. 46. 2 P.M. 53. S.S. 49.) April 9. Wednesday. Mr. Geo. Emerson took breakfast and dinner here. Messrs. Blakeslee and J. T. Hyer were here to supper. Mr. Geo. Hyer, who has worked here so long, having taken the Cariboo mines fever, left us this morn, and started for the Salmon river country, in company with Mr. Shoemaker. I fear he will have occasion to spent the change. (T.S.R. 41. 2 P.M. 52. S.S. 55.) April 10-April 30. This morn, April 10, at about one half past eight o'clock, we had a permanent addition to our family in the form of the second daughter, a darling little girl, weighing ten and a quarter pounds. Susie was here when it was born and dressed it So I am for the fifth time a mother. Is it possible that we have five children and the oldest is not yet six years old? So it is. Heaven, in kindness, has given no these five rich diamond jewels "in the rough" requiring of us to polish them and fit them for shining as stars forever near the Eternal throne. Do we sufficiently realize the great trust committed to us? May the grace of God enable us to do our duty faithfully to these precious ones. Mrs. Kidley came soon after the birth of the babe and has continued here to the present time. I have had quite a member of callers during my confinement, among whom are Mrs. Read, who has been in three times, Mrs. Sabin, who has called six times, Mrs. H. lunker, two times, Mrs. Rogers, Aunt Hannah, Mrs. George Ethell, Mrs. Doom and Mrs. Megerle. Many gentlemen have also been in. The weather has been very pleasant and comfortable, except two cloudy days with a little rain. I have recovered so far very well indeed, and am now convalescent. On the 16th inst. was the birthday of my husband, now thirtynine, and of Luther, now six years old. He is three feet seven inches in height, and weighs forty-seven pounds. He is large and strong and enjoys very good health. He now reads well in long words of one syllable and short words of two syllables, but he is not so fond of reading as his sister, and does not make so rapid progress. He begins to sold add some in arithmetic and shows some thought on that subject. He is generally a very good boy, but I am sorry to say that Horace has taught him some very rude and naughty ways, of which, I hope by perseverance to break him. He is truthful and conscientious and I do trust he will continue so. He is a very good boy to send of errands, as he remembers very correctly what is said to him. He makes himself useful in various ways, such as wiping the dishes, bringing in wood, leading horses to water, etc. Little Horace is now sixteen months old and weighs but twenty one pound. He is the smallest babe of all at this age. He has twelve teeth, the same number that Luther and Ada had but Howard had two more. He can stand and walk around by things a little, but is not active. He tries to say "baby, bread, and pillow," but does not jabber much. He sits in the socking chair most of the time, and is very quiet indeed. May 1. Thursday. Dr. has been today to Mokelumne City. The water in the river is very high, so as to make it very difficult to cross the bottom in a carriage. Have had a pleasant call from Mrs. Rammel and her children from Sacraments. She is Mrs. Megerle's oldest daughter. They had difficulty in getting the buggy across the field, so she came across in the boat and waited for them. I have received letters from mother