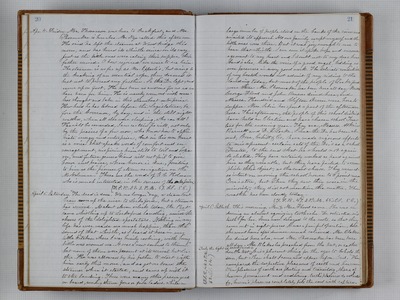 Apr. 4. Friday. Mr. Thomason was here to breakfast, and Mr. Shoemaker is here also. Mr. Nye called this afternoon. He said he left the steamer at Woodbridge this morn, and has heard its whistle since on its way. Just as the little ones were eating their supper, their father arrived. O how rejoiced we were to see him. The steamer is as far up as Mr. Epperle's, but owing to the breaking of an essential rope, they deemed it best not to proceed any farther. So the Dr. left, and came up on foot. He has been as anxious for us as we have been for him. He is nearly worn out with ceaseless thought and labor in this steamboat enterprise. How hard he has labored before the Legislature, before the Governor, by day, and in the still night watches, when all else were sleeping, who can tell? He will be rewarded, I am certain he will, not only by the praises of a few now, who know how to appreciate energy and enterprise, but in his own breast is a voice that speaks words of comfort and encouragement, inspiring him still to toil and hope on, and future generations will not fail to give honor and praise, where honor is due, pointing to him as the "pioneer of steam navigation on the Mokelumne." These are the words of G. C. Holman who is much interested in the success of the enterprise. (T.S.R. 33. 2 P.M. 67. S.S. 55.) April 5. Saturday. "The deed is done." We no longer say, a steamboat can come up the river to Lockeford, but a steamer has arrived. At about eleven o'clock today, the Pert came whistling up to Lockeford landing, amid the cheers of the delighted spectators. Nothing in my life has ever made me much happier, than the sound of that whistle, as I heard it here in my little kitchen where I was busily cooking, with my little ones around me. It was a new sound to them, but none of them were present at its arrival but Luther. He was allowed by his father to start with him early this morn, and so got on board the steamer when it started, and came up with it to the landing. There were many other passengers on board, among them four or five ladies, while a large number of people stood on the banks of the river and awaited its approach. All our family except myself and the little ones were there. But it was joy enough to me to hear that whistle. I am sure it spoke hope and encouragement to my heart and I doubt not to my dear husband's also, like the voice of a good angel, bidding us ever persevere in every good work. The delicate condition of my health would not admit of my riding to the landing today, but most of the people of Lockeford were there. Mr. Shoemaker has been here all day. Messrs George Flood and John Benson dined here, and Messrs. Hendrix and Clifton Green were here to supper. Mrs. Sabin has spent a part of the afternoon here. This afternoon, the people of this school district have held an Election and have chosen school Trustees for the ensuing year. They are, Messrs, Atkins Barnett and D. J. Locke. Since the Dr. has been absent, Gove, Cahill & Co, have made vigorous efforts to misrepresent certain acts of the Dr.'s as a school Trustee, to the end that he should not again be elected. They have certainly worked as hard against him as they were able, but they have failed to accomplish their object, as the event shows. They were also intent on moving the schoolhouse to a point near Gove's store, but when they sew they were in the minority, they did not mention the matter. The weather has been cloudy today. (T.S.R. 47. 2 P.M. 65. S.S. 56.) April 6. Sabbath. This morning, Mr. & Mrs. Flood came. She was enduring an almost agonizing toothache. Dr. extracted six teeth for her. Some were decayed to the roots, so that they came out in eight pieces. It was a painful operation, but she went home after dinner much relieved. Mr. Blakeslee dined here also, and Mr. Shoemaker has been here all day. Mr. Blakeslee preached from the text, or rather double text, Truly the light is sweet and. (T.S.R. 42. 2 P.M. 62. S.S. 54.) It is a pleasant thing for the eyes to behold the sun, but when shall I come and appear before God. "He compared the respective pleasures of earth and heaven. The pleasures of earth are fleeting and transitory, those of heaven permanent and enduring. Earth's pleasures do not satisfy, heaven's pleasures completely fill the soul with rapture.