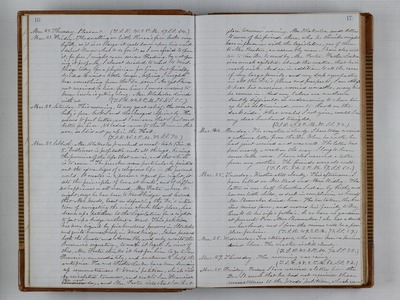 Mar. 20. Thursday. Pleasant. (T.S.R. 41. 2 P.M. 69.S.S. 64.) Mar. 21. Friday. The swelling on little Horace's face looks very badly, as it is so large it rests down upon his neck, I do not know what to do for it, as I am afraid to open it, for fear I might cause serious bleeding, by not opening it properly. I almost decided to send to Woodbridge today for a physician for him, but finally decided to wait a little longer, hoping I might hear something from the Dr. soon. As yet I have not received a line from him. I am so anxious to know how he is getting along. Mr. Blakeslee dined with us. (T.S.R. 44. 2 P.M. 76. S.S. 66.) Mar. 22. Saturday. This morning, to my great relief, the sore on baby's face broke and discharged copiously. He seems to feel better, and I am sure that I feel much better for him. No ladies came to the Division this eve, so I did not go up in the Hall. (T.S.R. 46. 2 P.M. 80. S.S. 70.) Mar. 23. Sabbath. Mr. Blakeslee preached as usual -text. /Jim. 4. 8. "Godliness is profitable unto all things, having the promise of the life that now is, and that which is to come." The preacher more particularly pointed out the advantages of a religious life in the present world. It creates in a person a regard for right, it sets the principle of love at work, and it diffuses happiness on all around. Mr. Foster is here tonight, says he has been to Woodbridge and learns that Mr. Woods, beast on defeating the Dr.'s intention of navigating the river above that place, has drawn up a petition to the Legislature for a right to put up a bridge without a draw. This petition has been signed by five hundred persons in Stockton and quite numerously in Woodbridge. It has passed both the Senate and Assembly and only awaits the Governor's signature, to make it legal. In view of this, Mr. Foster thinks it best for him to go to San Francisco immediately, and endeavor to help the enterprise. He and Father Locke have been drawning up remonstrances to Wood's petition, which will be circulated tomorrow, and sent to San Francisco the next day, and Mr. Foster ride start for that place tomorrow morning. Mr. Blakeslee sends letters to some of his friends there, who he thinks might have influence with the legislators, one of them to Mr. Benton, an assembly man. I have also written to the Dr. to send by Mr. Foster. Father Locke is so much agitated about the matter, that he is nearly sick. And so, in addition to all the cares of my large family, and my deep sympathy in all the Dr.'s plans and prospects, I am obliged to hear his anxious, worried remarks, every time he comes in. And my labors are rendered doubly difficult in endeavoring to cheer him as he is determined ever to look on the "dark side." What would I not give, could I see my dear husband tonight. (T.S.R. 47. 2 P.M. 82. S.S. 72.) Mar. 24. Monday. The weather is cloudy. I have today received a welcome letter from the Dr. When he wrote, he had just arrived and was well. The letter has been nearly a week on the way. I long to hear some later news. I have also received a letter from my mother. The friends were all well. (T.S.R. 54. 2 P.M. 69.S.S. 60.) Mar. 25. Tuesday. Weather still cloudy. This afternoon, I have called on Mrs. Read and Mrs. Ridley. The latter is one half Cherokee Indian by birth, and has one little child, as dark in complexion as herself. Mr. Shoemaker dined here. He has taken the Caribao mines fever, and moved his family to Dry Creek to his wife's father's, So we have no gardener at present, Poor Mrs. Shoemaker! she has a drunken husband, and I fear the mines will be a poor place for him. (T.S.R. 49. 2 P.M. 71. S.S. 59.) Mar. 26. Wednesday. Two strangers, who were here on business dined here. The weather is still cloudy. (T.S.R. 48. 2 P.M. 74. S.S. 58.) Mar. 27. Thursday. The morning was rainy. (T.S.R. 48. 2 P.M. 60. S.S. 52.) Mar. 28. Friday. Today I have received a letter from the Dr. It seems that he had not received those remonstrances to the Woods' petition, which were