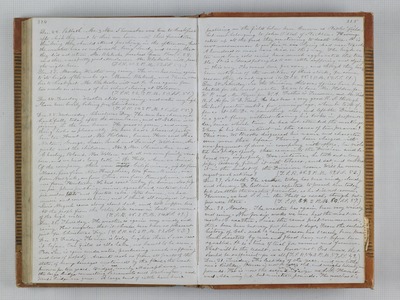 Dec. 22. Sabbath. Mr. & Mrs. Shoemaker were here to breakfast after which they went to their own house with their furniture, thinking they should attend preaching in the afternoon, but the weather was so unfavorable, being cloudy and rainy, that they did not return. Mr. Blakeslee preached from Prov. 6. 23. and there was a pretty good attendance. Mr. Blakeslee will pass the night here. (T.S.R. 46. 2 P.M. 53. S.S. 50.) Dec. 23. Monday. Weather very rainy. The river has risen again to its height of two weeks ago. Messrs. Blakeslee and Vance were here to breakfast. Mr. Blakeslee will not be here again for two weeks on account of his school closing at Fulsom. (T.S.R. 52. 2 P.M. 50. S.S. 51.) Dec. 24. Tuesday. Weather still very rainy, and water very high. I have been busily baking for Christmas. (T.S.R. 54. 2 P.M. 56. S.S. 55.) Dec. 25. Wednesday. Christmas Day. The sun has shone out beautifully today after the severe rain, and all Nature is rejoicing in the sun beams. The grass is green, and everything looks so pleasantly. We have had a pleasant party here too. Aunt and Mr. Holden, Emma Kerr and Mr. Norton, George, Susie, Sarah and David, William, Augusta and the children, Mr. & Mrs. Shoemaker and Charley, Roland, Mr. Wallace and all our own family were here, and we had a long table in the Hall, where we dined. Of the company, there were nine Californians, eight from Mass. four from New Hampshire, two from Maine, one from New York, one from Ohio, one from Pennsylvania and one from Kentucky. We had roast turkey for dinner, also pigeon pie, plum pudding, mince, squash and custard pies, pie melon tarts and frosted cake. After dinner, we had music and conversation, and I think all enjoyed it well. Lewis Megerle came along about dark, and took supper here. All the people from the other side came in boats on account of the high water. (T.S.R. 46. 2 P.M. 54. S.S. 49.) Dec. 26. Thursday. The weather is again very windy and rainy. How singular that it should have been so pleasant just for Christmas Day. (T.S.R. 46. 2 P.M. 51. S.S. 53.) Dec. 27. Friday. The river is today higher than I ever saw it before. Our field is all a lake, no land to be seen. Poor Sac. is again under water, producing much suffering and lose of property. Accounts reach us from all parts of the state, of heavy damages sustained by the flood, the worst known for ten years. Bridges are nearly all swept away, even the large bridge connecting Sacramento and Washington, and Wood's bridge are gone. A large band of cattle have been pasturing on the field below here known as Staples' field, but now belonging to John O'Neal of Stockton. Having eaten up all the feed they are starving to death there. It is not uncommon to see five or six lying dead near together. A hundred or more have died in this way. The high water and long cold rains have much aggravated the trouble. It is a dreadful sight to see cattle suffering and dying in this way. The owners live far away, and though they have been notified of the condition of their stock, for some season they do not regard it. (T.S.R. 55. 2 P.M. 58. S.S. 51.) Dec. 28. Saturday. In the Division this eve, officers have been elected for the next quarter. We are to have Mr. Holden for W. P. and Mr. Hyer for W. A. Father is Treasurer and Mr. Diddle R. S. As for W. D. Read, he has been a very good R. S. through the last quarter until a few evenings ago, when he took offence at the Dr. or something else, and left the Division in a great flurry without leaving his books in proper order, since which time he has not attended the meetings. Where is his true interest in the cause of temperance? This eve, W. Brooks disgraced his name and character even more than before. Having been charged with non-payment of dress in company with others, he violated his pledge openly then came into the Division and behaved very improperly. For instance, he took out a long pipe, leisurely, filled it with tobacco, and sat and smoked it in the midst of the Division room. Will he never regret such actions? (T.S.R. 46. 2 P.M. 59. S.S. 53.) Dec. 29. Sabbath. The weather today has been windy, cloudy and showery. Dr. Collins was expected to preach here today but doubtless the weather prevented, as he did not come. However, we had S. S. in the Hall as usual, though but few were there. (T.S.R. 54. 2 P.M. 64. S.S. 57.) Dec. 30. Monday. The weather has again been very windy and rainy. Now for six weeks we have had the most remarkable weather. Since the rains first commenced, there have been but very few pleasant days. From the earliest history of Cal. such a rainy season has scarcely been known. Such disasters by rain and flood have not before been equalled. It is a time of trial for miners and farmers. What will be the result, we know not. God knows, that should be sufficient for us all. (T.S.R. 54. 2 P.M. 57. S.S. 49.) Dec. 31. Tuesday. The last day of the year, and our little one's birthday. Horace is now a year old, and weighs twenty one pounds. He is now the second in size as both Howard and Ada weighed but nineteen pounds. He now has six