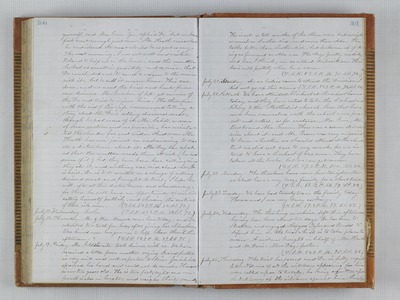 yourself", said Mrs. Gove. "Yes", replied Dr. "but we have fresh meat enough just now". Mr. Heath remarked he considered the meat would be as good as any. The next morning, I was not well and wished Roland to help me in the house, and the mutton looked so small in quantity and so nice, that Dr. concluded not to send a wagon to the mines with it, but to sell it nearer home. This was done, and we used the livers and hearts for our own dinners. Mr. Gove has, of late, got envious of the Dr. and tried to injure him. He therefore with the aid of his wife commenced telling a story about the Dr.'s selling diseased meat, though he had none of it. Mr. Cahill, a man of mean motives and no principle, has circulated the slander far and wide. And even Mr. Heath has now joined in endeavoring to create a disturbance about it. Mr. Day has reported that the mutton made them all sick, (he had some of it) but they have been here calling since they ate it, and nothing was said about it. It is said, Dr. is to be arrested on a charge of selling diseased meat and brought to trial. I hope he will, after all this disturbance and slandering, for then he will have an opportunity of vindicating himself publicly, and showing the motives of those vile men. (T.S.R. 54. 2 P.M. 88. S.S. 70.) July 17. Wednesday. Cooler. (T.S.R. 49. 2 P.M. 82. S.S. 72.) July 18. Thursday. Mr. & Mrs. Monroe came here today, and Dr. extracted two teeth for her, after giving her chloroform, Our hired men have gone over to help Geo. thresh this afternoon. (T.S.R. 50. 2 P.M. 89. S.S. 76.) July 19. Friday. Mr. Goldthwaite took dinner with us. We have received a letter from mother saying Grandfather is very sick and not expected to live. Josiah had sprained his hand and could not do much Howard is now two years old. He is two feet, eight and one-fourth inches in height, and weighs thirty pounds. He is not as tall as either of the others were but weighs as much as Luther did, and more than Ada. He talks better than Luther did, but lacks much of being as forward as Ada was. He obeys pretty readily, and has, I think, an excellent disposition. His hair curls prettily when he is warm. (T.S.R. 55. 2 P.M. 90. S.S. 74.) July 20. Saturday. As no ladies came to attend the Division, I did not go up this evening. (T.S.R. 55. 2 P.M. 94. S.S. 84.) July 21. Sabbath. We have attended S. school at the schoolhouse today, and they have voted to take the S. school and library to the Methodist church. Some that have never been connected with the school were present and voted, as for instance, Mr. Gove, Mr. Brooks and Mr. Green. There was a warm discussion about it, and Mr. Green was very anxious to know whether we should attend at the church. But we did not care to say much, for we intend to have a S. school of our own. They have taken all the books, but we can get more. (T.S.R. 57. 2 P.M. 100. S.S. 84.) July 22. Monday. The threshers have come here tonight. Now we shall have a very large family for a short time. (T.S.R. 61. 2 P.M. 97. S.S. 80.) July 23. Tuesday. We have had twenty two in the family today. Horace and I are very busy cooking. (T.S.R. 67. 2 P.M. 97. S.S. 83.) July 24. Wednesday. The threshing machine left this afternoon having been here about two days. Dr. has been to Stockton and engaged Lawyers Tyler and Budd to defend him in the trial which is to take place tomorrow. A suit was brought in behalf of Mr. Heath and Mr. Davis - Mrs. Day's father. (T.S.R. 64. 2 P.M. 96. S.S. 82.) July 25. Thursday. The trial has passed and Dr. is fully acquitted. Not one of all the witnesses appearing for him were called upon to testify, he being acquitted upon the testimony of the witnesses against him. Surely