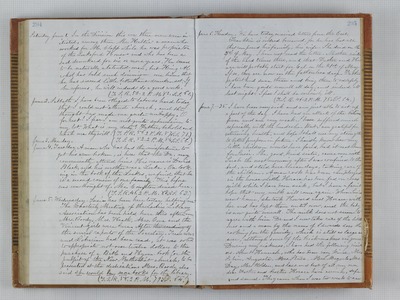 Saturday June 1. In the Division this eve three men were initiated, among them Mr. Keltie - a man who worked for Mr. Clapp while he was proprietor of the Lockeford House and who has been a sad drunkard for six or more years. He seems to be naturally a talented man, but King Alcohol has held such dominion over him, that he has seemed little better than a drunken sot. If he reforms, he will indeed do a good work. (T.S.R. 50. 2 P.M. 82. S.S. 60.) June 2. Sabbath. I have been obliged to labor so hard today that I could not attend church, and the thought has made me quite unhappy. O for rest! I fear I am not quite submissive to my lot. What is my duty ? Father, behold and teach me thy will. (T.S.R. 56. 2 P.M. 87. S.S. 71.) June 3. Monday. (T.S.R. 52. 2 P.M. 84. S.S. 66.) June 4. Tuesday. A man who has had the misfortune to get his arm broken, is here that the Dr. may conveniently attend him. His name is David Black, and his mother was a Locke. On looking in the book of the Lockes, we find that he is a second cousin of our family. This before was un-thought of. Mr. Compton dined here. (T.S.R. 46. 2 P.M. 83. S.S. 63.) June 5. Wednesday. Susie has been here today helping me. The Quarterly Meeting of the Ladies' Library Association has been held here this afternoon. Mrs. Boody, Mrs. Heath, Mrs. Gove and the Vincent girls were here. After the several reports of the Secretary, Treasurer and Librarian had been read, it was voted to appropriate not over twelve dollars to the purchase of a Bible and Hymn - book for the pulpit of the New Methodist church, to be presented at the dedication. Mrs. Boody also said she would buy more books for the library. (T.S.R. 58. 2 P.M. 79. S.S. 64.) June 6. Thursday. We have today received letters from the East. Franklin is indeed bereaved, for he has lost all that composed his family, his wife. She died on the 5th of May. I have not read the letter. Mother writes of the hard times there, and that Father and Horace will probably start for Cal. on the 21st of May. If so, they are now on the fathomless deep. Father protect and save them and bring them to us safely. I have been quite unwell all day, and indeed all last night. I fear I shall be seriously ill. (T.S.R. 46. 2 P.M. 75. S.S. 64.) June 7. 25. I have been very sick and am just able to sit up a part of the day. I have had an attack of the bilious fever and am very weak. I have suffered much especially with the headache. But I am grateful for returning health, and hope I shall use my strength to better purpose in future. I hardly know how my little children would have fared, had it not been for Susie. She, good, kind sister, came over with Sarah the next morning after I was confined to the bed, and staid here eleven days, taking care of the children. A man cook has been employed in the house. Little Horace has been fed on cows' milk while I have been sick, but I have a faint hope that my milk will come again. When Susie went home, she took Howard and Horace with her and has kept them until now, and the baby is now quite unwell. The milk does not seem to agree with him. Dr. and I now take care of the little ones and a man by the name of Edwards does the cooking for the family, which is still as large as ever, although some of the brick-makers are gone. During my sickness, I have had the following visitors. Aunt Hannah, who has been very kind, Mr. Sabin, Augusta, Mrs. Sturr, Mrs. Megerle, Mrs. Day, Mr. Holden, and last and best of all my own dear Father and brother Horace have arrived, safe and sound. They came when I was too weak to see