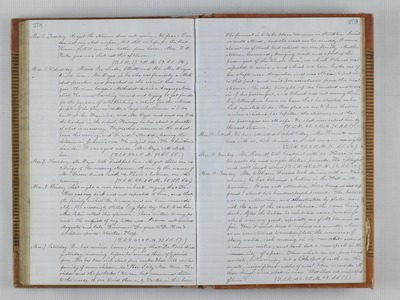 Mar. 5. Tuesday. As yet the steamer does not arrive. We fear - O we dare not say what we fear, but still we hope for the best. Heaven protect our dear brother from harm. Mrs. T. B. Parker gave me a short call this afternoon. (T.S.R. 37. 2 P.M. 69. S.S. 64.) Mar. 6. Wednesday. Messrs. Geo. Locke, Elliott and Rev. Mr. Buyer dined here. Mr. Buyer is he who was formerly a Methodist preacher and preached on the circuit here one year. He is no longer a Methodist but is a Congregationalist. He is now traveling round and trying to get funds for the purpose of establishing a school for the colored people. If the plan succeeds, a large schoolhouse is to be built at San Francisco, and Mr. Buyer and sons are to be the teachers in the school. He says he has about a fourth of what is necessary. He preached a sermon in the schoolhouse this evening, and Dr. and I attended, leaving the children in Jordena's care. The subject was- "The Christian's character." It was a good sermon. Mr. Buyer will sleep here. (T.S.R. 44. 2 P.M. 71. S.S. 66.) Mar. 7. Thursday. Mr. Buyer took breakfast here. As yet there are no tidings of the missing steamer. A man by the name of Mr. Dresser dined with us. He is a lecturer on Astronomy. (T.S.R. 42. 2 P.M. 68. S.S. 64.) Mar. 8. Friday. Last night a man came in haste, saying that Dr. Kerr was very sick and not expected to live, and that the family wished Dr. to come and see him immediately. He accordingly started long before day - break to see him. Mrs. Sabin called this afternoon. I have written to my parents. The subjects of my letter were - Steamer not arrived. Augusta and babe. Division - Dr. gone to Dr. Kerr's - Children - pieces - Weather - Help. (T.S.R. 41. 2 P.M. 73. S.S. 67.) Mar. 9. Saturday. Dr. has arrived home, saying that Dr. Kerr died yesterday morning before he arrived there, of typhoid fever. He has been sick about four weeks. What will now his family of seven children do? How I pity Mrs. Kerr. The widow and the fatherless! We can but commend them to the mercy of our kind Heavenly Father in this hour. The funeral is to take place tomorrow in Stockton. I wish we could attend, but the roads are too muddy. It seems almost as if death had entered our own family. Another steamer has arrived, bringing mails and a part of the passengers of the "Uncle Sam", on which Roland was expected to arrive, and which we learn broke one of her shafts near Acapulco, and was obliged to put into that port and wait for assistance from the next steamer. She only brought up one hundred and twenty six of her passengers, and Roland was not among them, By letters from home we learn that he started as he had expected to do. How glad we are to learn that no serious accident has befallen the steamer, and that her passengers are all safe. We shall now expect him by the next steamer. (T.S.R. 43. 2 P.M. 76. S.S. 69.) Mar. 10. Sabbath. We have attended S. school today. Mr. Harnett came home with us, took dinner, and will remain overnight. (T.S.R. 47. 2 P.M. 76. S.S. 60.) Mar. 11. Monday. Mr. Harnett took breakfast with us. Horace is now ten weeks old and weighs thirteen pounds. He is playful and will laugh aloud. (T.S.R. 45. 2 P.M. 68. S.S. 62.) Mar. 12. Tuesday. Mr. William Dresser took dinner with us. This evening he has delivered a lecture in the Hall on Astronomy. It was well attended, there being, as was supposed, about two hundred people present. The lecture was very interesting, and illustrated by plates, seen with the aid of the camera obscura, the room being dark. After the lecture, he exhibited some pamtings which were very good, especially one of Mt. Vesuvius on fire. How it must tend to expand our minds, when we are accustomed to contemplate the universe of starry worlds, each moving in its own orbit around a common centre, and each but a mere speak in the immensity of space. Then what are we, poor weak mortals, who occupy but a little spot of earth, on this small, insignificant would of ours! When we consider all these things. "Lord, what is man that those art mindful of him"? (T.S.R. 40. 2 P.M. 68. S.S. 61.)