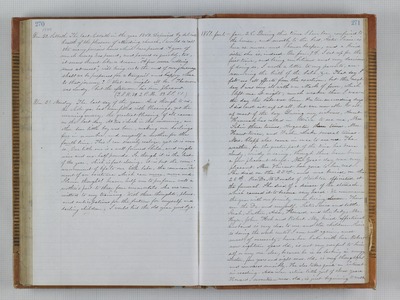 1860. Dec. 30. Sabbath. The last Sabbath in the year 1860. Deprived by delicate health of the pleasure of attending church, I would recall the many precious hours which have passed. A year of much mercy has passed, and passed so quickly, too, it seems almost like a dream. "A few more rolling suns at most", will bring us to the end of our journey, shall we be prepared for a tranquil and happy close to that journey? O that we might all be. The morn was cloudy, but the afternoon has been pleasant. (T.S.R. 31. 2 P.M. 59. S.S. 51.) Dec. 31. Monday. The last day of the year. And though to us, the whole year had been filled with blessings, yet the crowning mercy, the greatest blessing of all came on the last day. At two o'clock in the morning, another dear little boy was born, making our darlings four in number, and myself a mother for the fourth time. This I can scarcely realize, yet it is even so. Our little one is a well-formed child, and weighs nine and one-half pounds. So, though it is the last of the year, which is fast closing, it is feet the commencement of life to our little babe, the commencement of an existence which can never, never end. Solemn thought! heaven help me to perform well a mother's part to these four immortals who are committed to my training. With these thoughts, plans, and anticipations for the future for myself and darling children, I would bid the old year goodbye. 1861. Jan 1. - Jan. 26. During this time I have been confined to the house, and mostly to the bed. Sister Susie is here as nurse and house keeper, and a kind sister she is, indeed. On Jan. 9th, I sat up for the first time, and being ambitious and very desirous of doing so, I wrote a letter to my parents, announcing the birth of the babe, etc. That day I felt no ill effects from the exertion, but the next day I was very ill with an attack of fever, which left me at night, much weaker than I was on the day the babe was born. For ten succeeding days I did not sit up at all, but am now able to sit up most of the day. During my sickness, Aunt Hannah has called in twice to see me, Mrs. Sabin three times, Augusta three times, Mrs. Hurst twice, and Father Locke several times. Mrs. Clapp also came in once to see me. The weather, for the greater part of the time has been cloudy, windy or rainy, though there have been a few pleasant days. New Year's day was very pleasant. Mrs. Vincent has gone to her rest. She died on the 23rd, and was buried on the 25th. Rev. Dr. McDonald of Stockton officiated at the funeral. She died of a disease of the stomach, which caused it to become very hard. We commence the year with our family numbering eleven. There are the Dr. and myself, Sister Susie and little Sarah, Luther, Ada, Howard and the baby, Mr. Hyer, John Keh and Robert. My kind, affectionate husband is very dear to me and the children. Susie is doing the work until I am well again, and must, of necessity, have her babe with her. Robert now eighteen years old, is not very useful to himself or any one else, because he is so lacking in energy. Luther, four years and eight mos. old, is very thoughtful and converses sensibly. He also takes quite an interest in reading. Ada is an active little girl of three years. Howard, seventeen mos. old, is just beginning to walk.