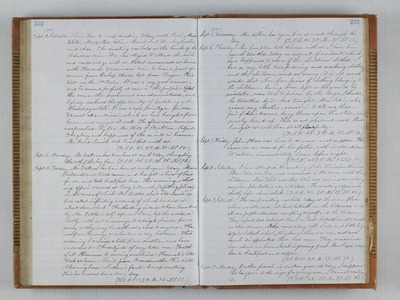 1860. Sept. 2. Sabbath. I have been to camp meeting today with Paul, Miss White, Mr. & Mrs. Sabin, Aunt and Uncle, Luther and Ada. The meeting was held on the bank of the Calaveras river. Dr. was obliged to attend the sick and could not go with us. Robert remained at home with Howard. We arrived in time to hear a part of a sermon from Bishop Ames, late from Oregon. His text was the 1st Psalm. It was a very good sermon, and he seemed perfectly at ease in the pulpit. After the sermon the sacrament was administered, and I gladly embraced the opportunity of partaking of the blessed symbols. It was a rare privilege for me. We next ate our dinner, which we had brought from home, and enjoyed it well. The afternoon sermon was preached by Rev. Mr. Hill of Stockton. Subject. The glory and happiness of the saints in heaven. Mr. David Smith took breakfast with us. (T.S.R. 48. 2 P.M. 80. S.S. 68.) Sept. 3. Monday. Mr. Wallace has been here at work today shingling the roof of the hay barn. (T.S.R. 46. 2 P.M. 86. S.S. 73.) Sept. 4. Tuesday. Mr. Wallace has been here at work again today. Messrs. Caldwell and Wells came and brought a hive of bees for us, and took breakfast here. This morning, a shooting affair occurred at Terry's Ranch, (a fitting place) in the course of which Mr. Battles shot "old Lorwis," as he is called, inflicting a wound of which he died at about eleven o'clock. The shooting is said to have been done by Mr. Battles in self defence. Lewis left the world silently, with not a message to a single friend, few or many as they may be, with not a word to anyone. He was from Germany, and has been a very bad man. This morning I received a letter from mother, and have answered it. The subjects of my letter were - Health of all - Hemmer to sewing machine - Hannah's letter - work at home - Fruit - pears - Grandmother H.'s sister - Cleaning house - Luther's pants - Camp-meeting. This has indeed been a busy day. (T.S.R. 50. 2 P.M. 83. S.S. 68.) 1860. Sept. 5. Wednesday. Mr. Wallace has again been at work through the day. (T.S.R. 46. 2 P.M. 81. S.S. 71.) Sept. 6. Thursday. Mr. Compton took dinner with us. I have been much troubled today on account of accidents which have happened to some of the children' clothes. I have so very little time for sewing and making clothes, and the children need so many, it is not much wonder that when four pieces of clothing belonging to the children, having been left on the ground by mistake, were torn to pieces by the hogs, I should be troubled by it. And tonight, Mrs. Sabin, who irons my clothes, comes in to tell me that a pair of Ada's drawers, being blown upon the stove, are nearly burnt up. This is not pleasant news. But I might as well bear it all cheerfully. (T.S.R. 48. 2 P.M. 82. S.S. 74.) Sept. 7. Friday. John Kerr was here to dinner and supper. He came on an errand for his father with instructions to return immediately home before night. (T.S.R. 48. 2 P.M. 85. S.S. 74.) Sept. 8. Saturday. I have attended the meeting of the Division this eve. Geo. Lepee was here, and remained in the house with the children. Miss White and Mrs. Sabin were received as visiting members. John Robbins was initiated. The meeting adjourned shortly before eleven o'clock. (T.S.R. 45. 2 P.M. 89. S.S. 80.) Sept. 9. Sabbath. The camp meeting was held today at the same place where we attended it last Sabbath, on the Calaveras, and all our people attended excepting myself and the children. They report less interest than on last Sabbath, and a smaller attendance. Father came along, with Susie and little baby to go to Sabbath school, thinking there was one, and were much disappointed there was none. They remained here about an hour. Sarah is growing fast. Geo. Lepee was here to breakfast and supper. (T.S.R. 48. 2 P.M. 89. S.S. 75.) Sept. 10. Monday. Brother Josiah is sixteen years old today. I suppose he has grown to the size of a young man. I cannot realize it. (T.S.R. 48. 2 P.M. 89. S.S. 75.)