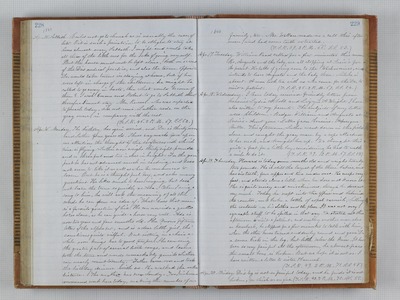 1860. Apr. 15. Sabbath. Could not go to church as is usually the case, of late. O it is such a privation to be obliged to stay at home almost every Sabbath. I might and would take all three of the little ones for the sake of going myself. But the house must not be left alone, both on account of the Dr.’s medical practice, and also the tavern opposite. Dr. would take turns in staying at home, but if he were left in charge of the children, he might be called to go away in haste, then what would become of them? I wish Emma and Robert to go to Sabbath school, therefore I must stay. Mr. Russel who was expected to preach today, did not come. Luther rode on the gray mare, in company with the rest. (T.S.R. 46. 2 P.M. 67. S.S. 62.) Apr. 16. Monday. The birthday has again arrived, and Dr. is thirty seven and Luther four years old. These way marks force upon our attention the thought of the swiftness with which time is flying. Luther now weighs thirty eight pounds and is three feet and two inches in height. For the year past he has not advanced much in reading, and does not seem to like it as well as when he commenced to learn. But he is a thoughtful boy, and asks many questions. He likes much to hear singing, but does not learn the tune so quickly as Ada. When I sing a song to him, he will ask the meaning of all the words he can form no idea of. "What does that mean," is a favorite question of his. He can now ride a gentle horse alone, as he can guide a horse very well. Ada is now two years and four months old. She knows fifteen letters of the alphabet, and is a dear little girl, tho' sometimes quite wilful. But sitting in a chair awhile soon brings her to good temper. She can sing the greater part of several little songs, and learns both the tune and words remarkably quick Luther can nearly count twenty. Father came over and took the birthday dinner with us. He walked the entire distance. The weather has been cloudy. Two Irishmen commenced work here today, making the number of our 1860. family, ten. Mr. Wallace made us a call this afternoon, and had some teeth extracted. (T.S.R. 39. 2 P.M. 66. S.S. 53.) Apr. 17. Tuesday. William Read called for a few minutes this morn. He, Augusta and the baby, are all stopping at Susie's for the present. He talks of going soon to the Washoe mines, and intends to leave Augusta and the baby there while he is absent. A man took tea with us who come for the Dr. to visit a patient. (T.S.R. 45. 2 P.M. 67. S.S. 54.) Apr. 18. Wednesday. I have today received friendly letters from Cousins Lydia A. Cobb and Lizzie A Wright. I have also written to my parents. The subjects of my letter were - Children - Badger - William and Augusta at Susie's - Aunt gone - Letter from Cousins - Asparagus - Butter. This afternoon, Luther went down in the field alone and caught the gray mare by a rope attached to her neck, and brought her up. We thought this quite a feat for a little boy, considering he had to walk a mile to do it. (T.S.R. 39. 2 P.M. 67. S.S. 58.) Apr. 19. Thursday. Howard is today nine months old and weighs twenty two pounds. He is still the largest of the three babies, and has six teeth, four upper and two under ones. He creeps very fast, and stands alone a little when he does not know it. He is quite noisy and mischievous, though he does not cry much. Today he crept into the office and behind the counter, and broke a bottle of copal varnish, spilling the contents over his clothes and the floor. It was not very agreeable stuff to be spilled in that way. Dr. started out this afternoon to visit a patient, and meeting another man also on horseback, he stopped for a few minutes to talk with him, when the other horse turned suddenly round and gave Dr. a severe kick in the leg, but little below the knee. It has been so very painful all the afternoon, he almost fears the small bone is broken. But we hope it is not so. I have written a letter to sister Hannah. (T.S.R. 49. 2 P.M. 71. S.S. 58.) Apr. 20. Friday. Dr.'s leg is not so painful today, and he finds it is not broken, for which we are glad. (T.S.R. 42. 2 P.M. 70. S.S. 55.)