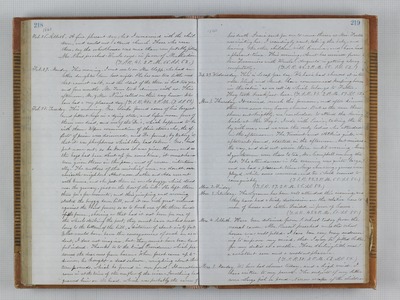 1860. Feb. 26. Sabbath. A fine, pleasant day, but I remained with the children, and could not attend church. Those who were there, say the schoolhouse was more than comfortably filled, Mr. Nims preached - Uncle says - in favor of Methodism. (T.S.R. 41. 2 P.M. 65. S.S. 62.) Feb. 27. Monday. This morning, I went over to see Mrs. Clapp, who had another daughter born last night. She has now two little ones that cannot walk, and the oldest of the three is but two yrs, and four months. Mr. Tam took dinner with us. This afternoon, Mr. & Mrs. Nims called on their way home. We have had a very pleasant day. (T.S.R. 40. 2 P.M. 67. S.S. 61.) Feb. 28. Tuesday. This morning, Geo. Locke found some of his largest and fattest hogs in a dying state, and before noon four of them were dead, and one of the Dr.'s, which happened to be with them. Upon examination of their stomachs, the effects of poison were discovered, and Dr. found, by testing it, that it was phosphorus which they had taken. Geo. had put none out, so he knows it was given them, and as the hogs had been shut up for sometime, it must have been given them in the pen, and of course, intentionally. The authors of the mischief were, no doubt, our amicable neighbors. About noon, Luther and Ada were out with Emma, and she put them in an old buggy, which stood near the granary, just on the brow of the hill. She left them thus for a few moments, and their jumping and moving started the buggy down hill, and it ran with great violence against the board fence, so as to break one of the three boards of the fence, showing us that had it not been for one of the wheels striking the post, they must have rushed headlong to the bottom of the hill, a distance of about sixty fat. What would have been the consequences of such an accident, I dare not imagine, but they must have been dreadful indeed. Thanks be to the kind Providence which preserved the dear ones from harm. When Jacob came up to dinner, he brought a dead salmon, weighing about thirteen pounds, which he found in our pond. It must have come in at the time of the overflow of the river. Something had gnawed him on the head, which was probably the cause of 1860. his death. Susie sent for me to come there, as Mrs. Foster was visiting her. I accordingly went, taking the baby, and leaving the other children with Emma, and have had a pleasant time. This evening, Aunt has arrived from San Francisco with Uncle. Augusta is getting along comfortably. (T.S.R. 42. 2 P.M. 68. S.S. 62.) Feb. 29. Wednesday. This is Leap - year day. We have had showers at intervals. Uncle and Aunt have commenced keeping house in the "cabin" as we call it, which belongs to Father. They took breakfast here. (T.S.R. 51. 2 P.M. 59. S.S. 53.) Mar. 1. Thursday. It rained much this forenoon, and after dinner there were some very heavy showers. But as the sun then shone out brightly, we concluded to attend the Sewing Circle at Mr. Day's. I rode with Susie, taking the baby with me, and we were the only ladies who attended in the afternoon. The Vincent and Atkins girls, we afterward found, started in the afternoon, but missed the way, and did not arrive there until evening. Several gentlemen were there to tea, Mr. Campbell among the rest. The attendance in the evening was quite large, and we had a pleasant time. Songs were sung, games were played, while some conversed, and ten o'clock seemed to come quickly. (T.S.R. 52. 2 P.M. 55. S.S. 50.) Mar. 2. Friday. (T.S.R. 37. 2 P.M. 56. S.S. 52.) Mar. 3. Saturday. The Lyceum has been well attended this evening, and they have had a lively discussion an the relative uses to man of horses and cattle. Decided in favor of horses. (T.S.R. 45. 2 P.M. 61. S.S. 55.) Mar. 4. Sabbath. Have been detained from S. school today from the usual cause. Mr. Russel preached and the schoolhouse was well filled. I have been very busy endeavoring to improve my mind, that I may be fitted better for my duties as a mother. Those darling little ones! a constant care and a constant pleasure. (T.S.R. 38. 2 P.M. 62. S.S. 55.) Mar. 5. Monday. We have had showers today, and a high wind. I have written to my parents. The subjects of my letter were - Large fish in pond - Narrow escape of the children