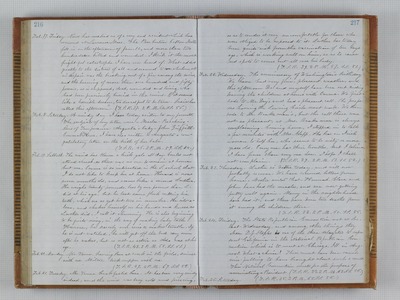 Feb. 17. Friday. News has reached us of a very sad accident which has occurred at Laurence, Mass. The Pemberton Colton Mills fell in on the afternoon of Jan. 10, and more than two hundred were killed and wounded. I think it the most frightful catastrophe I have ever heard of. What added greatly to the distress of all and seemed to over whelm all in despair was the breaking out of a fire among the ruins, and the burning of more than one hundred and fifty persons, as is supposed, dead, wounded and living, who had been previously buried in the ruins. O it seems like a horrible dream, too dreadful to be true. Susie has called this afternoon. (T.S.R. 37. 2 P.M. 61. S.S. 56.) Feb. 18. Saturday. A windy day. I have today written to my parents. The subject of my letter were - Measles - Preaching - Sons of Temperance. Augusta's baby - John Griffith - Emma C. Kerr. I have also written to Augusta a congratulatory letter are the birth of her babe. (T.S.R. 46. 2 P.M. 59. S.S. 54.) Feb. 19. Sabbath. The wind has blown a brisk gale all day. Could not attend church, as there was no one to remain at home but me. Emma is so interested in the S. school that I do not like to keep her at home. Howard is now seven months old, and seems like a second Luther. He weighs twenty pounds, less by one pound than L. did at his age, but he lost some flesh cutting his teeth, which are as yet but two in number. He sits alone, and shakes himself on his hands and knees as Luther did. I call it churning. He is also beginning to be quite noisy, in the way of making baby talk. However, he scarcely ever cries or makes trouble. If he is not watched, he will get off the bed very soon after he wakes, but is not as active as Ada was at his age. (T.S.R. 43. 2 P.M. 65. S.S. 61.) Feb. 20. Monday. Mr. Vance, having been at work in the field, dined with us. Milton took supper with us. (T.S.R. 49. 2 P.M. 67. S.S. 58.) Feb. 21. Tuesday. Mr. Vance breakfasted here. It has been very windy indeed, and the wind was very cold and piercing, so as to render it very uncomfortable for those who were obliged to be exposed to it. Luther has today been quite sick from the vaccination of ten days ago, which is working well on him, so as to cause red spots to come out all over his body. (T.S.R. 39. 2 P.M. 57. S.S. 51.) Feb. 22. Wednesday. The anniversary of Washington's birthday. We have had very fine, pleasant weather, and this afternoon Dr. and myself have been out riding leaving the children at home with Emma. We first rode to Mr. Day's and had a pleasant call. She proposes having the Sewing Circle next week. We then rode to Mr. Brake man's, but the call there was not so pleasant, as Mrs. Brake man is always complaining, Coming home, I stopped in to talk a few minutes with Mrs. Clapp. She has an Irish woman to help her, who seems to be sixty or more years old. Every one has their troubles, but I believe I have fewer than any one else. I lope I shall not complain. (T.S.R. 39. 2 P.M. 61. S.S. 52.) Feb. 23. Thursday. Luther is better today, and will now probably recover. We have received letters from home. Mother writes that Hannah, Clara and John have had the measles, and are now getting pretty well again. Many in the neighborhood have had it, and there have been two deaths from it among the children there. (T.S.R. 32. 2 P.M. 60. S.S. 55.) Feb. 24. Friday. The State Republican Convention met at Sac. last Wednesday, and among other things they chose D. J. Staples as one of the three delegates to represent California in the National Republican Convention which is to meet at Chicago, Ill. in Aug. next. What a choice! There must have been much wire - pulling to have brought about such a result. This National Convention meets for the purpose of nominating a President. (T.S.R. 33. 2 P.M. 62. S.S. 56.) Feb. 25. Saturday. (T.S.R. 35. 2 P.M. 65. S.S. 56.)