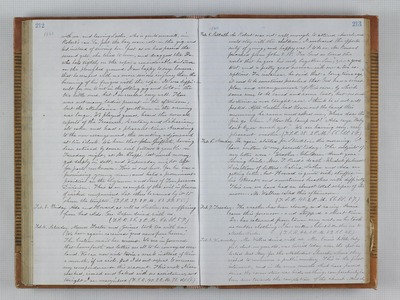 1860. with me, and leaving Luther, who is quite unwell, in Robert's care. Dr. put the bay mare colt in the gig, and led, instead driving her, Just as we had passed the second gate, she tired to run, and dragged the Dr. who held tightly on the rope, a considerable distance on the ploughed ground. I am happy to say, however, that he escaped with no more serious injury than the burning of his fingers with the rope. It was difficult for me to sit in the jolting gig and hold in the two little ones, but I succeeded very well. There were not many ladies present in the afternoon, but the attendance of gentlemen in the evening was large. We played games, heard the several reports of the Treasurer, Secretary and Librarian, ate cake, and had a pleasant time. According to the new arrangement, the meeting adjourned at ten o'clock. We learn that John Griffith, having been entired by some evil fellows to gamble in Tuesday night, at Mr. Clapp's, lost much money, got deeply in debt, and Wednesday night left for parts unknown. This is sad news, for he was a promising young man, and held a prominent position in the Lyceum and Sons of Temperance Division. This is an example of the evil influence of wicked companions. Let others be warned by it to "shun the tempter." (T.S.R. 39. 2 P.M. 61. S.S. 55.) Feb. 3. Friday. Ada and Howard, as well as Luther, are suffering from bad colds. Geo. Lepee dined with us. (T.S.R. 36. 2 P.M. 60. S.S. 59.) Feb. 4. Saturday. Messrs. Foster and Givens took tea with us. We have again received "good news from home." The Eastern mail has arrived. We are in formed that hence forth our letters are all to be conveyed overland. We can now write twice instead of twice a month, if we wish. But I do not expect to increase my correspondence on this account. This week I have washed, ironed and baked with no assistance, and tonight I am weary indeed. (T.S.R. 40. 2 P.M. 71. S.S. 61.) 1860. Feb. 5. Sabbath. As Robert was not well enough to attend church, and could stay with the children, I embraced the opportunity of going, and happy was I to do so. Mr. Russel preached from John 3. 16. For God so loved the world that he gave his only begotten Son," etc. - a good text, and a pretty good sermon with one or two exceptions. For instance, he said that a long time ago, it used to be sometimes preached that God had a secret plan and arrangements of His own, by which some were to be saved and some lost, but no such doctrine is ever taught now. I think he is not well posted. After Luther had blown out the lamp this morning he came and asked me," Where does the fire go when I blow the lamp out?" Ada says, "Baby don't know much yet." We are having very, very pleasant weather. (T.S.R. 38. 2 P.M. 66. S.S. 58.) Feb. 6. Monday. Dr. again started for Stockton this morning. I have written to my parents today. The subjects of my letter were - Weather - Children - Aunt gone - Sewing Circle - Mrs. T. Reed's death – Undutifulness. Direction of letters - Calico. Luther and Ada are getting better, but Howard is quite sick, stuffed in his throat, and sometimes breathes with difficulty. This eve we have had an almost total eclipse of the moon. Mr. Wallace called this afternoon. (T.S.R. 40. 2 P.M. 66. S.S. 57.) Feb. 7. Tuesday. The weather has been cloudy and rainy. Susie came this forenoon, and stopped a short time. Dr. has returned from town very wet, as he took us rubber clothing. I have written a short letter this eve to Mother Locke. (T.S.R. 44. 2 P.M. 59. S.S. 48.) Feb. 8. Wednesday. Mr. Wallace dined with us. Mr. Ennis little baby girl, about one year old, was buried today near the shot selected last May for the Methodist church, where they wished to commence a public cemetery. This is the first interment, and in the nine months which have passed since the corner stone was laid, nothing, comparatively has been done towards the completion of the church. And why