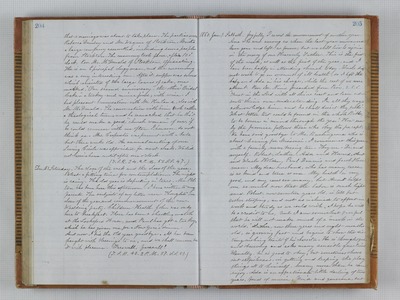 that a marriage was about to take place. The parties were Rebecca Demsey and Mr. Wagner of Stockton. Quite a large company assembled, including some people from Stockton. The ceremony took place after 10 o'clock, Rev. Mr. McDonald of Stockton, officiating. He is an Episcopal clergy man, and the ceremony was a very interesting one. After it, supper was served, which consisted of two large loaves of cake, one marked," Our second anniversary," the other" Bridal Cake." a turkey - and mince pies, with wine. I had pleasant conversation with Mr. Howland, also with Mr. McDonald. The conversation with him took rather a theological turn, and he remarked that he tho't he could make a good "church woman" of me, if he could converse with me often. I, however, do not think so. - Mrs. Carpenter was present with a babe but three weeks old. An annual meeting of our Sewing Circle was appointed for next week. We did not arrive home until after one o'clock. (T.S.R. 34. 2 P.M. 50. S.S. 47.) Dec. 31. Saturday. The close of the week and the close of the year. What a fitting time for contemplation. The night is rainy. The old year is departing in tears. Mrs. Pelton has been here this afternoon. I have written to my parents. The subjects of my letter were Thoughts on close of the year, and commencement of the new Wedding party - Children - Health. John was only here to breakfast. There has been a shooting match at the Lockeford House, and Paul has got a turkey, which he has given me for a New Year's dinner. And now I bid the old year goodbye. It has been fraught with blessings to us, and we shall remember it with pleasure. Farewell, farewell! (T.S.R. 40. 2 P.M. 57. S.S. 51.) 1860. Jan. 1. Sabbath. Joyfully I record the commencement of another year. Some who were among us when the last year commenced have gone and left us forever, but we still live to rejoice in the merry of our Heavenly Father. This is the first of the week, as well as the first of the year, and I have been happy in attending church today. Uncle did not wish to go on account of ill health, so I left the baby and Ada in his charge, while the rest of us were absent. Rev. Mr. Nims preached from Prov. 3. 5. 6. "Trust in the Lord with all thine heart and lean notunto thine own, understanding. In all thy waysacknowledge him, and he shall direct thy paths." What better text could be found in the whole Bible, to be borne in mind through the year? How surely the promise follows those who obey the precept. We have said goodbye to Mr. Burlingame who is about leaving for Missouri. I commence this year with a family numbering ten. They are - Dr. and myself - Robert, Luther, Ada and Howard, Aunt and Uncle Holden, Paul Dennis and Jacob Herrman. My dear husband, who has many cares, is as kind and true as ever. My health is very good and my cares are many, but Aunt helps me so much now that the labor is much lightened. Robert, now seventeen years old, is tall but rather stooping, and not so inclined to effort in work and study as we could wish, I hope he will be a credit to us, but I am somewhat fearful that he will not make much of a "mark in the world." Luther, now three years and eight months old, is growing fast and begins to show the distinguishing traits of his character. He is thoughtful and observing and asks many sensible questions. Usually, he is good to obey, but sometimes shows out selfishness, in getting and keeping the play things all to himself, many more than he can enjoy. Ada is an affectionate little darling of two years, fond of music, kind and generous, but