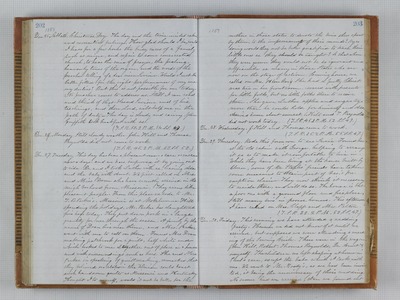 1859. Dec. 25. Sabbath. Christmas Day. The day and the time incites calm and reverential feelings. How glad should I be, could I have for a few hours the busy cares of a family Such as mine, and repair to some consecrated church, to hear the voice of prayer, the pealing, heavenly tones of the organ, and the words of the preacher telling of a dear risen Savior. Would I not be better fitted for the right performance of my many duties? But this is not possible for me today. No preacher comes to address us. Still I can read and think of that blessed Saviour and of his teachings, and then, Lord, will help me in the path of duty. The day is cloudy and rainy. John Griffith took breakfast with us. (T.S.R. 50. 2 P.M. 54. S.S. 47.) Dec. 26. Monday. Still cloudy weather. John Hill and Thomas Reynolds did not come to work. (T.S.R. 45. 2 P.M. 53. S.S. 52.) Dec. 27. Tuesday. This day has been a pleasant one - a rare occurrence now-a-days - and we have improved it by going out to ride. Dr. and I took Luther with us, leaving Ada and the baby with Aunt. We first called on Mrs. and Miss Doom who have recently arrived in the neighborhood from Missouri. They seem like pleasant people. From this place we rode to Mr. T. B. Parker's. Missouri is at Mokelumne Hill spending the holidays. Mr. Parker has slaughtered five hogs today. They put down pork in a large quantity for use through the season. A family by the name of Doan live near them, and Mrs. Parker went with me to call on them. Found Mrs. Doan making patchwork for a quilt, half white and which looked to me altogether out of place in a house and with surroundings such as hers. She and Mrs. Parker in speaking of quilt making, remarked that they believed no states in the Union could boast such handsome quilts as Missouri and Kentucky. Thought I to myself, would it not be better for the 1859. mothers in those states to devote the time thus spent by them, to the improvement of their minds? By so doing would they not be better qualified to teach their little ones as they should be taught? So that when they were grown they would not be so ignorant and ruffian like as many in those States who are now on the stage of action. Coming house, we called on Mrs. Klonker. She had a pretty Christmas tree in her front room, covered with presents for little folks, but no little folks there to receive them. She gave Luther apples and sugar toys more than he could hold for himself and Ada. Arrived home about sunset. Hill and T. Reynolds did not work today. (T.S.R. 45. 2 P.M. 52. S.S. 49.) Dec. 28. Wednesday. J. Hill and Thomas came to work. (T.S.R. 35. 2 P.M. 55. S.S. 47.) Dec. 29. Thursday. Rode this forenoon to see Susie. Found her at the old cabin with George, helping to arrange it so as to make it comfortable to live in. While they have been living at the house built by Elmer, some of Mr. Staples' friends have taken some measures to obtain part of Geo.'s pre-emption claim. They now thinks it necessary to reside there, and will do so. The house is but a poor one with a ground floor and fire place. Still many live in poorer houses. This afternoon I have called on Mrs. Clapp and Mrs. Pelton. (T.S.R. 32. 2 P.M. 52. S.S. 47.) Dec. 30. Friday. This evening we have attended a wedding party. However we did not know of at until we arrived, but supposed we were attending a meeting of the Sewing Circle. There were in the wagon. John Hill, Robert, Thomas Reynolds, Dr. Aunt & myself. The children we left sleeping at home in Paul's care, except the babe which I took with me. We went to Mr. Boody's, as we had been invited, it being the anniversary of their wedding. No sooner had we arrived, than we found out