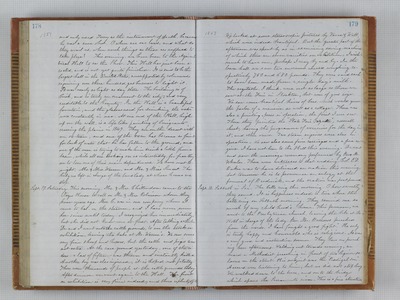 1859. and only used Terry as the instrument of death, because he was a sure shot. O where are our laws, and what do they avail us, when such things as these are suffered to take place? This evening, we have been to the Agricultural Hall to see the Show. This Hall has just been erected, and is not yet quiet finished. It is said to be the largest hall in the United Plates, unsupported by columns, requiring over three-hundred gas burners to light it. It was nearly as light as day there. The building is of brick, and is truly an ornament to the city, and very creditable to the County. In the Hall is a beautiful fountain, and the glasses used for drinking the water were constantly in use. At one end of the Hall, high up on the wall, is a life like painting of Emigrants crossing the plains in 1849. They are on the desert with an 04 team, and one of the oxen has become so faint for lack of water that he has fallen to the ground, and one of the men is trying to make him drink a little from a basin, while all are looking on so interestedly, for fear they are to lose one of their main dependences. We have met tonight, Mr. & Mrs. Warren, and Mr. & Miss Smart. The baby we left in charge of the land lady at whose house we stop. Sept. 17. Saturday. This morning, Mr. & Mrs. Chittendon came to the Noyes House to call on Mr. & Mrs. Robinson whom they knew years ago. Mrs. C. was in our company when I came to Cal. on the steamer, and I have never seen her since until today. I recognized her immediately, but she did not know me at first. After talking a while, Dr. and I went out to the cattle grounds, to see the stock or exhibition, leaving the babe at Mr. Warren's. We saw some very fine sheep and horses, but the cattle and pigs were not extra. At the race-ground yesterday, one of the riders - a lad of fifteen - was thrown and instantly killed. Another boy was also injured, it is hoped not fatally. There were thousands of people a the cattle grounds today. After dinner, we went again to the Hall. The first on exhibition is very fine indeed, and there is plenty of it. 1859. We looked at some stereoscopic pictures by Vance & Webb, which were indeed beautiful. But the greater part of the afternoon was spent by us in examining sewing - machines of which there are seven varieties on exhibition. I wish much to have one, perhaps I may by and by. In the lower hall we saw two enormous cheeses weighing respectively 750 and 680 pounds. They were said each to have been made from a single day's milk. The vegetable, I think, were not as large as those we saw at the Fair in Stockton, but were of good size. We saw some beautiful hirer of bees, which would grace the parlor of a mansion as well as a cottage. There was also a printing - press in operation, the first I ever saw. There they printed the "State Fair Gazette", as small sheet, having the programme of exercises for the day in it, and other news. Two steam engines were also in operation. We saw also some fine carriages and a fire engine. I have not been to the Hall this evening. Dr. went and saw the marriage ceremony performed by Rev. Mr. Wheeler. There were witnesses to that wedding. Col. E. D. Baker was to have delivered an oration this evening, but tomorrow he is to pronounce an eulogy at the funeral of Broderick, and the oration was postponed. Sept. 18. Sabbath in Sac. The bells sing this morning. O how sweetly they sound. It is happiness indeed to live where the bells sing on Sabbath morning. They remind me so much of my child hood's home. This forenoon, we went to the Presbyterian church, leaving the babe at the Hotel in charge of the lady. Rev. Mr. Burrows preached from the words, "I have fought a good fight." He only is truly happy and honorable who is religious. It was a very good and instructive sermon. They have no preaching here afternoons. Walking out towards evening, we heard a Methodist preaching in front of two liquor saloons on the street. His subject was the "Prodigal son." A crowd were listening to him, but we did not stop long. We walked down to the levee, and on to the bridge which spans the Sacraments river. This is a fine structure.