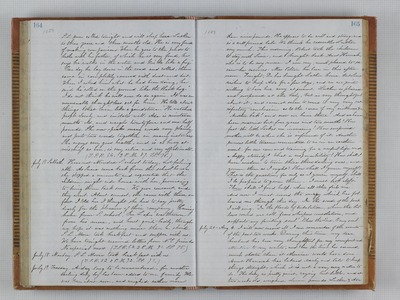 1859. S. L. Moore called tonight and will sleep here. Luther is three years and three months old. He is very fond of making comparisons. When he goes to the pond to bathe with his father, of which he is very fond, he says he "walks in the water and kicks like a frog." One day he lay down in the road and rolled, them came in completely covered with dust and dirt. When I asked him what he had been doing, he said he "rolled on the ground like the black hog." I do not think he will ever do so again. It was an unusually thoughtless act for him. He tells about things that "turn like a grindstone." He watches people closely, and imitates well. Ada is nineteen months old, and weighs twenty four and one-half pounds. She now speaks many words very plainly, and puts two words together in many instances. She enjoys very good health, and is as busy at mischief as ever, is very active and very affectionate. (T.S.R. 54. 2 P.M. 89. S.S. 76.) July 17. Sabbath. Have not attended S. school today, not feeling able. As Susie came back from the schoolhouse she stopped a minute and requested that the children might ride home with her, promising to bring them back soon. We gave consent, and they went. About sunset, she came with them on foot. I told her I thought she had to pay pretty dearly for the pleasure of their company. Coming home from S. school, Geo. Lepee was thrown from his mare, and hurt quite badly, though we hope it was nothing more than a shock. S. L. Moore took breakfast and supper with us. We have tonight received letters from N. E. friends. No especial news. (T.S.R. 54. 2 P.M. 91. S.S. 75.) July 18. Monday. S. L. Moore took breakfast with us. (T.S.R. 53. 2 P.M. 92. S.S. 77.) July 19. Tuesday. A day long to be remembered, for another darling baby boy has been added to our family. He was born about noon, and weighed rather more 1859. than nine pounds. He appears to be well and strong, and is a well formed babe. We think he resembles Luther very much. This morning, Robert took the children to stay with Susie, and brought back Aunt Hannah, who is to be my nurse. I am very, much pleased to secure her services. Mrs. Pelton has been in this afternoon. Tonight, Dr. has brought Luther home, but Susie wishes to keep Ada for a few days, and we are quite willing to have her away at present. Luther is pleased and surprised at the baby, but is very thoughtful about it, and cannot seem to come to any very satisfactory conclusion as to the cause of my sickness, etc. Another babe! and now we have three. And we have been married but four years and two months! How fast the little Lockes are increasing! How surprised mother will be when she is informed of it. Another precious little treasure committed to us in an earthen vessel, for our care and training for a useful life and a happy eternity! What a responsibility! How shall I have wisdom to train these three darling ones, and govern them as I ought? How shall I govern myself? That is the question, for only as I govern myself, shall I be prepared to govern them. I must "look aloft". There shall I find help, when all other fails me. And now I must record the mercy which has followed me through this day. In the words of the pock I will sing, "In the floods of tribulation, when the billows round me roll," Jesus whispers consolation, and supports my fainting soul." "Bless the Lord, O my soul." July 20 - Aug. 4. I will now record all I can remember of the events of the past two weeks. During this time, my dear husband has been very thoughtful for my comfort and attentive to my wants, and thus the time has seemed much shorter than it otherwise would have done. Aunt Hannah has labored early and late to keep things straight, which it is not a very easy on alter to do. The baby is pretty quiet, crying but little, and at two weeks old weighed eleven pounds. Luther & Ada