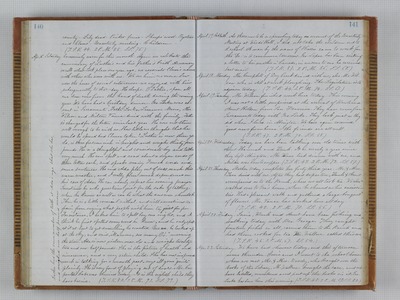 county - Lily dead - Picket fence – Sheep’s wool - Oysters and Clams - Quarterly meeting - Children. (T.S.R. 44. 2 P.M. 85. S.S. 76.) Apr. 16. Saturday. Excessively warm for this month. Again we celebrate the anniversary of Luther's and his father's birth. As memory recalls what took place one year ago, we associate Elmer's name with others who were with us. We see him no more - Few were the hours of social inter course we enjoyed with him subsequently to that day. He sleeps. O Father, spare all our dear ones from the hand of death during the coming year. We have had a birthday dinner. Geo. Locke was absent in Sacramento. Father Locke Laurence Moore, Mr. Wilson and Milton Vance dined with the family. Father is changed for the better since last year. He was not then well enough to be with us. How little we thought that he would be spared and Elmer taken! Luther is now three yeas old, is three feet-one inch in height and weighs thirty four pounds. He is a thoughtful and considerate boy and talks very much. He can spell and read about a doyen words of three letters each, and speaks many French words and some sentences. He and Ada play out of doors much this warm weather, and I really place much dependence on his care of Ada. He can nearly repeat his evening prayer Sometimes he asks questions just for the sake of talking, when he knows as well as can be what the answer should be. Then he is little comical withal, and will sometimes refrain from saying what people wish him to, just for fun. For instance, I asked him to spell boy one night, and I think he first spelled every word he knew, and he only spelled it at last to get something he wanted. One eve. he looked up at the sky, and said, "Mamma, see many O's." meaning the stars. Ada is now sixteen mos. old and weighs twenty two and one-half pounds. She is the picture of health and innocence, and a very active child. She has not improved much in talking for a month past - says "all gone" quite plainly. She is very fond of playing out of doors. Mr. Carpenter’s babe was buried today. It is the eighth child they have buried. (T.S.R. 50. 2 P.M. 91. S.S. 79.) Luther had the same number of teeth at Ada's age that she has, and weighed one-half pound more. April 17. Sabbath. As there was to be no preaching today on account of the Quarterly Meeting at Words' Hall, I did not take the children out to S. school. A man by the name of Harris came to work for the Dr. is to commence tomorrow. Geo. Lepee has been writing a letter to his mother in Canada, in answer to one he received last mail. (T.S.R. 51. 2 P.M. 86. S.S. 68.) April 18. Monday. Mr. Campbell of Dry Creek dined with us, also Mr. Wilson who is still at work ploughing. The Legislature is to adjourn today. (T.S.R. 44. 2 P.M. 74. S.S. 61.) April 19. Tuesday. Mr. Wilson finished work here today. This evening I was not a little surprised at the arrival of Uncle and Aunt Holden from San Francisco. They have come from Sacramento today with Geo. Locke. They look just as they did when I lived in Abington. We have again received "good news from home" the friends are all well. (T.S.R. 47. 2 P.M. 70. S.S. 58.) April 20. Wednesday. Today we have been talking over old times with Aunt Hannah and Uncle. It is nearly a year since they left Abington. Mr. Vance took dinner with us, and Milton was here to supper. (T.S.R. 43. 2 P.M. 72. S.S. 57.) April 21. Thursday. Mother today completes her forty third year. Mr. & Mrs. Tam dined with us. After they had departed, Uncle & Aunt accompanied us to the Ranch, where we all took tea. We also walked over to Geo.'s house, where he showed us his curiosities. Had a pleasant walk and gathered a large bouquet of flowers. Mr. Vance has worked here all day. (T.S.R. 42. 2 P.M. 70. S.S. 56.) April 22. Friday. Susie, Uncle and Aunt have been fishing and walking today with Bro. George. They caught fourteen fishes in all, carried them to the Ranch and had them cooked for tea. Mr. Wallace called this eve. (T.S.R. 45. 2 P.M. 67. S.S. 54.) Apr. 23. Saturday. We have had showers today, and this afternoon some thunder. Susie and I went to the schoolhouse where we met Mr. & Mrs. Boody, who brought over the books of the Library. Mr. Wallace brought the case, and we have labelled, numbered and put up the books in it. Geo. Locke has been here this evening. (T.S.R. 45. 2 P.M. 59. S.S. 50.)