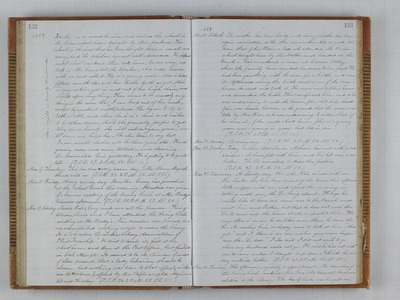 1859. After this, we re-crossed the river, and visited the school in the Salem school house taught by Mrs. Jenkins. The school is the first that has been taught there, is small and noisy, and the scholars are not well advanced. We stopped until school was done, then rode home, On our way, we took in Mr. Campbell, the teacher, who rode home with us and called. He is a young man. Ada is today fifteen months old, and has twelve teeth as yet. She is very active, gets in and out of her high chair, and climbs upon everything. There seems to be scarcely anything in the room that I can keep out of her reach, except by constant watchfulness. She begins to try to talk a little, and when she is in a chair and wishes to be taken down, which she generally prefers to getting down herself, she will call out "gone, gone," until some one helps her. She also tries to say hat. In one month Luther will be three years old. He is growing more and more talkative and observing. Dr. vaccinated him yesterday. He is getting to be quite tall. Ada's weight is twenty two pounds. (T.S.R. 37. 2 P.M. 65. S.S. 60.) Mar. 17. Thursday. This has been a very warm day. Mr. Henry Megerle dined with us. (T.S.R. 41. 2 P.M. 76. S.S. 66.) Mar. 18. Friday. A very windy day. Rev. Mr. Curry has preached at the schoolhouse this evening. A notice was given of a business meeting of the Sewing Circle at Mr. Boody's tomorrow afternoon. (T.S.R. 50. 2 P.M. 59. S.S. 50.) Mar. 19. Saturday. Messrs, Hale & Curry made us a call this forenoon. This afternoon. Susie and I have attended the Sewing Circle meeting at Mr. Boody's Nine members were present, but we accomplished nothing except to name the library. It is to be called the "Ladies Library Association of Elliot Township." We tried to locate it, first at the schoolhouse and then at the Post Office, but failed in both attempts. It seemed to be the opinion of most of those present, that a lady librarian should be chosen, but nothing was done to that effect, neither was the bookcase proffered by Mr. Staples accepted. Adjourned till next Thursday. (T.S.R. 34. 2 P.M. 58. S.S. 50.) 1859. Mar. 20. Sabbath. The weather has been cloudy and rainy. Luther has been again vaccinated, as the other vaccination did no good. We learn that John Hern - a lad who attended the Union school taught here by Mr. Walker, and boarded at the Ranch - has murdered a man at Carson Valley, where the family have resided for some time past. He had been gambling with the man for a bridle and won it. Afterwards seeing the bridle used on one of the man's horses, he went and took it. The man went to John's house and demanded the bridle. This was refused him, and as he was endeavoring to enter the house, John shot him dead. John was cleared, however, on the ground that the man was told by Mrs. Hern as he was endeavoring to enter, that if he came in, John would shoot him. John is a young man now - young in years, but old in sin. (T.S.R. 38. 2 P.M. 55. S.S. 51.) Mar. 21. Monday. A rainy day. (T.S.R. 46. 2 P.M. 54. S.S. 54.) Mar. 22. Tuesday. Today we learn that Lucien Atheam has met with a sad accident. A horse fell with him, and he left arm was broken. The Dr. was called to dress the fracture. (T.S.R. 47. 2 P.M. 62. S.S. 52.) Mar. 23. Wednesday. A cloudy day. Rev. Mr. Hale dined with us. Geo. Locke has been here most of the time this afternoon took supper with us, and spent the evening in talking with me, the Dr. being absent. He says he would like to have me come over to the Ranch and visit him and Father, but that he does not wish the Dr. to come into the house at all, or speak to him. He says there is no one he dislikes more than he does the Dr. It makes him unhappy even to look at him. "And yet," said I, "there is no one wishes you more happiness than Dr. does." I also said I did not wish to go where my husband could not go. He said he did not wish me to come unless I thought it proper. I think he is a very unkind brother. (T.S.R. 43. 2 P.M. 60. S.S. 55.) Mar. 24. Thursday. This afternoon, agreeably to appointment, the members of the Sewing Circle mats at Mrs. Gove's, to transact business relative to the library. The box of books was brought over