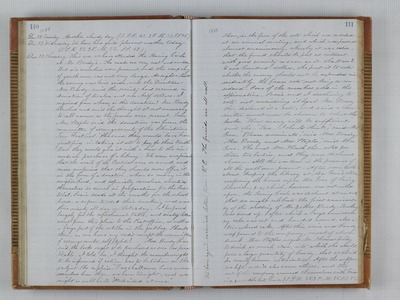 1858. Dec. 28. Tuesday. Another cloudy day. (T.S.R. 43. 2 P.M. 51. S.S. 46.) Dec. 29. Wednesday. We have had quite pleasant weather today. (T.S.R. 32. 2 P.M. 52. S.S. 47.) Dec. 30. Thursday. This eve, we have attended the Sewing Circle at Mr. Boody's. The roads are very wet and muddy. But six members were present, and the company of gentlemen was not very large. At eight o'clock the sewing was laid aside, and the Directress Mrs. Boody - said the society had received a donation of twelve and one - half dollars. I inquired from whom is this donation? Mrs. Boody blushed and said she thought it not necessary to call names, as the persons were present. Soon Mrs. Staples said "the donation was from the committee of arrangements of the Christmas Tree Festival," She said they would have been justified in taking it all to pay for their trouble. But they would give it with a view to the immediate purchase of a library. We were surprised that the avails of the Festival were so small, and more surprised that they should now offer it in the form of a donation, when so many in the neighborhood, and especially ourselves, exerted themselves so much in preparations for the Festival. Susie made all the wreaths for the school. house, or superintended their making and was there nearly all day on Saturday. I prepared largely for the refreshment table, and sixty letters went from this place to the Post office, as well as a large part of the articles in the grab bag. Should then, no one have any credit except the committee of arrangements, self styled? Mrs. Boody then said, the books ought to be purchased as soon as practicable. I told her I thought the members ought to be informed if action was to be taken on the subject. She replied, "O we shall never have more members here than we have tonight, and we might as well have it decided at once." 1858. Then, in the face of the vote which was recorded at our annual meeting, and which was passed almost unanimously, where by it was voted, that the fund should be put at interest with good security as soon as it shall am? to one hundred dollars, she put it to vote whether the money should not be expended immediately, the former vote not being re-considered. Four of the members voted in the affirmative, Susie and I declining to vote, not considering it legal. Mrs. Boody then declared it a vote, and said a committee must now be chosen to select the books. "How many will be sufficient," said she, "two, I should think," said Mrs. Gove. "Please nominate," said Mrs. Boody. "Mrs. Boody and Mrs. Staples," said Mrs. Gove. She and Mrs. Heath then voted for those two ladies, and they were declared chosen. All this was done in the presence of all the gentlemen present. After some talk about keeping the library at Mr. Gove's store, conferring the honor upon Mr. Gove of being librarian, etc. which, however, was not acted upon, the Sewing Circle was declared at an end, that we might celebrate the first anniversary of the wedding of Mr. & Mrs. Boody. Twelve was served up, after which a large anniversary cake was cut and handed round, also a tie - colored cake. After this, wine and handy were passed to the company, most of whom drank. Mrs. Staples urged Mr. Thomas Wiley to drink so much wine, into which she would pour a large quantity of brandy, that we think he nearly became intoxicated. After the supper, we left, as did also some others, and the rest of the company amused themselves with kissing, etc. until a late hour. (T.S.R. 38. 2 P.M. 56. S.S. 51.) We have again received letter four. V. E. The friends are all well.