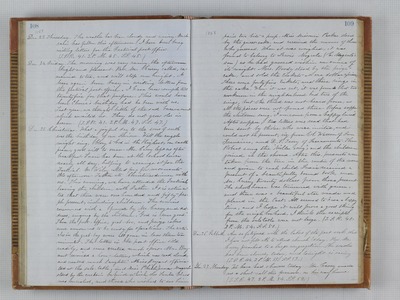 1858. Dec. 23. Thursday. The weather has been cloudy and rainy. Much rain has fallen this afternoon. I have been busy writing letters for the Festival post office. (T.S.R. 41. 2 P.M. 45. S.S. 45.) Dec. 24. Friday. The morning was very rainy, the afternoon bright and pleasant. Rev. Mr. Curry called, remained to tea, and will stop over night. I have again been busy in writing letters for the festival post office. I have now completed twenty five for that purpose. This would have been Elmer's birthday had he been with us. Last year, we thought little of the sad bereavement which awaited us. They do not grow old in heaven. (T.S.R. 41. 2 P.M. 49. S.S. 47.) Dec. 25. Christmas. What a joyful day to the sons of earth was the birthday of our Saviour. Well the angels might sing, Glory to God in the Highest, on earth peace, good will to men. Mr. Curry left us after breakfast. Susie has been at the schoolhouse nearly all day, helping to arrange it for the Festival. Mr. Wiley called for a few moments this afternoon. Father ate Christmas dinner with us. This evening, we have attended the Festival, leaving the children with Father. It is estimated that there were one hundred and fifty people present, including children. The services commenced with a prayer by Mr. Curry and address, singing by the children, "God is ever good." Then the post - office, grab-boo, and prize cakes were announced to be ready for operations. The articles in the grab-bay were all gone in less than ten minutes. The letters in the post office sold readily, and some created much sport Mr. Bryant received a love - letter, which was read aloud, and created much laughter. Miss Bryant officiated at the sale - table, and Miss. Phillijeena Megerlan stood by the curtain behind which old Santer Clans was concealed, and those who wished to see him 1858. paid two bite a peep. Miss Missouri Parker stood by the guess-cake, and received the names of those who guessed, when it was weighed, it was found to belong to Lewis Megerle (C. Megerle's son) as he had guessed within an ounce of its weight. Mrs. Boody stood by the prize-cake, and sold the tickets at one dollar apiece. There were fortyfive tickets, and three rings in the cake. When it was cat, it was found that two workmen in the neighborhood had two of the rings, but the third was not heard from, as all the pieces were not opened there. Before supper the children sang, "I am come from a happy land." After supper, two letters were read that had been sent by those who were invited, and could not be present, viz. from Col. Warren of San Francisco, and D. S. Terry of Sacraments. Then Robert sung the "Miller song," and the children joined in the chorus. After this, presents were taken from the tree in the centre of the room and given to each child. Susie received a present of a beautifully bound book, and Mr. Curry twenty dollars from those present. The schoolhouse was trimmed with green, and there was a beautiful star made and placed in the East. All seemed to have a happy time, and I hope it will prove a good thing for the neighborhood. I think the receipts from the sale table were not large. (T.S.R. 40. 2 P.M. 54. S.S. 50.) Dec. 26. Sabbath. Am so fatigued with the labors of the past weak, that I have not felt able to attend church today. Rev. Mr. Curry preached to a large congregation. The weather has been cloudy today, and tonight is rainy. (T.S.R. 44. 2 P.M. 51. S.S. 53.) Dec. 27. Monday. We have had showers today. Mr. Curry made us a short call his forenoon, on his way home. (T.S.R. 47. 2 P.M. 54. S.S. 50.)