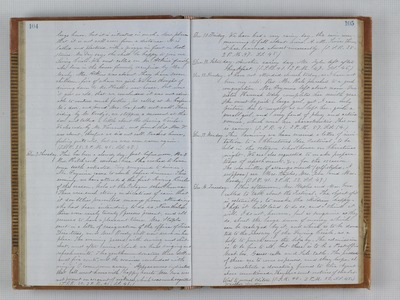 large house, but it is situated in such a low place that it is not well seen from a distance. It is lathed and plastered, with a piazza in front on both stories. Mrs. Day says she shall be happy to join our Sewing Circle. We next called on Mr. Atkins' family, who live in the house formerly occupied by Mr. Manly. Mr. Atkins was absent. They have seven children, five of whom are girls. We had thought of driving down to Mr. Heath's new house, but now it grew so cold, that we couched it was not advisable to venture much farther. We called at Mr. Carpenter's door, and found Mrs. Carpenter not well. Then riding by Mr. Boody's, we stopped a moment at the door and talked a little about the Sewing Circle. We also rode by Mr. Vincent's, and found that Mrs. V. was absent, therefore we did not call. Reached home, feeling quite cold, but we were soon warm again. (T.S.R. 25. 2 P.M. 45. S.S. 43.) Dec. 9. Thursday. This has been a cloudy day. Just before noon, Mr. & Mrs. Hitchcock arrived here. She wished to have some teeth extracted. They remained to dinner. Mr. Frymire came to work before dinner. This evening, we have attended the first Sewing Circle of the season, held at the Octagon schoolhouse. There were such strong indications of rain that it doubtless prevented many from attending who had been intending to do so. Nevertheless, there were nearly twenty persons present, and all seemed to have a pleasant time. Mrs. Staples sent in a letter of resignation of the office of First Directress, and Mrs. Boody will now serve in her place. The evening passed with sewing and chit-chat, and after nine o'clock we had singing and refreshments. The gentlemen donated three dollars and five cents, and the exercises concluded with singing 'O come, come away'. Appearances indicated that all went home with happy hearts. Mrs. Gove was not present on account of sickness, which was much regretted. (T.S.R. 30. 2 P.M. 46. S.S. 43.) Dec. 10. Friday. We have had a very rainy day, the rain commencing to fall about nine. A. M. Susie then, it has - rained almost incessantly. (T.S.R. 38. 2 P.M. 47. S.S. 45.) Dec. 11. Saturday. Another rainy day. Mr. Tyler left after breakfast. (T.S.R. 41. 2 P.M. 49. S.S. 46.) Dec. 12. Sunday. I have not attended church today, as I have not been very well. Rev. Mr. Hale preached to a good congregation. Mr. Frymire left about noon. Our sister Hannah today completes her ninth year. She must be quite a large girl, yet I can only picture her to myself as we left her, quite a small girl, and very fond of play and active exercise, which were here characteristics. This eve is rainy. (T.S.R. 41. 2 P.M. 57. S.S. 54.) Dec. 13. Monday. This evening we have received a letter of invitation to a Christmas Thee. Festival, to be held in the octagon schoolhouse on Christmas night. We are also requested to make preparations of refreshments, &c. for the occasion. The committee of arrangements (self-styled, I suppose) are Mrs. Staples, Mrs. Gove and Mrs. Boody. (T.S.R. 40. 2 P.M. 53. S.S. 49.) Dec. 14. Tuesday. This afternoon, Mrs. Staples and Mrs. Gove called to talk about the Festival. The object of it is ostensibly, to make the children happy. I hope it will tend to do so, and I think it will, I do not, however, feel as sanguine as they do, about the large sum of money which can be realized by it, and which is to be donated to the Treasury of the Sewing Circle, as a help to purchasing the library. The admission is to be free to all, but there is to be a Post office Grab-boo, Greess-cake and Sale table. The proceed of these are to cover expenses, and they hope, also constitute a donating fund to the object above mentioned. They have sent notices of the Festival to several Editors. (T.S.R. 40. 2 P.M. 52. S.S. 48.) Weather cloudy.