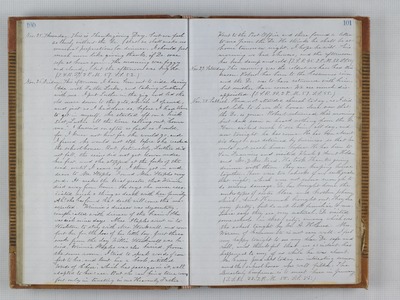 Nov. 25. Thursday. This is Thanksgiving Day, but we feel so lonely without the Dr. that we shall make no unusual preparations for dinner. I should feel much more like giving thanks, if Dr. was safe at home again. The morning was foggy and cloudy, but the afternoon was bright. (T.S.R. 39. 2 P.M.57. S.S. 52.) Nov. 26. Friday. This afternoon I have been out to ride, leaving Ada with Father Locke, and taking Luther with me. I put Luther in the gig and led the old mare down to the gate, which I opened, and just as I had done so, before I had time to get in myself, she started off on a brisk trot, Luther all the time calling out, "Come ma." I hurried on after as fast as I could, for I knew not how far she would go, and I feared she would not stop before she reached the schoolhouse. But fortunately, Luther did not fall, the reins did not get down under her feet, and she stopped at the forks of the road, until I came up. I then got in and drove to Mr. Staples. Found Mrs. Staples very sad, It makes the trial greater, that Winnie died away from home. She says she never associated such a thing as death with her family. Ah! she has found that death will come tho’ unexpected. Winnie's disease was dysentery, complicated with disease of the brain. She was sick nine days. Mrs. Staples went in to Stockton to stay with Mrs. Stockwell, and comfort her for the loss of her little boy. Just three weeks from the day Willie Stockwell was buried, Winnie Staples was also buried, from the same room. I tried to speak words of comfort to her, and lent her a book, entitled "Words of Cheer," which has passages in it, well adapted to her case. But she can find true comfort only in trusting in our Heavenly Father. Went to the Post Office and there found a letter to me from the Dr. He thinks he shall be at home tomorrow night. I hope he will. This morning we had showers, and the afternoon has been damp and cold. (T.S.R. 45. 2 P.M.53. S.S. 51.) Nov. 27. Saturday. This morning was the coldest we have had this season. Robert has been to the Cosumnes river and the Dr. was to have returned with him, but neither have come. We are much disappointed. (T.S.R. 32. 2 P.M.57. S.S. 55.) Nov. 28. Sabbath. Have not attended church today, as I did not like to have the house alone now that the Dr. is gone. Robert returned this morning but had seen or heard nothing from the Dr. Have wished much to see him all day, and now tonight he has come. He has been absent six days - was detained by business so that he could not reach home before. He has been to San Francisco and visited Uncle & Aunt Holden and Mr. & Mrs. Read. He took Thanksgiving dinner with them. They are keeping house together, There were two shocks of an earthquake that night, which were not revere enough to do serious damage. Dr. has brought home the ambrotypes of sister Clara and brother Johnny, which Aunt Hannah brought out. They are very pretty, but do not look familiar to me. Susie says they are very natural. Dr. visited some schools in that city, among which was the school taught by Mr. A. Holmes. Mrs. Warren of Sacramento is not very well. I feel very happy tonight to see my dear Dr. safe and well, and thankful that no accident has happened to any of us while he was absent. Mr. Curry preached today an interesting sermon, and the schoolhouse was well filled. The Quarterly Conference is to meet here in January. (T.S.R. 33. 2 P.M.58. S.S. 55.)