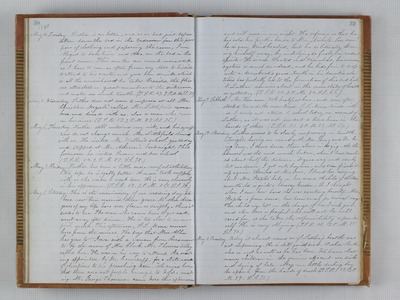 1858. May. 4. Tuesday. Luther is no better, and as we had just before taken down the bed in the bedroom for the purpose of clothing and papering the room, I am obliged to have him and Ada on the bed in the front room. This makes me much more work, as I have to run so often from my stove to his side. to attend to his wants, and give him drinks, which is all the nourishment he takes. Besides, the flies are attracted in great numbers to the sickroom, and make me much trouble. (T.S.R. 47. 2 P.M. 80. S.S. 73.) May 5. Wednesday. Luther does not seem to improve at all. Mr. Christian Megerle called. Mr. Littlefield came here and dined with us, also a man who came on business. (T.S.R. 53. 2 P.M. 83. S.S. 76.) May 6. Thursday. Luther still continues very sick, and his symptoms do not change much. Mr. Littlefield dined with us. He visited Mr. Walker's school yesterday and stopped at Mr. Athearn's last night. This forenoon he visited Susan and her school. (T.S.R. 54. 2 P.M. 87. S.S. 78.) May 7. Friday. Luther has been a little more comfortable today. We hope he is really better. A man took supper with us who wishes to work here. He is very slovenly in his appearance. (T.S.R. 62. 2 P.M. 87. S.S. 78.) May 8. Saturday. This is the anniversary of our wedding day. We have now been married three years. No other three years of my life have ever flown so swiftly - thus it seems to me. The man who came here to get work, went away after dinner. He is too slow to accomplish much. This afternoon, S. L. Moore came here from the mines. He says that Mrs. Allen has gone to Iowa with a woman from Sacramento by the name of Mrs. Clark. Mr. Thomas Wiley called here. He was on his way to attend the meeting appointed by Mr. Carnduff, for a statement of objections to his preaching here. We since learn that there were not people enough to hold a meeting. Mr. George Thomason came here this afternoon, and will remain over night. He informs us that he has sold his public house to Mr. Nichols. Poor man! he is very kind hearted, but he is literally throwing himself away, by indulging so freely in ardent spirits. He is now bloated and tremulous, his nervous system is much disordered, and he bids fair to drop into a drunkard's grave. Trouble in his domestic relations has probably led to the formation of this sad habit. Luther remains about in the same state of health as yesterday. (T.S.R. 50. 2 P.M. 84. S.S. 66.) May 9. Sabbath. Mr. Thomason took breakfast here, and soon after started towards the mountains. S. L. Moore dined with us. I could not attend S. school today on account of Luther, as it was not prudent to leave him in the hands of others. (T.S.R. 51. 2 P.M. 83. S.S. 67.) May 10. Monday. Luther seems to be slowly improving in health. Tonight, having an errand with Mrs. Gove, and Dr. being busy, I drove down there alone in the gig. As the harness was old and much broken, when I had reached about half the distance, it gave way and nearly let me down. I got out, however, and soon fixed it up again. Arrived at Mrs. Gove's, I found her carrying about Mrs. Staples' baby in her arms. A child of thirteen months old is quite a heavy burden. So I thought when I saw how hard she was exerting herself. Mrs. Staples is from home, has been away for several days. The child was left in the charge of her Irish girl, and Mrs. Gove is fearful she will not be well cared for, so she takes the responsibility upon herself. She is very obliging. (T.S.R. 48. 2 P.M. 85. S.S. 70.) May. 11. Tuesday. Today it almost seems as if Luther's health was not improving. He is still quite sick. Father Locke also is not as well as he has been. We learn that many children in the mines adjacent are sick and dying of late. May our little darling boy be spared from the hands of death. (T.S.R. 53. 2 P.M. 89. S.S. 71.)