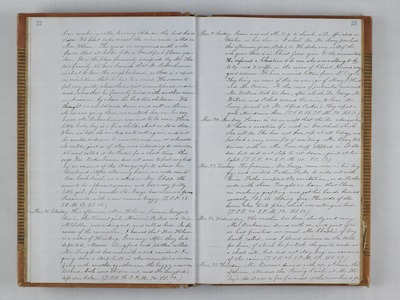 been making calls, leaving Ada on the bed beside Susie. We first rode across the river and called on Mrs. Wilson. The yard is so covered with wild flowers that it looks like a beautiful flower garden. It is the place formerly occupied by Mr. Hertor's family. We here learned that Mr. Bodenhamer is about to leave the neighborhood, as there is a report in circulation that he has two wives. He seems to feel very guilty when the subject is mentioned, and indeed, owns that he formerly lived with another woman in Missouri, by whom he had two children. We thought we would ride down and call on them. As we were going there, we overtook her on her way home, Mr. Bodenhamer was not to be seen. Their little baby boy is a fine child, about as old as Ada. When we left, she invited us to call again, and said she would endeavor to come over and see us whenever she could, just as if they were intending to remain, We next called at Mr. Foster's for a short time. She says Mrs. Bodenhamer does not seem to feel very badly on account of the strange reports about her husband. After returning home, we rode over to Bear Creek Ranch, and called on Mrs. Clapp. She seems to be a pleasant woman and has a very pretty little girl, five months old. George has returned from Sacramento, with a new covered buggy. (T.S.R. 32. 2 P.M. 67. S.S. 58.) Mar. 20. Saturday. This afternoon, Mrs. Holman, Emma, George & Annie, the Vincent girls, Missouri Parker and Miss McLellan were riding out, and called here. In the course of the conversation, I learned that Mrs. Holman is a native of Hamburg, Germany. After they had departed, Messrs. Langford and Walker called. Mr. Langford has met with a sad accident. In going down a steep hill in the mountains in company with another gentleman, the buggy was over turned, both were thrown out, and Mr. Langford's left arm broken. (T.S.R. 36. 2 P.M. 70. S.S. 62.) Mar. 21. Sunday. Susan was not able to go to church, so Dr. officiated as teacher in her class in S. school. Rev. Mr. Curry preached this afternoon from 1 Peter 1.10. He spoke very well of the rich grace there is in Christ Jesus - grace to the unmerited. He defined a Christian to be one who was willing to be, to do, and to suffer in the cause of Christ. It was a very good sermon. We have received letters from N. E. again. They bring us news of the marriage of Mary S. Hunt and Mr. Prince. No other news of particular moment. Mr. Wallace took tea here, after which, Dr. George, Mr. Wallace and Robert crossed the river to hear Mr. Curry preach at Mr. Alfred Parker's. They report a good attendance there. (T.S.R. 38. 2 P.M. 72. S.S. 60.) Mar. 22. Monday. Susan is so unwell that the Dr. advises her to have a vacation of a week in her school, which she will do. She has not been up at all today, and has had a very severs fit of vomiting. Mr. Curry took dinner with us. Mr. Carnduff stopped in at the door but did not stop to sit down, just at twilight. (T.S.R. 44. 2 P.M. 70. S.S. 61.) Mar. 23. Tuesday. This forenoon, Bro. George came over is his buggy, and invited Father Locke to ride out with him. Father accepted the invitation, and Luther rode with them. Tonight we learn that Elmer in making grafting - was, got his hands burned severely, by its taking fire. The side of the house also took fire, which was extinguished. (T.S.R. 40. 2 P.M. 72. S.S. 60.) Mar. 24. Wednesday. The weather has been cloudy and rainy. Mr. Brakeman dined with us, and just after we had finished our meal, Mr. Chaplin of Dry Creek called, and I placed dinner on the table for him, of which he partook. Augusta made us a short call, but did not stay long, on account of the rain. (T.S.R. 46. 2 P.M. 61. S.S. 57.) Mar. 25. Thursday. Mr. Burrows dined with us. I have, this afternoon, attended the Sewing Circle at Mr. Wiley's. As it was so far for most of the members to go,