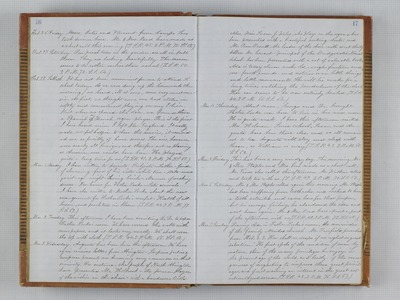 Feb. 26. Friday. Messrs. Bates and Vincent from Campo Seco took dinner here. Mr. & Mrs. Read have made us a short call this evening. (T.S.R. 45. 2 P.M. 73. S.S. 68.) Feb. 27. Saturday. Our peach trees in the garden are all in full bloom. They are looking beautifully. The season seems to be rather earlier than usual. (T.S.R. 50. 2 P.M. 72. S.S. 64.) Feb. 28. Sabbath. It has not been convenient for me to attend S. school today. As we were doing up the housework this morning, we heard, all at once, some very sweet music. At first, we thought someone had stolen in softly and commenced playing on my Eolian. But when we opened the door, we found there a Spanish or French organ - player. This is the first I have heard since I left New England. It really made me feel happier to hear the music, it reminded me so forcibly of home scenes. The airs, however, were nearly all foreign, and therefore not so pleasing as American ones would have been. He played quite a long time for us. (T.S.R. 41. 2 P.M. 74. S.S. 65.) Mar. 1. Monday. I have written to parents. Subjects Luther fond of churning - fond of his sister - white tire - Babe - more quiet - age - weight - Swing Circle - Manner of making dresses - New house for Father Locke - Late arrivals. I have also written to Mother Locke about the new arrangements for Father Locke's comfort Health of all - Susan, and peach trees in bloom. (T.S.R. 44. 2 P.M. 77. S.S. 69.) Mar. 2. Tuesday. This afternoon I have been assisting the Dr. to paper Father Locke's room. We have covered the walls with news papers, and it looks very neatly. We shall cover the top with cloth. (T.S.R. 44. 2 P.M. 66. S.S. 60.) Mar. 3. Wednesday. Augusta has been here this afternoon. We have again received letters from Abington. Surprise parties & surprise presents are becoming very common in that vicinity. For instance, the people of North Abington have presented Mr. Holbrook - the former player of the violin in the choir - with a handsome Bible. Also, Miss Susan J. Wales, who plays on the organ, has been presented with a beautiful writing-desk; and Mr. Oren Orcutt - the leader of the choir - with about thirty dollars. Mr. Conant - principal of the Bridgewater Normal School has been presented with a set of valuable books. Ada is today eleven weeks old - weighs fourteen and one - fourth pounds - and notices even little things and little movements. She will lie awake for a long time, watching the pendulum of the clock. Her ear seems to be now entirely healed. (T.S.R. 44. 2 P.M. 65. S.S. 60.) Mar. 4. Thursday. About noon, George and Dr. brought Father Locke over here to live in his new room. He is quite weak. I have this afternoon visited Mrs. Holman. Since school, Susan and Augusta have been there also, and we all remained to tea. Augusta will stay and sleep with Susan, as William is away. (T.S.R. 43. 2 P.M. 68. S.S. 62.) Mar. 5. Friday. This has been a very windy day. This morning, Mr. & Mrs. Staples and Mrs. Gove made us a short call. Mr. Vance also called this afternoon. Mr. Walker called and took tea with us. (T.S.R. 49. 2 P.M. 70. S.S. 62.) Mar. 6. Saturday. Mr. & Mrs. Staples called again this morning. Mr. Staples had been suffering from toothache, and wished to have a tooth extracted, and came here for that purpose, but his courage failing, he abandoned the idea and went home again. Mr. & Mrs. Read have spent a part of the afternoon with us. (T.S.R. 42. 2 P.M. 73. S.S. 68.) Mar. 7. Sunday. Leaving Ada in Father Locke's room, the remainder of the family attended church. Mr. Fairfield preached from Heb. 2. 3. "How shall we escape if we neglect so great salvation." He first spoke of the condition of man by nature, then of the many privileges he enjoys in the present age of the world, and lastly, of the consequences of neglecting to improve these great privileges, and of not securing an interest in the great salvation. A good sermon. (T.S.R. 45. 2 P.M. 76. S.S. 67.)