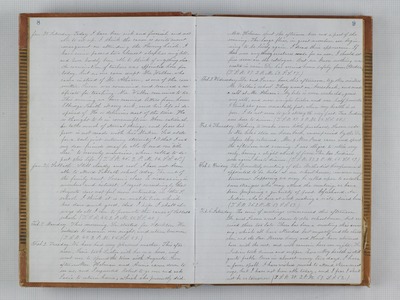 Jan. 30. Saturday. Today I have been sick and feverish and not able to sit up. I think the cause is excitement consequent on attending the Sewing Circle. I have since passed two almost sleepless nights, and have hardly been able to think of anything else. An examination of teachers was appointed here for today, but no one came except Mr. Walker, who came instead of Mr. Athearn, as one of the committee. Susan was examined and received a certificate for teaching. Mr. Walker remained to tea. This evening we have received letters from home. Elbridge Smith is very sick, and his life is despaired of. He is delirious most of the time. He is thought to be in consumption. When rational, he talks much of eternal things, and fears his peace is not made with his Maker. Sad state for a soul just entering! O that I and my dear friends may be able to read our "title clear" to heavenly mansions, when called to depart this life. (T.S.R. 46. 2 P.M. 54. S.S. 46.) Jan. 31. Sabbath. Still cloudy and cool. I have not been able to attend Sabbath school today. The rest of the family went. Susan's class is increasing in numbers and interest. I regret exceedingly that Augusta does not feel more interested in the S. school. I think it is an institution which has done much good. And I hope. I shall always do all I can to promote the cause of Sabbath schools. (T.S.R. 45. 2 P.M. 55. S.S. 48.) Feb. 1. Monday. This morning. Dr. started for Stockton. He intends to remain over night, and return tomorrow. (T.S.R. 43. 2 P.M. 56. S.S. 53.) Feb. 2. Tuesday. We have had very pleasant weather. This afternoon, Susie took Luther with her on a horse, and went over to spend the time with Augusta. Soon after, Mrs. Holman and Annie came down to see us, and I requested Robert to go over and ask Susie to return home, which she presently did. Mrs. Holman spent the afternoon here and a part of the evening. The large flies, in great numbers, are beginning to be lively again. I dread their appearance. If there were any creatures made for no use, I should set flies down on the catalogue. But we know nothing was created in rain. Dr. has arrived home safely from Stockton. (T.S.R. 37. 2 P.M. 63. S.S. 57.) Feb. 3. Wednesday. Dr. and Susan have, this afternoon, together visited Mr. Walker's school. They went on horseback, and made a call at Mr. Athearn's. My babe is seven weeks old, grows very well, and now weighs twelve and one-half pounds. I think she gains remarkably fast, when my health is so poor. I do not seem to get strength very fast. Two Indians were here to dinner. (T.S.R. 37. 2 P.M. 63. S.S. 58.) Feb. 4. Thursday. Wishing to make some little purchases, Susan rode to Mr. Gove's store on horseback, accompanied by the Dr. Before they returned, Mr. & Mrs. Read came and spent the afternoon and evening. I was obliged to retire very early, having a slight attack of fever. The two Indians were again here to dinner. (T.S.R. 37. 2 P.M. 65. S.S. 59.) Feb. 5. Friday. The Quarterly meeting of the Methodist Conference is appointed to be held at our schoolhouse, commencing tomorrow. Supposing we may be called upon to entertain some strangers who may attend the meeting, we have been preparing a quantity of food beforehand. An Indian, who is here at work making a riata, dined here. (T.S.R. 36. 2 P.M. 69. S.S. 63.) Feb. 6. Saturday. The series of meetings commenced this afternoon. Dr. and Susan went down to the schoolhouse, but arrived there too late. There has been a meeting this evening, which all have attended but myself and the children, and the Rev. Messrs. Curry and Hunt have returned here with the rest, and will remain here over night. The Indian took dinner and supper here. My health is still quite feeble. Once in almost every two days, I have a fever spell. I have wished much to attend these meetings, but I have not been able today, and I fear I shall not be so tomorrow. (T.S.R. 38. 2 P.M. 69. S.S. 62.)