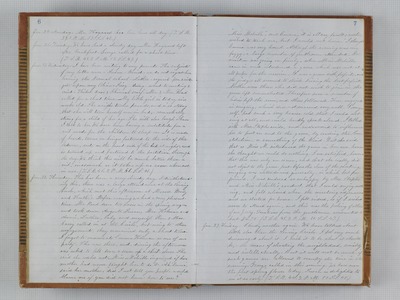 Jan. 25. Monday. Mr. Haywood has been here all day. (T.S.R. 39. 2 P.M. 55. S.S. 48.) Jan. 26. Tuesday. We have had a cloudy day. Mr. Haywood left after breakfast. George called for a short time. (T.S.R. 45. 2 P.M. 55. S.S. 49.) Jan. 27. Wednesday. I have been writing to my parents. The subjects of my letter were - Susan - Kind - we do not regret her leaving the Normal school - Luther - roguish - pen & ink- gets upon my Eolian - Sissy - strong - went to meeting & cried. Thibet dress & Chineal scarf. Mr. & Mrs. Read called for a short time. My little girl is today six weeks old. She weighs twelve pounds, and is so strong that she will turn herself over in bed, remark ably strong for a child of her age. She will also laugh when I talk to her. We have been having a substitute for a crib made for the children to sleep on. It is made of boards, turns on hinges fastened to the side of the bedroom, rests on the front side of the bed at night, and is turned up and fastened to the partition through the day. We think this will be much better than a crib, inasmuch as it takes up no room when not in use. (T.S.R. 46. 2 P.M. 51. S.S. 48.) Jan. 28. Thursday. This has been a very cloudy day. Notwithstanding this, there was a large attendance at the Sewing Circle, which met this afternoon at Messrs. Boody and Heath's. Before evening we had a very pleasant time. Mr. Read drove two horses in the spring wagon and took down. Augusta, Susan, Mrs. Holman and Annie, Luther, baby and myself. Rev. & Mrs. Curry called in at the Circle, but owing to other engagements, they remained only a short time. I forgot to enumerate Emma Holman as one of our party. She was there, and, during the afternoon was asked to fell down a seam of a shirt sleeve. She said she could not Miss Melville inquired if her mother had never taught her to do it. "Ah! Emma," said her mother, "did I not tell you people would blame me if you did not know how to sew?" "Miss Melville," said Emma, "It is all my fault; mother wished to teach me, but I would not learn. "I thought Emma was very honest. Although the evening was very foggy, a large number of gentle men attended. Conversation was going on finely, when Miss Melville came in and introduced a game which was not at all proper for the occasion. It was a game with forfeits, and the judges all seemed to think kissing the best forfeit. Neither were those who did not wish to join in the game left unmolested. Therefore soon a number of ladies left the room, and others followed. These engaged in singing, which did not succeed very well. I, myself, had such a very hoarse cold that I could not sing at all, and could hardly speak aloud. I talked with Mrs. Staples aside, and endeavored to influence her to put an end to the game, by reading the Constitution, or something of the kind. But she said that as Miss M. introduced the game in her own house she thought we could do nothing. I am satisfied, however that this was only an excuse, and that she really did not object to the game. Just before the close of the meeting singing was introduced generally, in which but few joined. I was rendered so unhappy by Mrs. Staples and Miss Melville's conduct, that I could enjoy nothing, and felt relieved when the meeting adjourned and we started for home. I felt indeed, as if I wished never to attend again, and this was the feeling of others of our party. Donations from the gentlemen amounted to but $4.75. (T.S.R. 48. 2 P.M. 50. S.S. 47.) Jan. 29. Friday. Cloudy weather again. We have talked about little else than the Sewing Circle. I feel very much discouraged about it. I wish it to be what it should be, the means of elevating the neighborhood, socially and intellectually. But it will not be such, if such games are allowed to occupy the time in the evening. George called in this evening. We have seen the first spring flower today. Susan is delighted to see it so early. (T.S.R. 44. 2 P.M. 50. S.S. 48.)