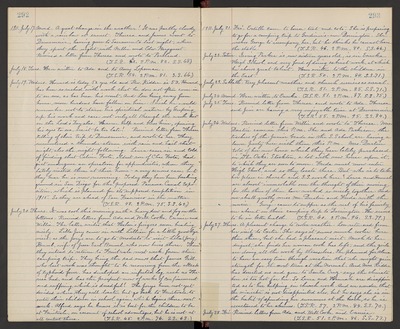 1911. July 17. Mond. A great change in the weather! It was partly cloudy with a rainbow at sunset. Theresa and James went to Dunsmuir, having gone to Sacramento last night, where they spent the night with Nellie and Edw. Bergquest. Received a letter from Theresa and wrote to Portland. (T.S.R. 62. 2 P.M. 82. S.S. 68.)

July 19. Wednes. Howard is today 52 yrs. old and Rev. Kidder is 53. Howard has been so rushed with work that he does not often come in to see me, as has been his wont. And Lou being away from home, more burdens have fallen on him. I wish he would remember not to starve his spiritual nature by keeping up his work and care not only all through the week but on the Lord's Day also. Heaven help and bless him, opening his eyes to see, [?] it be too late! Received letter from Theresa telling of their trip to Dunsmuir, and wrote to her. They encountered a thunder- storm with rain and hail that night, also the night following. Laura came in and told of finding that Calvin Foote, eldest son of Chas. Foote, had just undergone an operation for appendicitis, when they lately visited them at their home - a very serious case, but they hear he is now recovering. Today they have been breaking ground in San Diego for the proposed Panama Canal Exposition, which is planned for its supposed completion in 1915. So they are ahead of San Francisco in the matter. (T.S.R. 48. 2 P.M. 75. S.S. 62.)

July 20. Thurs. It was cool this morning with a heavy dew and fog on the bottoms. Received letters from Ada and Will Cooke, Eunice and Willie. The latter writes that Helen's fingers seem healing nicely. Lilla Jory came in with Lillian for a little goodbye visit, as the Jorys are to go to Modesto to visit Lila (Jory) Bruml, wife of Jesse Earl Bruml, who now lives there. Then they intend to return to Fruitvale next week, from their camping trip. They bring the sad news that James Gill, who last week was thought to be recovering from the attack of typhoid fever, has developed an infected leg, such as Theresa had, and has the prospect now of weeks of confinement and suffering, which is dreadful! The Jorys have not yet decided where they will locate, but go back to Fruitvale to enter their children in school again, which begins there next week. Alfred says he knows it is best for the children to be at Fruitvale, on account of school advantages, but he is not at all content there. (T.S.R. 45. 2 P.M. 76. S.S. 63.)

July 26. Wednes. Received letter from Willie and wrote to Theresa. Mrs. Dustin came in this P.M. She and Ada Parkison, the teachers of the Junior Grade in the S.S. School, are having a lawn party here with them this P.M. Mrs. Dustin told of her new home which they have lately purchased in "The Oaks", Stockton, a lot with new house upon it, to which they are soon to move. Freda must now enter High School, and so they locate there. But who is to take her place in church and S.S. work here? Laura and Hannah are almost inconsolable over the thought of their moving, for the three of them have worked so nicely together. And we shall greatly miss Mr. Dustin and Freda with the music. George came to supper as the rest of his family are absent on their camping trip to Darrington. He seems to be in better health. (T.S.R. 60. 2 P.M. 96. S.S. 79.)

July 27. Thurs. A pleasant change to cooler weather. Lou returned from her visit to Exeter. She says it seems much cooler here than there, but she had a pleasant visit. Much to her disgust, she finds her woman cook has left, and the girls are doing all the work by themselves. She planned for Alma to have an easy time through vacation that she might gain strength for the next term at the Normal. And Mrs. Kidder has deserted us and gone to Santa Cruz - says the climate here is too hot for her. So Laura and Hannah are disappointed as to her helping in church work. And we wonder that the minister is not disappointed also, but he says she is in the habit of spending her summers at the beach, so he is accustomed to her absences. (T.S.R. 57. 2 P.M. 84. S.S. 70.)