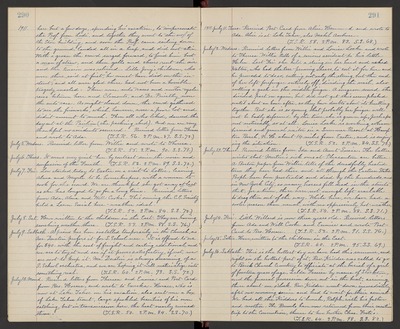 1911. here but a few days, spending his vacation, to impersonate the Prof. from Lodi, and together they went to the roof of the Store building, and soon the Prof. came sailing down to the ground, landed all in a heap, and did not stir. With a groan the crowd surged forward, to find him but a man of straw, and the yells and cheers rent the air and the tension was relived. Lilla Jory's children, who were there, said at first, "he must have died on the instant", and all were glad there had not been a horrible tragedy enacted. There were auto races and motorcycle races between here and Clements, and Dr. Priestly won the auto race. As night closed down, the crowned gathered to see the fireworks, which, however, were a poor lot and didn't amount to much. Then all who liked, danced the day out at the Pavilion (the packing shed). And we are very thankful no accidents occurred. Received letter from Theresa and wrote to Ada. (T.S.R. 56. 2 P.M. 87. S.S. 72.)

July 7. Fri. Lou started today to Exeter on a visit to Lottie, leaving Alma and Myrle to be housekeepers, with a woman to cook for the crowd. We are thankful she got away at last as she has longed to go for a long time. Received letters from Ada, Alma and Will Cooke. This evening the C.E. Society held a Lawn Social here - weather ideal. (T.S.R. 52. 2 P.M. 84. S.S. 72.)

July 9. Sabbath. A piano has been installed temporarily in the Church, as Mr. Dustin prefers it for S. School use. It is offered to us for $40. with the cost of freight and carting additional, and we are to try it and see if it proves satisfactory, if not, we are not to keep it. Mr. Dustin is always dreaming of a S. School orchestra, and we are hoping it will materialize into something real. (T.S.R. 60. 2 P.M. 93. S.S. 72.)

July 10. Mond. Received letters from Theresa and Eunice and Post-Card from Bro. Horace, and wrote to Eureka - Horace, who is now at Lake Tahoe on his vacation, also sent me a box of Lake Tahoe trout, large speckled beauties of his own catching, but in transmission here, the hear nearly ruined them. (T.S.R. 50. 2 P.M. 84. S.S. 70.)

July 12. Wednes. Received letters from Willie and Louise Locke and wrote to Theresa - Willie tells of a serious accident to his little Helen. Last Fri. she held a string in her hand and asked Walter, who had the tree-pruning shears, to cut it for her and he proceeded to do so, cutting not only the string, but the end of her left forefinger entirely off, dividing the nail, also cutting a gash in the middle finger. A surgeon sewed the divided part on again, but did not get this accomplished until about an hour after, so they have doubts about its knitting together. But she is so young that probably her finger will not be badly deformed by the time she is grown up, perhaps not noticeably so at all. Louise Locke is working as chambermaid and general waiter in a Summer Resort at Hampton Beach, N.H, about 14 miles from Exeter, and is enjoying the situation. (T.S.R. 52. 2 P.M. 84. S.S. 72.)

July 13. Thurs. Received letters from Ida and Aunt Susie. The latter writes that Mertice's sick ones at Pleasanton are better. A Boston paper from Willie tells of the dreadfully heated term they have had there and all through the Eastern States. People have been prostrated and died by the hundreds, and in New York City, so many horses fell dead in the streets that, for a time, there were not enough left available to drag them out of the way. While here we have had a cooler season than usual, with no oppressively hot weather. (T.S.R. 54. 2 P.M. 88. S.S. 71.)

July 16. Sabbath. This is the hottest day we have had this summer, and right in the hottest part of it. Rev. Kidder was called to go to Brick Church Cemetery to officiate at the burial of a girl of fourteen years of age, Zelda Fessier by name of Stockton, and the funeral procession drove out in the heat, arriving there about one o'clock. Rev. Kidder went down immediately after our morning service and had to wait for their arrival. We had all the Kidders to lunch, Ralph, with his father and mother. The Brumls have now returned from their vacation trip to the Convention, thence to her brother Chas. Foote's. (T.S.R. 64. 2 P.M. 98. S.S. 82.)