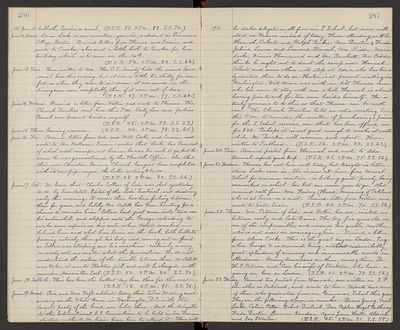 June 12. Mond. Louise Locke is now nineteen years old, a student in Simmons College, Boston. Received letters from Theresa and Eunice and wrote to Eureka also sent a little book to Benton for his birthday, which is to come on the 14th. (T.S.R. 54. 2 P.M. 82. S.S. 66.)

June 13. Tues. Have written to Ada. The C.E. Society held the second lawn social here this evening, but it was a little too chilly for comfort, so when they came to ice-cream, it was served in the dining room more acceptably than it if were out-of-doors. (T.S.R. 47. 2 P.M. 77. S.S. 64.)

June 16. Fri. Received letters from Ada and Will Cooke and Eunice and wrote to Rev. Wallace - Eunice writes that Locke has been out of school with mumps, not because he was too sick to go, but because he was quarantined by the Health Officer. Also that their new Christian Science Church has just been completed with its new pipe organ, the latter costing $10,000. (T.S.R. 48. 2 P.M. 82. S.S. 66.)

June 17. Sat. We learn that Charles Sollars of Lodi was shot yesterday A.M. by Sam. Axtell, Editor of the Lodi Sentinel, and died very early this morning. It seems there has been feeling between them for years, and lately Mr. Axtell has been hunting for a chance to murder him. Sollars had just come into town on his automobile and stepped into the Garage intending to make some repairs on his auto, when Axtell sneaked in behind him and shot him twice in the back, both bullets passing entirely through his body and coming out in front as Sollars was stooping over his machine, certainly a very cowardly act, no matter what the provocation. We do not understand the nature of the trouble between them. Mr. Axtell was taken at once to Stockton jail, and will be charged with murder. Have written East. (T.S.R. 52. 2 P.M. 84. S.S. 72.)

June 19. Mond. Pres. and Mrs. Taft celebrate today their Silver Wedding anniversary in the White House in Washington, D.C. with the largest party of the kind ever held there - And the delegates to the International S.S. Convention to be held in San Francisco started on the A.M. train from here to attend it. There will

1911. be twelve delegates in all from our S. School, but some will start on Wednes - instead of today. Thos attending will be Hannah, Celeste and Ralph Parker, Mrs. Dustin & Freda Julius, Laura and Leonard Bruml, Mrs. Kidder, Marie Locke, Winnie Hammond and Mr. Burkett. Rev. Kidder thinks he ought not to desert the camp now. Hannah, Celeste and some others will stop at Ada's, who has kindly invited them to do so. Hester is at present visiting in Washington. Will Moore was with me till Theresa came who has come to stay with me while Hannah is absent leaving Jim to cook for ten men besides himself. He is truly generous to do this so that Theresa can be with me! The Church Trustees held an extra meeting here this P.M. to consider the matter of purchasing a piano for the S. School services, one that has been offered us for $40. Perhaps it is not good enough to make it worth while. Mr. Dustin will examine and report. Have written to Portland. (T.S.R. 56. 2 P.M. 82. S.S. 63.)

June 21. Wednes. Theresa has not been well today but tonight is better. Alma Locke came in. She is now at home from Normal School for summer vacation - is looking quite poorly, having overworked in school - has but one more year to go. Also received call from Mrs. Fanny (Hurd) Manning of Oakland who is at home on a visit. Received letter from Willie and wrote to Sister Susie. (T.S.R. 44. 2 P.M 70. S.S. 56.)

June 22. Thurs. Mrs. Peterson of Lodi and Bobbie, her son, visited us between early and late trains. The boy, five years old, is one of the irrepressibles, and worries his gentle mother, who is not wise in managing him. Received a letter from Alma Cooke. This is the great day in London, Eng. when George V. is crowned king, with indescribably great splendour of ceremony and innumerable crowds in attendance. Many Americans are there, among them Dr. H.C. Peterson and Cora his wife of Stockton. who have a young son born London. (T.S.R. 42. 2 P.M. 73. S.S. 56.)

June 23. Friday. Received two postals from Hannah, one written in S.F. the other in Oakland, and wrote to her - Reports have come of those who graduated from our Grammar School this year. They are the following eleven in number: - Burres Young, Niel Locke, Calvin Pattee, Robert Dietrick, Dora Paplow, Hazel Tretheway Freda Dustin, Lawrence Knudsen, Agnes Jones, Hattie Aldrich and Ivy Stemler. (T.S.R. 45. 2 P.M. 71. S.S. 58.)