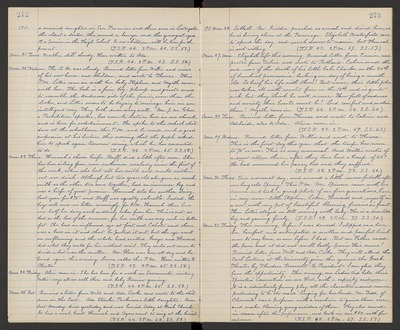 Mar. 22. Wednes. The A.M. was cloudy. Received letter from Willie and views of his new house and children, and wrote to Theresa. This P.M. Lottie came in with her baby Stephen, and Myrtle came with her. The babe is a fine boy - plump and quiet - seems to resemble the Anderson side of the family more than the Lockes, and Lottie seems to be trying to manage him in an intelligent way. They both seem very well. Mr. J. M. Glass, a Prohibition speaker, has come to lecture here in our church and is here for entertainment. He spoke to the school children at the school house this P.M. and he made such a good impression at his lecture this evening that the people asked him to speak again tomorrow evening, which he has consented to do. (T.S.R. 48. 2 P.M. 65. S.S. 58.)

Mar. 23 Thurs. Hannah's choice heifer. Buff, died a little after noon. she has been ailing from some unknown malady since the first of the week, when she lost all her milk and would neither eat nor drink. Although but two years old she gave as much milk as the other two cows together, had an immense bag and was a heifer of great promise. Hannah sold her mother, Daisy, last year for $75. and Buff was equally valuable. Indeed, the boys sell cows no better, seemingly, for $100. Hannah thus has one-half her dairy work suddenly taken from her. This is not so bad as the loss of the revenue, for her milk was very rich in butter fat. She had an inflamed eye at first, and Celeste said there was a burr in it and that he pulled it out, but the eye went on unflaming, and the whole head swelled. George and Howard did what they could for her without avail. They could not seem to decide what was the matter. Mr. Glass was here all day and lectured again this evening. Laura called this P.M. Have written to Chester. (T.S.R. 47. 2 P.M. 65. S.S. 56.)

Mar. 25. Sat. Received a letter from Will and Ada Cooke and wrote to the children in the East. Ada Stemler Parkisons little daughter, born last Monday, died yesterday and was buried today at Brich Church. It had a weak heart. Hannah and Agnes went to sing at the burial. (T.S.R. 44. 2 P.M. 63. S.S. 58.)

Mar. 27. Mon. Elizabeth left this morning. Received letter from Eunice and postal from Calvin and Wrote to Portland. Calvin sends the sad news of the death of his little babe Charles, on the 20th of bronchial pneumonia, lacking one day of being a month old. So brief his life with them! But worse, their little John was taken ill with scarlet fever on the 18th and is quite sick, but they think he will recover. How full of sadness and anxiety their hearts must be! Lord, comfort and sustain them! Myrtle came in. (T.S.R. 44. 2 P.M. 64. S.S. 60.)

Mar. 30. Thurs. Our warmest day, and seemed a little uncomfortable after our long cold Spring. This P.M. Mr. Spencer came with his Camera and took a group photo of our four generations, here in my room - little Stephen, Lottie, Howard and myself in a row, with my pot of beautiful blooming freesias in front. Then Lottie stayed on till evening with baby. He is a dear little boy, and growing finely. (T.S.R. 49. 2 P.M. 77. S.S. 70.)

Mar. 31. Friday. this morning, before I was dressed, I stepped on a live bee, barefoot, and anticipated a swollen and painful limb even to my knee, as once before I had. But our Father eased the pain and it did not swell badly - praise His name! Received letter from Will and Ada Cooke. They will attend the Earl Lectures at the University, given this year in the Greek Theater by Theodore Roosevelt - Ex-President - I am glad they have the opportunity. This evening, our Ladies Aid held their "Spinster's Convention" in our Hall, with a capacity audience. It is a ridiculously funny play, all the characters married women pretending to be "old maids" longing for husbands. Mr. Todd, of Clements, was a professor with a machine to grind them over And make blooming young maidens of them. They also served ice-cream after the performance, and took in over $80. with few expenses. (T.S.R. 48. 2 P.M. 67. S.S. 55.)