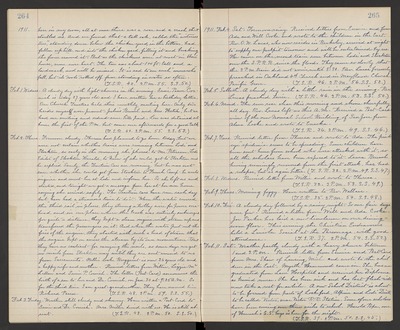 1911. here in my room, all at once there was a roar and a crash that startled us. And we found that a tall oak, called the "witness tree", standing down below the chicken yard, in the bottom, had fallen up hill, and into the chicken yard, filling it and breaking the fence around it. But as the chickens were at roost in their house, none were hart. The tree was about 100 ft. tall and a landmark, and will be missed. It is sad to see such "monarchs" fall, but its roots rotted off from standing in water so often. (T.S.R. 42. 2 P.M. 55. S.S. 50.)

Feb. 1. Wednes. A cloudy day with light showers in the evening. Susie Pascoe Cornish is today 27 years old and I have written her a birthday letter. Our Church Trustees held their monthly meeting here. Only two besides myself were present - Julius Bruml and Mrs. Hatch, but we had our meeting and ordered some bills paid. Lou was detained at home the first of the P.M. but came over afterwards for a good talk. (T.S.R. 42. 2 P.M. 55. S.S. 53.)

Feb. 2. Thurs. Forenoon cloudy. Theresa had planned to go home today, but we were not certain whether trains were running between Lodi and Stockton, so early in the morning she phoned to Mr. Petersen, Lodi Editor of Stockton Herald, to know if she could get to Stockton and he replied "Surely, the Traction Cars are running", but he was not sure whether she could get from Stockton to French Camp - he would inquire and meet her at Lodi and inform her. So she left us and started, and tonight we get a message from her at her own home saying she arrived safely. The Traction cars have run each day but have had a strenuous time to do it. When the water covered the "third rail" in places, they strung a trolley wire for power overhead, and in one place where the track was entirely submerged for quite a distance, they kept a steam engine with steam up and transferred the passengers on it. And when the water put out the fires of the engine, they started with such a head of steam that the engine kept on across the stream by its own momentum. But they have no contract for carrying the mails, so some days we get no mails from Stockton way until they are sent around to us from Sacramento. Nellie Locke Bergquest is now 26 years old and a happy wife and mother. Received letters from Willie, Lizzie McLellan and Susie P. Cornish. The letter (Post-Card) announces the birth of a son to her and Dr. Cornish, on Jan. 30 at 9:25 A.M. So for the third time I am great-grandmother. They have named him Richard Pascoe. (T.S.R. 48. 2 P.M. 59. S.S. 55.)

1911. Feb. 4. Sat. Forenoon rainy. Received letters from Eunice and from Ada and Will Cooke and wrote to the children in the East. Rev. O.W. Lucas, who now resides in Berkeley, arrived at night to supply our pulpit tomorrow and will be entertained by us. He came on the second train run between Lodi and Stockton over the S.P.R.R. since the flood. They came so slowly that the 2 P.M. train did not arrive until 5:30. Rev. Lucas formerly preached in Oakland 4th Church and in Mayflower Church Pacific Grove. (T.S.R. 46. 2 P.M. 56. S.S. 52.)

Feb. 7. Tues. Received letter from Theresa and wrote to Ada. The "pink eye" epidemic seems to be spreading. Some children have been sent home from school who were attacked with it, so all the scholars have been exposed to it. Laura Bruml having seemingly recovered from the first attack, has had a relapse, but is again better. (T.S.R. 32. 2 P.M. 49. S.S. 47.)

Feb. 10. Fri. A cloudy day followed by a rainy night. So our fair days were few. Received a letter from Will and Ada Cooke. Joe Parker has laid a new linoleum on our dining-room floor. This evening the Christian Endeavours held a Lincoln Social at the Parsonage, with good attendance. (T.S.R. 37. 2 P.M. 54. S.S. 52.)

Feb. 11. Sat. Weather partly cloudy with a heavy shower between 1 and 2 P.M. Received letter from Eunice and Post-Card from Mrs. Shaw of Lansing, Mich. and wrote to the children in the East. Myrtle Hammond came in. She has now graduated from Lane Hospital and received her Diploma as trained nurse. She has been sick and has lost flesh - Will now take a rest for awhile. A new School District is about to be formed from parts of Lockeford, Alpine and Lodi Dists. to be called Victor, near Victor R.R. Station. Some of our scholars have been coming over three miles to school. Harold Pope, one of Hannah's S.S. boys in here for the night. (T.S.R. 39. 2 P.M. 50. S.S. 45.)