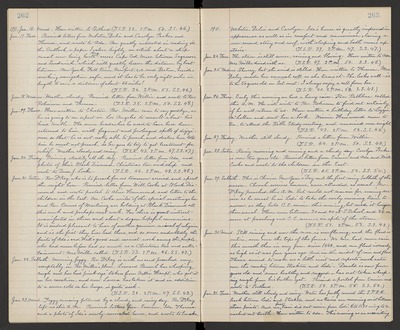 Jan. 17. Tues. Received letters from Webster, Delia and Carolyn Parker and Theresa, and wrote to Ada. Am greatly interested in reading in the Outlook, a paper I value highly, an article about a ship canal now being built dug across Cape Cod, Mass. between Sagamore and Sandwich, which will greatly lessen the distance by boat between New York, Fall River, Newport, &.c. and Boston, besides making navigation safer, and it has to be only eight miles in length to save a distance of about 66 miles! (T.S.R. 32. 2 P.M. 51. S.S. 46.)

Jan. 19. Thurs. Have written to Chester. Rev. Miller came to say goodbye, as he is going to an expert in Los Angeles to consult about his head trouble. The severe headaches he used to have here have returned to him, with frequent and prolonged spells of dizziness, so that he is not really able to preach, and doctors have told him he must not preach, so he goes to try to get treatment for relief. Weather cloudy and rainy. (T.S.R. 43. 2 P.M. 47. S.S. 47.)

Jan. 21. Satur. Rev. DeKay, who is to preach for us tomorrow arrived and spent the night here. Received letter from Will Cooke at Black Diamond and wrote postal to Alice Hammond and letter to the children in the East. Mr. Cooke writes of the special meetings he and Rev. Owens of Martinez are holding at Black Diamond all this week and perhaps next week. For there is great interest manifested in them and about a dozen hopeful conversions. It is indeed pleasant to hear of another genuine revival of religion and is the first they have had there, and so seems undoubtedly the fruits of Ada's and Will's good and earnest work among the people, who had never before had so much as a Christmas tree and entertainment. Mrs. Miller called. (T.S.R. 33. 2 P.M. 46. S.S. 43.)

Jan 22. Sabbath. Morning foggy. Rev. DeKay is with us and preached very acceptably in Rev. Miller's place. Leonard Bruml has whooping cough and has had "pink-eye" taken from Nellie Haupt, who got it on her vacation, and now Laura has taken it and in addition to a severe cold on her lungs, is quite sick. (T.S.R. 30. 2 P.M. 47. S.S. 43.)

Jan. 23. Mond. Foggy morning followed by a cloudy and rainy day. Rev. DeKay left us this A.M. Received letters from Eunice, Ida, Theresa and a photo of Ida's newly-renovated house, and wrote to Eureka,

Jan. 26. Thurs. Early this morning we had a heavy rain. Rev. Rathbone called this A.M. He will write to Rev. Robinson to find out certainly if he will return to us. Have written a birthday letter to Lizzie McLellan and sent her a book. Winnie Hammond came to tea, to attend the Bible Study meeting, and remained over night. (T.S.R. 43. 2 P.M. 52. S.S. 48.)

Jan. 29. Sabbath. This is Chinese New Year's Day and the first rainy Sabbath of the season. Church services however, were attended as usual. Rev. DeKay preached this A.M. but could not remain for evening service as he must be in Lodi to take the early morning train tomorrow, so they held C.E. service this evening, but made at longer than usual. There were between 30 and 40 at S. School, and 20 or more at preaching and C.E. services, in spite of the storm. (T.S.R. 51. 2 P.M. 53. S.S. 48.)

Jan. 30. Mond. Still raining and now the river is overflowing, and the flood is entire, even over the tops of the fences. We have had more rain this month than in any Jan. since 1862, and our flood is nearly as high as it was four years ago. And in the midst of rain and flood Theresa arrived to make us a little visit and reports much water over the country between Stockton and Lodi. Donald is now four years old and seems healthy and rugged - has not taken whooping cough from his brother yet. Received a postal from Eunice and wrote to Portland. (T.S.R. 52. 2 P.M. 55. S.S. 52.)

Jan. 31. Tues. Weather still cloudy and rainy. Water has partly covered the S.P.R.R. track between Lodi and Stockton and no trains are running on it between those points. And our first train did not arrive from Lodi till 1:30 owing to a washed-out trestle. Have written to Ada. This evening as we were sitting