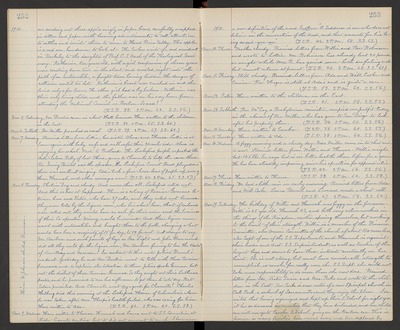 1910. are sending out these apples singly in paper boxes, carefully wrapped in cotton and paper, with booming advertisements, to call attention to settlers and invite them to come to Hood River Valley. This apple is a red one, handsome to look at. The Cookes write of a sad accident in Berkeley to the daughter of Prof. C. S. Nash of the Theological Seminary. Katharine, ten years old, with a girl companion of eleven years were coasting down hill in the street, and coasted right into the path of an automobile, a freight team having hidden the danger of collision until too late. Katherine's breast was crushed in and she lived only a few hours. The other girl had a leg broken - Katharine was their only living child, and the father was on his way home from attending the National Council in Boston. So sad! (T.S.R. 38. 2 P.M. 62. S.S. 56.)

Nov. 7. Monday. Received letters from Lottie, her sister Alma and Theresa. Lottie is at home again with baby, safe and well, after their 20-mile ride. Alma is enjoying her school. Wrote to Portland. The Lockeford people repeated the Anti-Saloon Rally of last Thurs., going to Clements to help the cause there. Rev. Irving Bristol was the speaker, the Lockeford Cornet Band played and there was excellent singing. Eddie took a four-horse load of people up, among them Hannah, and other carriages went. (T.S.R. 42. 2 P.M. 65. S.S. 57.)

Nov. 8. Tuesday. Election Day and cloudy. And worse than all, Lockeford voted wet. And this is how it happened. There is a colony of Russian-Germans between here and Victor, who have 27 votes, and they voted wet because they were told by the liquor men, who live about here, that if saloons were voted out, they would have no sale for their wine and the business of their Co-operative Winery would be ruined. And these liquor men went with automobiles and brought them to the polls, changing what would have been a majority of 15 for day, to 12 for wet. And strange to say, Mr. Ambrose and such parents of boys as Geo. Light and John Hammond did all they could for the liquor men, Mr. Ambrose fearing to lose the trade of Armstrong and Marceau! In contrast to this note Julius Bruml's conduct. Yesterday he and Mr. Dustin went to talk with those Russian- Germans, and to explain the situation to them. Julius speaks German but not the dialect of these Russian-Germans. So they sought out their Lutheran pastor, and he promised to use his influence to get them to vote dry. But Satan prevailed. And Clements went dry-good for Clements! Charles Helberg died this morning at the Lockeford House of tuberculosis, where he was taken after Mrs. Thorpe's health failed, who was caring for him. Have written to Ada. (T.S.R. 42. 2 P.M. 60. S.S. 58.)

Nov. 9. Wednes. Have written to Theresa. Hannah and Laura went to S. S. Convention at Lodi - County Meeting - but it did not amount to much. I have seen

Nov. 16. Wednes. A foggy morning and a cloudy day. Mrs. Miller came in to chat and to sew. Received letters from Willie and Theresa. Willie weighs but 145 lbs. he says, but is in better health than before for a year. He has been steadily improving since his operation for appendicitis. (T.S.R. 42. 2 P.M. 56. S.S. 56.)

Nov. 19. Saturday. The birthday of Willie and Hannah was foggy in the forenoon. Willie is 45 yrs. old, Hannah 43, and both very active workers in the things of the Kingdom, neither sparing themselves, but working to the limit of their strength. Willie is a member of the Finance Committee, also Music Committee of the church of about 500 members, also Supt. of one of the S.S. Departments, and Hannah is organist, choir leader and Asst. S.S. Superintendent, as well as teacher of the largest boys, and seems to have these interests constantly on her heart. She is not strong, but must have considerable strength to accomplish so much, for really were she S.S. Supt. she could not take more responsibility or do more than she now does. Received letters from Ida, Sister Susie and Mrs. Perks and wrote to the children in the East. Rev. Perks is now rector of a new Episcopal church in Oak Park, a suburb of Sacramento, and they enjoy the place. Ida writes that having organized and kept up their S. School for eight yrs. it has so decreased in numbers that they have disbanded, and her children will now go to Eureka S. School, going on the traction car. This is because so many families have moved away and been replaced by