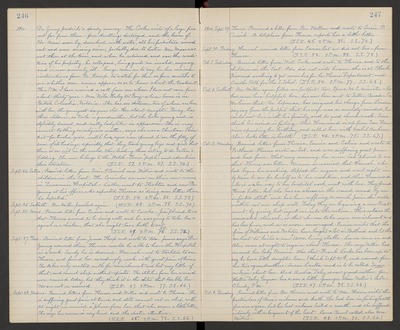 1910. Dr. Young predicts a speedy recovery. The Cookes write of a large fire not far from them - four dwellings destroyed, and the home of Rev. Maar near by, drenched with water, all his furniture moved out, and some missing since, probably due to looters. Mr. Maar was not there at the time, and when he returned and saw the condition of his property, he collapsed, being quite an invalid, anyway, and is now seriously ill. George came in to say he has received instructions from Dr. Knorp to watch for three or four months to see whether more worms appear, so as to know about the treatment. This P.M. I have received a call from one whom I have not seen for about thirty year - Mrs. Viola Haley McGary - whose home is in British Columbia, Victoria. She has six children, two of whom are here with her, the youngest six years old. Her eldest daughter, Pansy, has three children, so Viola is grandmother, but she looks young and is stylishly dressed, and really ladylike in appearance. She is very earnest talking on religious matters, says she was a Christian Scientist for twelve years, until her eyes were opened to see the folly of some of its leadings, especially that they teach young boys and girls that there is no evil in the world, thus leading them astray to do Satan's bidding. She now belongs to the "Watch-Tower" people and advertises their literature. (T.S.R. 57. 2 P.M. 87. S.S. 76.)

Sept. 24. Satur. Received letters from Susie P. Cornish and Willie and wrote to the children in the East. The Cornishes are now in their new rooms in Dunsmuir Hospital. Luther went to Stockton and saw Dr. Young at his office, who reported Theresa as "doing even better than he expected." (T.S.R. 54. 2 P.M. 81. S.S. 73.)

Sept. 27. Tues. Received letter from James Thorp and wrote to Ada. James says Dr. Young assured them Theresa would be able to leave the Hospital in a week. Surely he is deceived. Hannah went to Stockton to see Theresa and found her exceedingly weak, with great pain at times. She takes only malted milk for nourishment and but very little of that, and cannot sleep without opiates. The stitches from her wound were removed today, but they think it is the colitis that troubles her. We are not re-assured. (T.S.R. 47. 2 P.M. 77. S.S. 64.)

Sept. 28. Wednes. Received letters from Theresa and Willie and wrote to Theresa. She is suffering great pain at times, and still cannot eat or sleep well. At night we received a phone from her that she seems a little better. She says her nurse is very kind and the doctor attentive. (T.S.R. 45. 2 P.M. 73. S.S. 66.)

Oct. 1. Saturday. Received letter from Will Cooke and wrote to Theresa and to the children in the East. Ada did not write because she is at Black Diamond working to get members for her Home Department and Cradle Roll for the S. School. (T.S.R. 54. 2 P.M. 77. S.S. 65.)

Oct. 2. Sabbath Rev. Miller again filled our pulpit. Rev. Speers, M. E. minister who has never been helpful here, has now been sent to Sutter, Amador Co. We learn that Rev. Lopeman has resigned his charge from Linden saying from the pulpit that his wife was so worldly-minded, he could not live with his family and do good church work. Some think his mind is failing. Alice Hammond is up from San Francisco spending her birthday, and called here with Mabel Ambrose. Alice looks better in health. (T.S.R. 46. 2 P.M. 75. S.S. 67.)

Oct. 3. Monday. Received letters from Theresa, Eunice and Calvin and wrote to Portland. Theresa wrote on Sat. and was suffering great pain and had fever. That very morning, her nurse had phoned to us that Theresa was better. We were so worried, that Hannah, who had begun her washing, stopped the engine and went right in by train to see for herself as to her condition, and Alice Hammond who is on her way to her hospital work, went with her. They found Theresa better, but she has an abscess in the wound caused by an "infected stitch" and has been suffering so much pain, she could neither eat nor sleep well. Today they are beginning a new treatment, by giving hot injections into the rectum. This relieves the nauseated stomach, so that she can take more nourishment and has less fever, and so is more encouraged. Eunice writes that the firm of Williams and Webster have bought a lot in Portland and let the contract to build a new $16000. livery stable. Laura came in and Alice came at night to inquire about Theresa. She says Nellie has named her baby Bernice. Also that Frank Locke has been up to say he has a little daughter born, I think Sept. 20th, and named for her two-grandmothers - Susan Luella - and is to be called Susan - no Susie about her. And Amelia Daley is now grandmother, for Hattie Daley Gaynor has a son a little younger than Nellie's babe. Cloudy P.M. (T.S.R. 47. 2 P.M. 75. S.S. 62.)

Oct. 4. Tuesday. Received letter from Bro. Horace and wrote to Ada. Horace writes the particulars of Anna's sickness and death. She had been in failing health for over a year, but her last sickness lasted a month, and she suffered intensely with enlargement of the heart. Laura Bruml called, also Mrs. Miller. (T.S.R. 48. 2 P.M. 72. S.S. 66.)