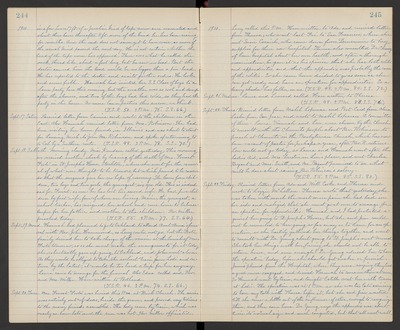 1910. in a few hours 17 ft. of a peculiar kind of tape-worm were evacuated and about three hours thereafter 11 ft. more of the kind he has been seeing for months. And the end does not seem yet to have come, as more of the usual kind passed the next day. He is not certain whether the head of the tape worm has appeared. There was what he called the neck, thread-like, about a foot long, but he saw no head. But the doctor assured him the head would be no bigger than a pin-head. He has reported to the doctor and awaits further orders. He looks and seems feeble. Hannah had invited her S.S. Class of boys to a Lawn party here this evening, but the weather was so cool and damp after the showers, and two of the boys had bad colds, so they had the party in the house. No more lawn parties this season, we think. (T.S.R. 50. 2 P.M. 75. S.S. 66.)

Sept. 17. Satur. Received letter from Eunice and wrote to the children in the East. Also Hannah received letter from Mrs. Robinson. She had been visiting her home friends in Illinois and was about to start for Lansing, Mich. to join Mr. Robinson and spoke of returning to to Cal. by a Southern route. (T.S.R. 48. 2 P.M. 78. S.S. 70.)

Sept. 18. Sabbath. Morning cloudy. Miss Knudsen called yesterday. This morning we received another shock by hearing of the death of Mrs. Forrest Foote in St. Joseph's Home, Stockton, where she went for the removal of what were thought to be tumors, but which proved to be cancer so that the surgeons gave her no hope of recovery. She leaves four children, two boys and two girls, the youngest six yrs. old. This is indeed sad for Forrest, as now he has lost his second wife. He had five children by first wife, four of whom are living. Marie, the youngest, a school-teacher, has resigned her school and come home to be housekeeper for her father and mother to the children. Rev. Miller preached today. (T.S.R. 55. 2 P.M. 77. S.S. 64.)

Sept. 19. Mond. Hannah had planned to go to Oakland to attend Aunt Anna's funeral with Bro. John Hammond, as Lucy could not go, but the Foote family desired her to take charge of the music at the burial of Mrs. Foote tomorrow, so as she must make the arrangements for it today she reluctantly gave up going to Oakland, and John went alone. As they would be obliged to take the earliest train from Lodi and return by the latest, it would be too hard a trip for her anyway. Laura came to arrange for the funeral. Also Edna called and Rev. and Mrs. Miller. Have written to Portland. (T.S.R. 46. 2 P.M. 74. S.S. 66.)

Sept. 20. Tues. Mrs. Forrest Foote was buried this P.M. at Brick Church. The service was entirely out-of-doors, beside the grave, and proved very tedious to the many friends assembled. The body came by train, which was nearly an hour late and the sun was hot. Rev. Miller officiated.

1910. Lucy called this P.M. Have written to Ada and received letter from Theresa, who went last Fri. to San Francisco, where she met Susie Cornish, who came down from Dunsmuir to buy supplies for their new hospital. Theresa also consulted Dr. Cheney of Lane hospital about her own health, and after a thorough examination, he gave it as his opinion that she has both colitis and appendicitis, and that the appendix was probably the cause of the colitis. So she came home decided to go as soon as she can get ready and have an operation for appendicitis. So a heavy shadow has fallen on us. (T.S.R. 48. 2 P.M. 80. S.S. 72.)

Sept. 22. Thurs. Received letter form Mabel Lopeman and Post-card from Alma Locke from San Jose, and wrote to Mabel Lopeman. A Committee of three - Laura, Hannah and Lou, were chosen by the Church to consult with the Clements people about Rev. Robinson to preach at Clements in the Presbyterian Church, which has now been vacant of pastor for perhaps a year, after Rev. R. returns. Lou could not go today, so Laura and Hannah went after the Ladies Aid, and Mrs. Dustin in Lou's place, and met Charles Bryant and Mrs. Swett, and Mr. Bryant promised to see what could be done about raising Rev. Robinson's salary. (T.S.R. 55. 2 P.M. 85. S.S. 80.)

Sept. 23. Friday. Received letters from Ada and Will Cooke and Theresa and wrote to Lizzie McLellan. Theresa wrote that yesterday she was taken with much the most severe pain she had had in her side and realized that she must go at once to arrange for an operation for appendicitis. Hannah and I had protested against her going to St. Joseph's Home, but she and Jim could not be reconciled to her going so far away as to Lane for an operation, so she hastily gathered her things together and went to consult with Dr. Young about going to St. Joseph's next Mond. She took her things with her, fearing she should not be able to return home, and sure enough! Dr. Young advised her to have the operation today, before she should get weaker or feverish. James phoned from the Hospital, where they were, saying they had a good nurse engaged, and desired Hannah to come in there at once. So Hannah went by train, and tonight Estelle met her with team at Lodi. The operation was at 1 P.M. so she was too late arriving to have any talk with Theresa before it, but she and Jim waited till she came a little out of the influence of ether, enough to recognize them, and then came home. Dr. Young says the appendix was about twice its normal size and much congested, but that all went well.