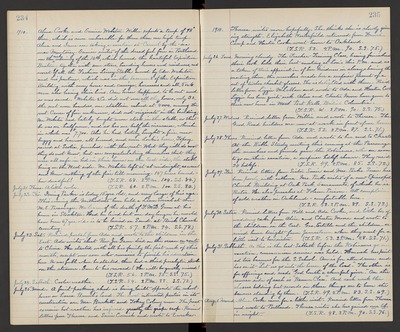 1910. Alma Cooke and Eunice Webster. Willie reports a temp. of 98 degrees there, which is more unbearable for them than our high temp. Alma and Irene are taking a vacation at Carmel-by-the-sea near Monterey. Eunice writes of the dreadful fire in Portland on the early morning of the 14th, which burned the beautiful Exposition Building, together with some stores, boarding-houses and residences, and worst of all, the Fashion Livery Stable owned by Edw. Webster and his partner, which was in the basement of the Exposition Building, with every horse and carriage, harnesses and all, 5 or 6 men also losing their lives. One horse happened to be out and so was saved. Webster & Co. did not own all the horses, only 32, the rest were boarders, one stallion valued at $4000. among the rest. Cause of fire unknown, did not originate in the building. Mr. Webster had lately bought more stock in the stable, so that he was one-half owner, and so has one-half the insurance, which in whole was $7,700. Also he had lately bought a fine, new buggy and harness, all burned, and even Locke's horse, Topsy, raised at Scotia, perished with the rest. What they will do next they do not know, but are congratulating themselves that they were all safe in bed in their home on the East side, the stable being on the West side. Mr. Webster left it at midnight, as usual and knew nothing of the fire till morning. 147 horses burned - how dreadful! (T.S.R. 68. 2 P.M. 104. S.S. 84.)

July 23. Sat. Received postal from Ada and wrote to the children in the East. Ada writes that Rev. Jee Gam died on the ocean en route to China. He started with all his family the first week of this month, except one son who remains to finish his education here. He was feeble when he started, then had a third paralytic stroke on the steamer. Gone to his reward! He will be greatly missed! (T.S.R. 56. 2 P.M. 95. S.S. 75.)

July 25. Mond. A fruit packing shed is being built opposite the school - house on Laura Bruml's land. The most interested parties in its construction are Mr. Burkett and Tokay Colony men. The past excessive hot weather has injured greatly the grape crop. Received letters from Theresa and Susie Cornish and wrote to Eureka.

July 26. Tues. Morning cloudy. The Teacher-Training Class, having finished their book, held their last meeting at Lou's this P.M. and as a token of their appreciation of her kindness in always having the meeting there, the members made her a surprise present of a set of twelve sherbet glasses. She is delighted with them. Rec'd letter from Lizzie McLellan and wrote to Ada and Hester Cooke Lizzie has been quite sick. Alice and Chester Moore have gone to their new home in Port Kells, British Columbia. (T.S.R. 61. 2 P.M. 90. S.S. 75.)

July 28. Thurs. Received letter from Ada and wrote to her and to Chester At the Bible Study meeting this evening at the Parsonage the members and friends gave the Robinsons, who are soon to go on their vacation, a surprise hdkf. shower. They rec'd 24 hdkfs. (T.S.R. 49. 2 P.M. 85. S.S. 72.)

July 29. Fri. Received letters from Sister Susie and Mrs. Perks. Susie has been poorly with asthma. Mrs. Perks writes of a new Episcopal Church Building at Oak Park, Sacramento, of which he is Rector. He also preaches at Folsom Prison. All complain of cold weather in Oakland - comfortable here. (T.S.R. 52. 2 P.M. 89. S.S. 73.)

July 30. Satur. Received letters from Will and Ada Cooke, and little box of wedding cake from Alice and Chester Moore and wrote to the children in the East. Geo., Estelle and the children arrived home tonight from Jamestown where they went for a little visit to her sister. (T.S.R. 53. 2 P.M. 88. S.S. 71.)

July 31. Sabbath. As this is the last Sabbath before the Robinsons go on vacation, communion service was held. Hannah has painted two banners for the S. School. One is for attendance and has on it "Let us go into the house of the Lord". The other is for offerings and reads "God loveth a cheerful giver." On the reverse side of each is "Banner Class." And each week the classes holding best records in there things are to have the banners standing by them. (T.S.R. 49. 2 P.M. 83. S.S. 69.)