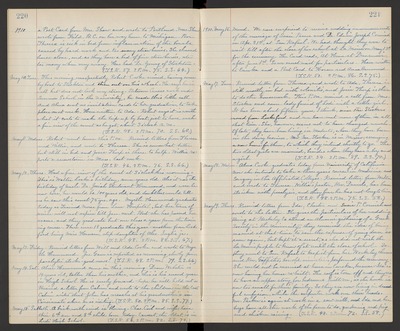 1910 a Post Card from Mrs. Shaw and wrote to Portland. Mrs. Shaw wrote from Field, B.C. on her way home to Michigan. Poor Theresa is sick in bed from inflammation of the bowels caused by hard work and too many strawberries. She cleaned house alone, and as they have a bed of fine strawberries, ate too many when very weary. Has had Dr. Young of Stockton. (T.S.R. 57. 2 P.M. 75. S.S. 64.)

May 10. Tues. This morning unexpectedly, Robert Cooke arrived, having come by boat to Stockton and then out on his wheel. He says he is well but does not look very strong. Between Census work and Summer School in the University, he made this little call and Alma sent us invitation cards to her graduation, to take place next week. Have written to Ada. Robert says it is worth what it costs to make the trip up by boat, just to have such a fine view of the comet as he got, about 3 o'clock A.M. (T.S.R. 48. 2 P.M. 70. S.S. 60.)

May 11. Wednes. Robert went home this P.M. Received letters from Theresa and Willie, and wrote to Theresa. She is somewhat better but still in bed and Josie Thorp is there to help. Willie reports a snowstorm in Mass. last week. (T.S.R. 46. 2 P.M. 76. S.S. 66.)

May 12. Thurs. Had a fine view of the comet at 3 o'clock this morning. This is Walter Locke's birthday, seven years old. Also it was the birthay of Uncle Dr. Josiah Sturtevant Hammond, and were he now here, he would be 100 years old, and doubtless would tell us he saw this comet 75 yrs. ago. Myrtle Hammond graduates today as Trained Nurse from Lane Hospital, but her term of service will not expire till Jan. next. But she has passed her exams. and they graduate but one class a year from the training course. There were 18 graduates this year - another from Lockeford being Miss Hansen, step-daughter of Alex. Inglis jr. (T.S.R. 48. 2 P.M. 82. S.S. 67.)

May 14. Sat. Alice Hammond came in this morning. Dean Webster is 14 years old, taller than his mother, and this is his second year in High School. He is surely forward - hope he will hold out so. Received a letter from Calvin and wrote to the children in the East Calvin writes that John has measles at his grandmother's in Cincinnati where he is visiting. (T.S.R. 50. 2 P.M. 85. S.S. 77.)

1910. May 16. Mond. We were surprised to received wedding announcements of the marriage of Susie Pascoe and Dr. Edwin Joseph Cornish on Apr. 21st, at San Rafael. We had thought they were to wait till after the close of her school at La Moine on May 13th for the ceremony. The Card reads, "At Home at Dunsmuir", after June 1st. So we must wait for particulars. Have written to Eureka and a Post Card to Horace and Anna Hammond. (T.S.R. 52. 2 P.M. 86. S.S. 75.)

May 17. Tues. Received letter from Theresa, and wrote to Ada. Theresa is still mostly in bed with colonitis, and Josie Thorp is there to do the housework. This P.M. received a call from Mrs. Stocker and some lady friend of Lodi with a little girl. It has been about fifteen years, I think, since the Stockers moved from Lockeford and we have met none of them in all that time. She, however, seems not to have changed much. Of late they have been living in Modesto, where they have been in the dairy business. Now Mr. Stocker is in Mexico, arranging a new home for them, to which they intend shortly to go. The two oldest girls are married, besides whom they have a boy and a girl. (T.S.R. 54. 2 P.M. 89. S.S. 70.)

May 18. Wednes. Alma Cooke graduates today from University of California. Now she intends to take a three year's course in Medicine and Surgery in the Affiliated Colleges. Received letter from Willie and wrote to Theresa. Willie's pastor, Rev. Daniels, has been stricken with paralysis, and they fear he has not long to live. (T.S.R. 48. 2 P.M. 75. S.S. 58.)

May 19. Thurs. Received letters from Ida, Chester and Susie P. Cornish and wrote to the latter. She gives the particulars of her wedding. Being at Berkeley to attend an Alumni gathering of a Greek Society in the University, they conceived the idea of being married at that time to save the expense of going down so soon again, but kept it a secret, as she did not wish the La Moine people to know of it until close of school. So they went to San Rafael to keep it from her Berkeley chums and Rev. Griffiths, her old minister, performed the ceremony. She could not be married at home in Eureka, because Ida is now having her house re-built. The roof is torn off and they are to have an upper story for bedrooms built on, as the house is now too small for their family. So they are now living in dreadful confusion, while the carpenter work over their heads. Mr. Parker is again at work in a saw-mill, and Ida and her boys have all the work of the farm to do, gardening and pig and chicken raising. (T.S.R. 48. 2 P.M. 72. S.S. 58.)