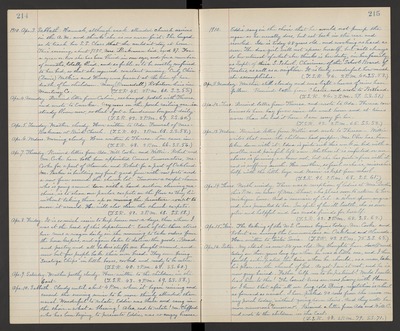 1910. Apr. 3. Sabbath. Hannah, although weak, attended church services in the A.M. and thinks she is no worse for it. She longed so to teach her S.S. Class that she couldn't stay at home. This evening about 9:30, Mrs. Brakeman died, aged 87. For a year or two she has been blind in one eye, and for a number of months, totally blind, and so feeble as to be mostly confined to her bed, so that she required constant nursing. Only Olive (Davis) Watkins and Heney were present at the time of her death, of her children. Mary (Ramsdell) Robertson lives in Monterey Co. (T.S.R. 45. 2 P.M. 60. S.S. 55.)

Apr. 4. Monday. Received letter from Calvin, exchanged postals with Theresa and wrote to Eureka. My roses on the porch railing are in steady bloom now, so that I get a handsome bouquet daily. (T.S.R. 42. 2 P.M. 67. S.S. 60.)

Apr. 7. Thursday. Received letters from Ada, Will Cooke and Willie. Robert and Mr. Cooke have both been appointed Census Enumerators, Mr. Cooke for a part of Alameda and Robert for a part of Oakland. Mr. Parker is building my front yard fence with new parts and a new fence around the church lot. Tomorrow a carpet cleaner who is going around town with a hand suction cleaning machine, is to clean our parlor carpets on the floor as they lie without taking them up or morning the furniture except to move it around. He will also clean the church carpets. (T.S.R. 42. 2 P.M. 68. S.S. 58.)

Apr. 8. Friday. It is so much easier to keep house now-a-days, then when I was at the head of this department. Each of the three stores here runs a wagon daily in the morning to take orders from the housekeepers, and again later to deliver the goods. Bread and pastry and all baker's stuffs are brought around, and now but few people bake their own bread. They even bring "Saratoga Chips" in little boxes, cooked and ready to be eaten. (T.S.R. 40. 2 P.M. 68. S.S. 60.)

Apr. 10. Sabbath. Cloudy until about 4 P.M. when it began raining and caused the evening service to be more thinly attended than usual. Wonderful to relate, Eddie was there and sang in the choir - what a blessing! Also, sad to relate! Mr. Clifford who has been trying to persecute Eddie, was so angry because

1910. Eddie sang in the choir that he would not pump the organ as he usually does, but sat back in the rear and scowled. Ida is today 48 years old, and working as hard as ever. The dear girl will not spare herself, but will always do her utmost of what she thinks is her duty, in her family, as Supt. of their S. School, Chairman of the School Board of Tustees, as well as a neighbor. It is truly wonderful how much she accomplishes. (T.S.R. 46. 2 P.M. 60. S.S. 53.)

Apr. 13. Wednes. Received letter from Willie and wrote to Theresa. Willie writes that since the children had grippe, Mrs. Ober has been taken down with it. Edna is quite sick this week in bed with a swollen and painful left arm. Whether it is infected or an abscess is forming, we know not, but she has quite a fever with it and is suffering much. Her mother, so frail as she is, misses her help with the little boys, and Marie is kept from school. (T.S.R. 41. 2 P.M. 68. S.S. 61.)

Apr. 14. Thurs. North windy. There was a reception of ladies at Mrs. Dustin this P.M. in honor of Mrs. Shaw, who plans soon to return to her Michigan home. And a souvenir of Cal. - a silver spoon engraved, was presented to her, In spite of her ill health, she is energetic and helpful and has made friends for herself. (T.S.R. 42. 2 P.M. 68. S.S. 62.)

Apr. 16. Satur. My eldest is now 54 yrs. old. My thoughts have dwelt much today on those years long ago when he was a little one, and I then fondly anticipated the time when he should, as a man, take his place in the church of God. As yet I see it not, and he is now gray-haired. Father, help me to be patient! Would I could lead him to thee! The locust trees are now heavy with bloom so I know that after all our long, cold Spring, vegetation is about as forward as usual. I have picked 40 roses from the vines on my porch today, without going down stairs. And they will be more numerous tomorrow. Received a letter from Ada and Will C. and wrote to the children in the East. (T.S.R. 48. 2 P.M. 79. S.S. 71.)