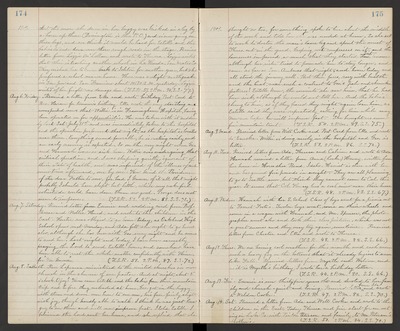 1909. that the mare she drove in here buggy was kicked in a leg by a horse up there (Dorrington is the P.O.) and is now going on three legs, and we think it would be hard for Estelle and the babies to ride down over those rough roads in the stage. Received letter from Lizzie McLellan and wrote to Theresa - Lizzie writes that Alice is teaching another school in La Honda, San Mateo Co. They wished her to come back to Isleton for another year, but she preferred a school nearer home. There was a slight earthquake in San Jose and San Francisco about 10:30 A.M. yesterday. Lizzie writes of her fight no damage done. (T.S.R. 57. 2 P.M. 94. S.S. 77.)

Aug. 6. Friday. Received a letter from Etta and wrote birthday Post-Card to Bro. Horace for tomorrow's birthday. Etta wrote the very startling and unexpected news that Willie is in Framingham Hospital, having been operated on for appendicitis. He was taken with it suddenly last Sat. July 31st and was immediately taken to the hospital and the operation performed that night, as the hospital is located near them. Everything seemed favorable, he is resting easily and an early recovery is expected. So on the very night when Geo. and Hannah were so sick here, Willie was undergoing that critical operation, and I was sleeping quietly, ignorant of their state of health, and was informed of the illness of each some time afterward, one by one. How kind the Providence of the dear Father to me, for had I know of it all that night probably I should have slept but little, while my wakeful solicitude could have done them no good. George does not seem to improve. (T.S.R. 53. 2 P.M. 88. S.S. 71.)

Aug. 7. Saturday. Received letter from Eunice and wedding card from Prof. Bessac and Nellie Hurd, and wrote to the children in the East. Hester was obliged to go home today, as Oakland High School opens next Monday, and Ada felt she ought to go home also, although she has been with Geo. every night and he seems to need her. Last night and today I have been earnestly praying the Lord to send Estelle home, and somehow have been able to rest the whole matter confidently with Him for "He knows." (T.S.R. 51. 2 P.M. 87. S.S. 72.)

Aug. 8. Sabbath. Rev. Lopeman ministered to the united churches in our church in the absence of our pastor - And at night, about 5 o'clock, O joy! Here came Estelle and the babies from their mountain trip and before they unloaded at home, Geo. got in the buggy with them and drove over here to see me, his face fairly alight with joy, though hardly able to walk. I think he was just hungry to see them and will now improve fast. I told Estelle I believed the Lord sent her home, and she replied that she

1909. thought so too, for something spoke to her about the middle of the week and told her she was needed at home. So she set to work to doctor the mare's lame leg and spent the most of Thurs. out in the yard, keeping wet compresses on it, and the lameness improved so much that they started Sat. morn although her sister tried to persuade her to stay longer, and came as far as San Andreas that night, and home today and all stood the journey well. But their faces, rosy with health and the heat, were such a contrast to Geo.'s pale and shrunken features! Estelle knew, the minute she saw him, that he had been sick, although he would not tell her. And the babies clung to him, as if they feared they might again lose him, as Estelle said they were repeatedly calling for him while away. Now we hope he will improved fast. She brought us some fine mountain trout. (T.S.R. 50. 2 P.M. 89. S.S. 75.)

Aug. 10. Tues. Received letters from Ada, Theresa and Calvin and wrote to Ada. Hannah received a letter from Anna (Locke) Henry, written from her home in Horseshoe Bend, Idaho. Haeriet is there with her and has gained five pounds in weight. They are all planning to go to Seattle soon, but think they cannot come to Cal. this year. It seems that Col. Henry has a coal mine near their home. (T.S.R. 48. 2 P.M. 83. S.S. 67.)

Aug. 11. Wednes. Hannah with her S. School Class of boys went for a picnic out to Forrest Foote's. Twelve boys went, some on their wheels and some in a wagon with Hannah, and Mr. Spencer, the photographer went also and took their class picture, which was not a great success and they may try again sometime. Received letters from Chester and Etta and wrote to Theresa. (T.S.R. 48. 2 P.M. 82. S.S. 66.)

Aug. 12. Thurs. We are having cool weather for this month and each morn such a heavy fog on the bottoms that it already begins to seem like Fall. Received letters from Myrtle and Weldon, and as it is Myrtle's birthday, I wrote her a birthday letter. (T.S.R. 46. 2 P.M. 80. S.S. 66.)